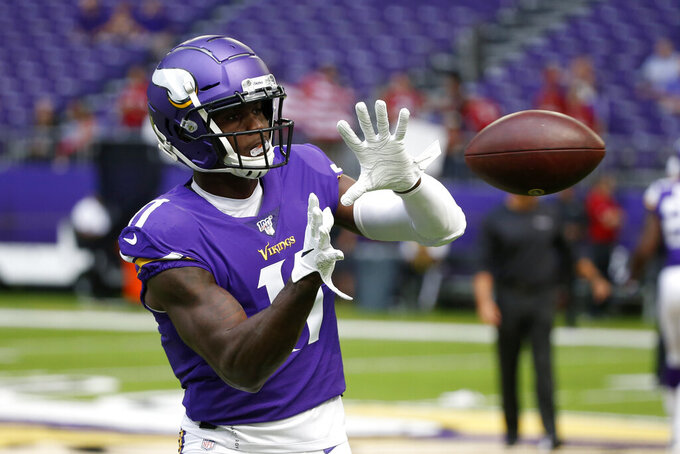 In this Aug. 24, 2019, photo, Minnesota Vikings wide receiver Laquon Treadwell warms up before an NFL preseason football game against the Arizona Cardinals in Minneapolis. The Vikings have brought back a pair of familiar players, signing cornerback/punt returner Marcus Sherels and wide receiver Treadwell. (AP Photo/Bruce Kluckhohn)

The moves were made on Tuesday, when the Vikings placed wide receiver/punt returner Chad Beebe on injured reserve with an ankle injury and waived linebacker Devante Downs.

Beebe was hurt on Sunday in a win over Oakland, when he fumbled for the third time in the past two games. He had two catches for 70 yards.

With Josh Doctson already on injured reserve, the Vikings needed more depth behind Adam Thielen and Stefon Diggs. Treadwell was cut by the Vikings at the end of training camp, after the 2016 first-round draft pick totaled just 56 catches and 517 yards over his first three years in the NFL.

Sherels signed with New Orleans as a free agent in the spring but was let go before the regular season. He has played nine years for the Vikings, holding franchise records for punt return touchdowns (five) and average (10.6 yards).