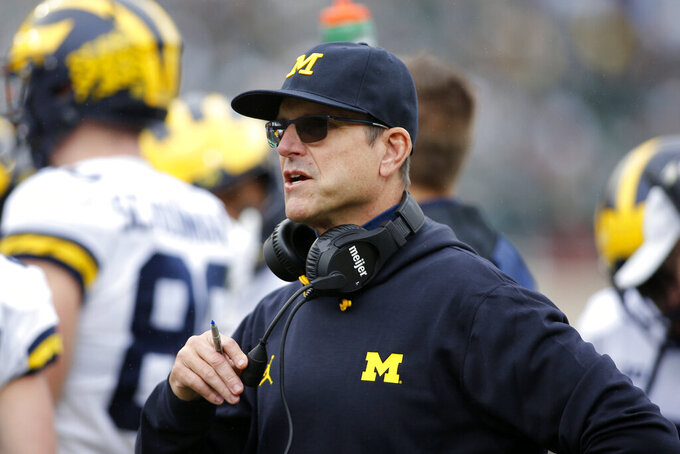 MINNEAPOLIS (AP) — The Minnesota Vikings have entered a fast-paced final stretch of their head coach search, including in their final four candidates the top two assistants for the Super Bowl-bound Los Angeles Rams and one big name from the college ranks: Michigan's Jim Harbaugh.

New York Giants defensive coordinator Patrick Graham is next. Then it's Harbaugh, the head coach at his alma mater for the last seven seasons.

According to a person with knowledge of the process, Graham will interview at Vikings headquarters on Tuesday. Harbaugh will visit on Wednesday. The person spoke to The Associated Press on condition of anonymity because the team was not publicizing the interviews in advance.

The Rams beat the San Francisco 49ers on Sunday to win the NFC for the second time in four seasons. The 45-year-old Morris, who was the head coach of the Tampa Bay Buccaneers from 2009-11, is in his first season with the Rams. The 36-year-old O'Connell is in his second season with the Rams. He overlapped with Adofo-Mensah in 2016, when they both worked for the 49ers.

Harbaugh spoke with the Vikings on Saturday in what was described as an exploratory conversation by both sides to gauge interest.

Harbaugh is 61-24 with the Wolverines, who he led to a win over rival Ohio State last season for the first time under his guidance. They went on to end a school-record, 17-year streak without a Big Ten championship and made the four-team national playoffs for the first time in eight years of the current format.

The former NFL quarterback — who played for the Bears, Colts, Ravens and Chargers — was 44-19-1 as San Francisco’s coach from 2011-14. He went 5-3 in the playoffs, helping the 49ers reach the Super Bowl after the 2012 season. They lost there to the Baltimore Ravens, who were coached by his brother, John Harbaugh.

A little more than a year ago, Michigan gave Harbaugh a new, five-year contract that cut his guaranteed compensation and gave him an opportunity to make up for the financial loss with performance bonuses. Harbaugh bounced back to produce his best season with 12 wins.

Graham and Harbaugh were the only ones of the 10 candidates the Vikings conducted initial videoconference interviews with who surfaced after Adofo-Mensah was hired last week, indicating a particular interest by the team’s new football boss. The 40-year-old Adofo-Mensah was vice president of football operations of the Cleveland Browns for the last two seasons, after seven years in research and development roles with the 49ers.

O’Connell came to the Rams after three seasons with Washington, where he was quarterbacks coach in 2017 overseeing Kirk Cousins. Cousins signed with Minnesota in 2018.

O’Connell was a third-round draft pick by the New England Patriots in 2008 out of San Diego State, playing five seasons in the league as a backup quarterback.

After being fired by the Buccaneers, Morris worked as an assistant on both sides of the ball over stints with Washington (2012-14) and Atlanta (2015-20). His NFL coaching debut was in 2002 with Super Bowl champion Tampa Bay.