Vikings get '20 1st-round pick Reagor in trade with Eagles 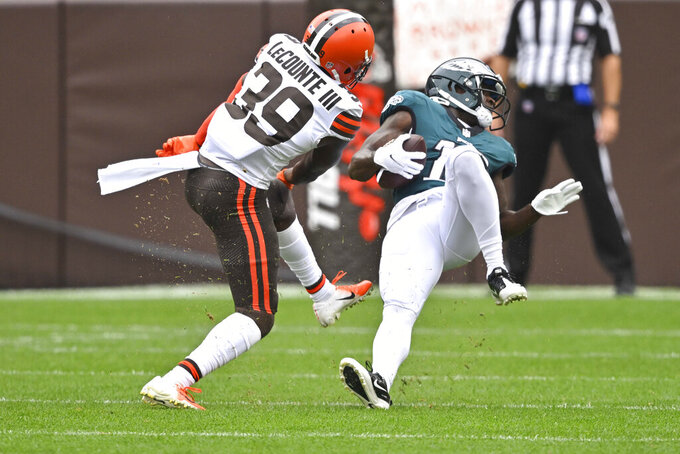 EAGAN, Minn. (AP) — Wide receiver Jalen Reagor was acquired by Minnesota in a trade with Philadelphia on Wednesday, sending two draft picks to the Eagles for the player who was selected immediately in front of Vikings star Justin Jefferson two years ago.

The Vikings dealt a seventh-round 2023 pick and a conditional fourth-round 2024 pick to the Eagles, whose choice of Reagor out of TCU at No. 21 overall in 2020 delighted Vikings officials and allowed them to take Jefferson next out of LSU.

Jefferson has the most receiving yards (3,016) in NFL history over a player's first two seasons. Reagor has 64 receptions for 695 yards and three touchdowns over two years.

With Jefferson, Adam Thielen and K.J. Osborn entrenched as the top three wide receivers, Reagor will bring more value as a punt returner. He returned one punt for a 73-yard touchdown as a rookie and averaged 7.3 yards per punt return in 2021 on 31 attempts.

That's the role the Vikings were targeting for wide receiver Ihmir Smith-Marsette, who was waived to make room on the 53-man roster for Reagor. Smith-Marsette, a fifth-round draft pick out of Iowa last year, had an uneven training camp. As a rookie, he had four kickoff returns for an average of 20.8 yards and took two of his five receptions for touchdowns.

The Eagles have DeVonta Smith, A.J. Brown and Quez Watkins slotted as their top three wide receivers, but team officials raved about Reagor as recently as Tuesday after the roster cutdown.

“There was no doubt in our mind that he deserved a role on this team,” general manager Howie Roseman said.