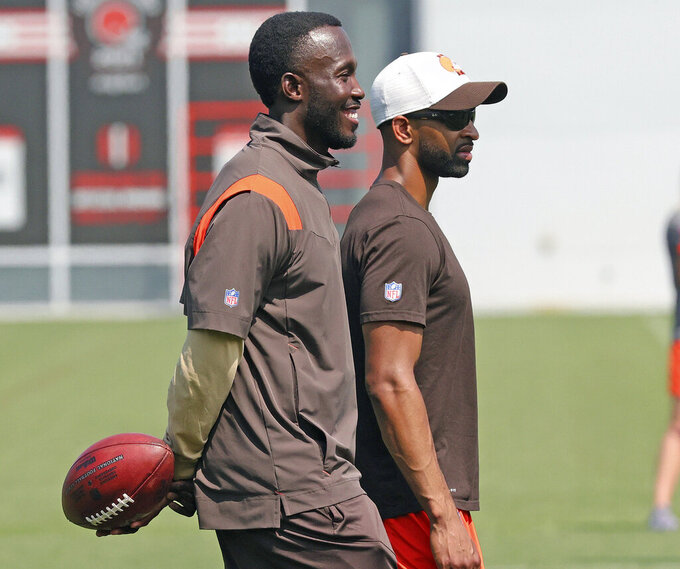 Cleveland Browns Vice President of Football Operations Kwesi Adofo-Mensah, left to right, and GM Andrew Berry watch the action from the sidelines at training camp, August 27, 2021, at CrossCountry Mortgage Campus in Berea, Ohio. Adofo-Mensah has emerged as the front-runner for the Minnesota Vikings' general manager job. Adofo-Mensah was in Minnesota for his second formal interview with the organization on Tuesday, Jan. 25, 2022. (John Kuntz/Cleveland.com via AP)

MINNEAPOLIS (AP) — The Minnesota Vikings have hired Kwesi Adofo-Mensah as their general manager, taking an innovative turn with a Ivy League-educated data expert from Cleveland’s front office who once worked on Wall Street.

Adofo-Mensah, the vice president of football operations for the Browns for the past two years, was one of two finalists the Vikings identified from an initial pool of eight candidates. His contract was finalized on Wednesday night.

The other finalist was Kansas City executive director of player personnel Ryan Poles, who was hired as general manager of the Chicago Bears on Tuesday before he made it to Minnesota for his visit.

“There is so much to appreciate about this organization, an existing nucleus of talent on the roster, top-notch facilities, passionate fans and smart people throughout the building who are committed to winning," Adofo-Mensah said. "I look forward to partnering with our next head coach and our entire football operations staff to begin our work of bringing a Super Bowl to Vikings fans.”

The 40-year-old Adofo-Mensah has an economics degrees from both Princeton, where he was a junior varsity basketball player, and Stanford. He is a native of New Jersey, just like Vikings owners Zygi Wilf and Mark Wilf.

Adofo-Mensah, whose first name is pronounced KWAY-see, was a commodities trader and portfolio manager before entering the NFL in 2013 with San Francisco as a research and development specialist. General manager John Lynch said the 49ers were “crushed” when he left after seven seasons to work for Berry with the Browns.

“He was always the guy that made very practical applications that made sense to everybody," Lynch said. “It was an invaluable resource in terms of scouting, both in the collegiate and free agent levels. A very forward thinker, but also kind of grounded in knowing, ‘Let’s not give them useless information. Let’s come up with information that really helps.'”

Adofo-Mensah served as a de facto assistant general manager under Berry with a hand in all aspects of team operations as the Browns transformed their front office and brought some badly needed stability to the franchise.

“I came up unconventionally, but I think that my background is a positive because I didn’t have any preconceived notions or biases,” Adofo-Mensah said during his introductory news conference with Cleveland reporters in the spring of 2020.

With Poles and Adofo-Mensah, who are both Black, filling vacancies this cycle there are now seven minority general managers in the NFL. The other five are Andrew Berry (Cleveland), Jerry Fontenot (Atlanta), Chris Grier (Miami), Brad Holmes (Detroit) and Martin Mayhew (Washington).

As part of the NFL’s reward system for teams developing minority coaches and front-office personnel, the Browns will receive compensatory third-round draft picks in each of the next two years for losing Adofo-Mensah. The league adopted that rule in 2020.

The Vikings, who fired Rick Spielman on Jan. 10 after 16 seasons with the organization and 10 years with full authority over the roster as general manager, went 8-9 in 2021. They missed the playoffs for the second straight season.

“Kwesi’s infectious energy, critical thinking skills, collaborative spirit and expertise across the football operations/player personnel spectrum made a lasting footprint here in a short period of time," Berry said. "These same characteristics will make him an exceptional leader, problem-solver and roster architect for the Vikings.”

Adofo-Mensah’s background couldn’t be more different from Spielman, the son of a high school coach and older brother of a four-time Pro Bowl linebacker in the NFL. The 59-year-old Spielman worked his way up as a scout for Detroit before landing management positions with Chicago and Miami. He was a meticulous evaluator who frequently stood by himself while the Vikings practiced, carefully watching every drill and play.

The first order of business for Adofo-Mensah, in conjunction with ownership, will be to hire a head coach to replace Mike Zimmer, who was fired after eight seasons on the same day as Spielman.

Ryans was on staff with the 49ers during Adofo-Mensah's last three seasons with the team.