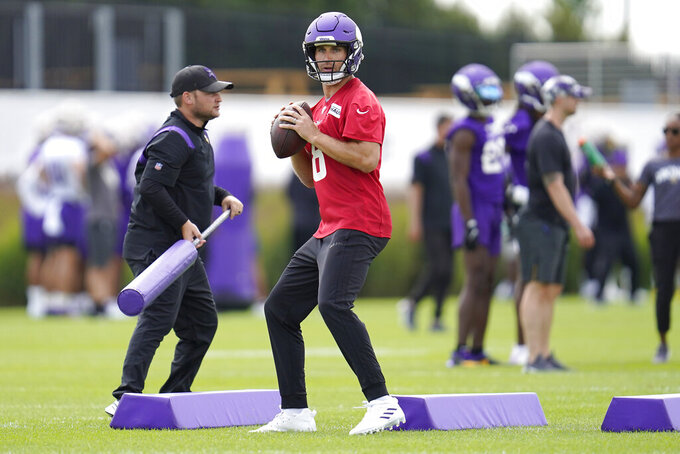 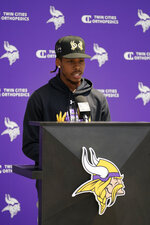 EAGAN, Minn. (AP) — There's a long list of standout NFL wide receivers who have found their footing in Year 3, when that learning curve for complex playbooks, quarterback chemistry and super-skilled cornerbacks starts to flatten and the breakthrough on the field begins.

If Justin Jefferson has yet to hit his stride, well, that's a daunting thought for the defensive backs around the league asked to cover him in 2022 when they face the Minnesota Vikings.

No player in the history of the NFL has totaled more than the 3,016 receiving yards Jefferson racked up over his first two seasons. To hear anyone associated with the Vikings tell it, including Jefferson himself, there was still plenty of meat left on the production table.

Jefferson has gone on the record during the offseason stating his confidence in being able to be the first 2,000-yard receiver. He also has declared Davante Adams, who was recently traded by rival Green Bay to Las Vegas, the best player in the league at their precocious position. That's a label, Jefferson acknowledged again Wednesday before the first full practice of training camp, he's aiming to steal for himself sooner rather than later.

Even if he has a surprising drop-off in production, should extra attention on him yield more catches for Adam Thielen, K.J. Osborn, Irv Smith Jr., Dalvin Cook or anyone else, Jefferson has set himself up for a mammoth payday next spring when he is eligible for his first extension. With new deals doled out in recent months to Tyreek Hill, Cooper Kupp, Terry McLaurin and several others, there are now 12 wide receivers in the NFL with an annual average contract value of $20 million or more, according to salary data compiled by Over The Cap.

“I’m not really too fond of money,” Jefferson said. "I’m really just trying to get that goal of being the best receiver.”

Getting the Vikings back in a groove as a contending team will also go a long way toward his feelings about signing his next deal. After leaving LSU as a national champion, Jefferson has a 15-18 record without an appearance in a playoff game.

The on-field session Wednesday included full participation for tight end Irv Smith Jr., who missed the entire 2021 season after knee surgery. Linebacker Ryan Connelly and wide receiver Blake Proehl are on the physically unable to perform list, still rehabilitating from ACL tears, and cornerback Nate Hairston is on the non-football injury list for an undisclosed reason.

Fans won’t be allowed to watch until Saturday at TCO Performance Center, the sparkling, sprawling, suburban headquarters the Vikings opened four years ago, but even when practice attendance is limited to staff, guests and media. the spotlight on Jefferson remains clear. The player with the nickname “Jet” is, by all accounts, still on the verge of taking off.

“Why not set the record for yards, catches in a year? Why not you?” wide receivers coach Keenan McCardell told Jefferson earlier this year. "What you did last year was good. Now let’s be great.”