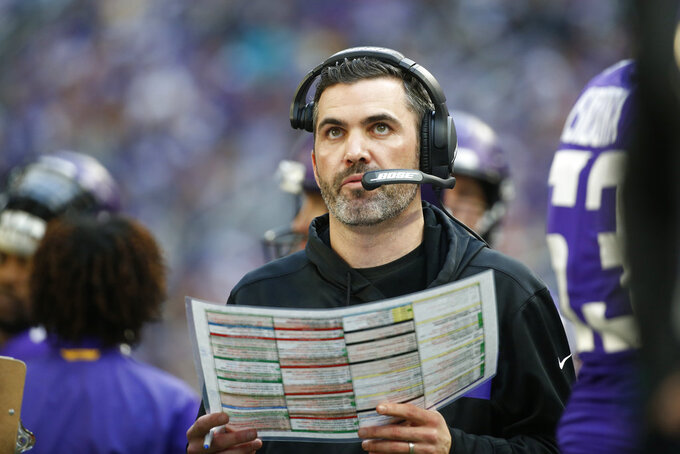 FILE - In this Sunday, Dec. 16, 2018 file photo, Minnesota Vikings interim offensive coordinator Kevin Stefanski watches from the sideline during the first half of an NFL football game against the Miami Dolphins in Minneapolis. The Minnesota Vikings have appointed Kevin Stefanski as offensive coordinator, after his interim stint over the last three games of the season. The 36-year-old Stefanski was promoted on Dec. 11 to replace John DeFilippo, who was fired in his first season on the job amid persistent struggles by the Vikings in moving the ball. Stefanski was a candidate for the head coach vacancy with the Cleveland Browns, who instead picked their own interim offensive coordinator Freddie Kitchens. (AP Photo/Bruce Kluckhohn, File)

MINNEAPOLIS (AP) — Minnesota's offense since coach Mike Zimmer was hired has frequently lacked the scoring punch to keep up with the rest of the league.

Coincidentally or not, continuity has been missing, too.

The Vikings announced Wednesday the appointment of Kevin Stefanski as their offensive coordinator, avoiding another offseason of transition under Zimmer while leaning on the longest-tenured member of the coaching staff to help unearth more production from quarterback Kirk Cousins.

"Kevin is a smart young coach with a bright future," Zimmer said in a statement distributed by the team. He added: "His work ethic and teaching ability have been obvious to me behind the scenes since I came here five years ago. He's well respected by coaches and players both, and I know he's up to the task."

Stefanski was promoted Dec. 11 as the interim replacement for John DeFilippo, who was fired in his first season on the job with the offense in a severe slump. Stefanski's contract expired Tuesday, and in the meantime he was a candidate to be Cleveland's head coach. The Browns, instead, picked their interim offensive coordinator Freddie Kitchens .

The 36-year-old Stefanski, who joined the Vikings in 2006 as an assistant to coach Brad Childress, has coached tight ends, running backs and quarterbacks for the team. He'll be the fourth offensive coordinator in six seasons for Zimmer, following Norv Turner, Pat Shurmur and DeFilippo. Shurmur tried to hire Stefanski a year ago when he became head coach of the New York Giants, but Zimmer turned down the request.

Vikings players were happy to have him back. During his three-game stint, Stefanski drew praise for simplifying the playbook and not displaying any panic in his first foray as a play caller. In his first game, the Vikings scored a season-high 41 points in a victory over Miami, though they stumbled again in the final week against Chicago and missed the playoffs.

The Vikings were 19th in the NFL in points and 20th in yards this season, after finishing 10th and 11th respectively under Shurmur in 2017. Those were the highest rankings under Zimmer, the only time they've cracked the top 15 in either category in five years.

Cousins, who signed a three-year, $84 million contract that's fully guaranteed, had career highs in touchdown passes (30) and completion rate (70.1 percent) but struggled to help the Vikings move the ball in several critical games.

"I was thrilled to hear that he'd be back," Cousins said in a statement distributed by the team. "We feel like the continuity is very important, not only for me at the quarterback position but for our entire offense."