Vikings LB Kendricks has done vital work on and off field 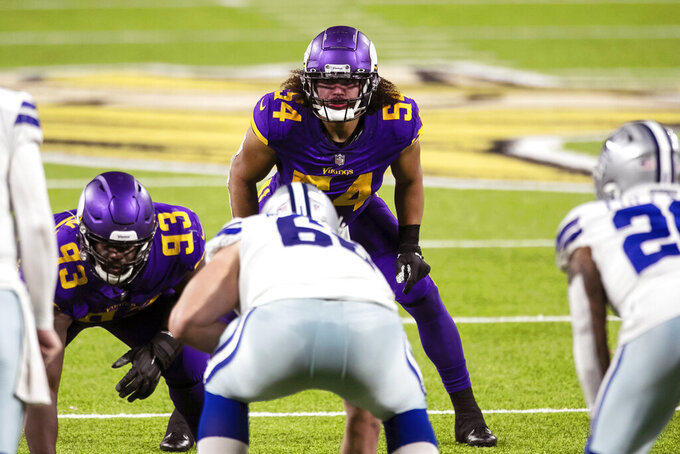 FILE - In this Sunday, Nov. 22, 2020 file photo, Minnesota Vikings middle linebacker Eric Kendricks (54) readies for the play in the second quarter during an NFL football game against the Dallas Cowboys in Minneapolis. Eric Kendricks and the Minnesota Vikings have had a rough year between the lines, but the 2019 All-Pro linebacker, whose 2020 season has been shortened by a calf injury, has made quite an impact off the field. He’s the team’s nominee for the Walter Payton Man of the Year award, for his community work focused on criminal justice reform. (AP Photo/David Berding, File)

MINNEAPOLIS (AP) — Eric Kendricks was playing at an All-Pro level again this year when the Minnesota linebacker hurt a calf muscle, which has now sidelined him for all of December.

Though the injury to an irreplaceable player was one of many setbacks for the Vikings in a season with more downs than ups, Kendricks' most vital work of this tumultuous 2020 was already in full swing off the field.

Kendricks was named the team’s nominee for the Walter Payton Man of the Year Award, the annual recognition for an NFL player’s outstanding community service. The relevancy of his effort was never more evident than during the offseason, when worldwide racial unrest was sparked by the killing by police of George Floyd, which took place just a few miles from the stadium where Kendricks normally directs the middle of Minnesota's defense.

“He’s been a leader since the moment he stepped into this building by the way that he carries himself, by the way that he handles himself on and off the field, by the way he plays this game with intensity and character and effort every single game,” Vikings wide receiver Adam Thielen said, “but I think recently he’s felt it upon his heart that he could help make change, and he’s doing that.”

For all the awareness and support Kendricks has helped raise for his favored causes — namely criminal justice reform and thwarting juvenile hunger — there's no asset more valuable than a personal connection.

Like the letters frequently exchanged with kids housed at the Hennepin County juvenile detention center. Such as the conversations at Minneapolis nonprofit All Square with formerly incarcerated individuals participating in a one-year fellowship anchored in mental health, wealth creation and entrepreneurial development.

“He actually has passion and empathy that was on a totally different level. It really connected with us, and we love his presence. He’s human, and that validates us as humans as well,” said Terrein Gill, a graduate of All Square, which operates a craft grilled cheese restaurant to employ program members and aims to start a law firm next fall that will aid legal studies for the imprisoned, among other goals.

Kendricks presented a $250,000 grant from the Vikings and their player-led social justice committee to All Square this year.

“Time is important when somebody takes it out of their life and gives it to you," said All Square fellow Randall Smith. "I’m appreciative of that because time is something you can’t ever get back.”

Emily Hunt Turner, All Square's founder, saw her organization and Kendricks quickly strike a chord with each other.

“He’s been great at building real relationships, not just helicoptering in, take a photo op and bounce,” Hunt Turner said.

Kendricks grew up in Fresno, California, where his father fought a drug addiction and some of his friends ran afoul of the law. That's when seeds were sewn for his passion for combating recidivism, the tendency of a convicted criminal to reoffend.

Another one of his partner charities is Every Meal, which seeks to end food insecurity among children in Minnesota. The correspondence received from the juvenile detention center only underscored that need for him. Kendricks estimated that 70% of his pen pals told him they regularly don't get enough food to eat.

“They’re making irrational choices when their backs are against the wall. They're already hungry. They have no supervision at the house, they tend to get in trouble and they tend to get a little bit more aggressive," Kendricks said.

“Yes, there are people who make mistakes in life, but those mistakes define them for the rest of their life. These people can be productive members of society if you just give them the right chance that they’ve never had before.”

The weight of the state of the world hit Kendricks hard after the death of Floyd, the Black man in handcuffs killed when a white police officer pressed his knee on Floyd's neck for nearly eight minutes, even as Floyd pleaded that he couldn’t breathe.

Kendricks and a handful of Vikings teammates met soon after that with the Minneapolis police chief to talk about justice, race and reform. He was also one of the NFL players who pressed Commissioner Roger Goodell for more league action on the issues.

“What stood out to me was his willingness to do that and put himself out there and be the voice of not only himself but kind of for our team,” linebacker Eric Wilson said.

Even if it wasn’t exactly second nature.

“I always wanted to give back, and I always felt myself really try to be involved, but I just didn’t feel like I needed to be putting it out there as much," Kendricks said. "It is a fine line, and with these events that have occurred I realized that my platform is larger than most and I actually do have an influence so maybe I need to be speaking up a little bit more.”