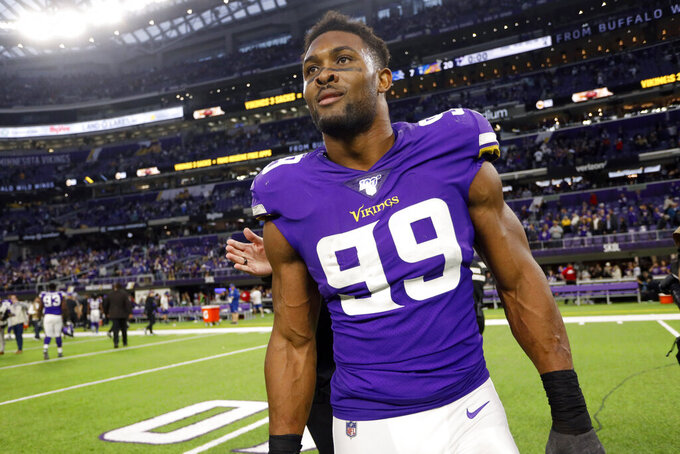 FILE - In this Sunday, Dec. 8, 2019 file photo, Minnesota Vikings defensive end Danielle Hunter walks off the field after an NFL football game against the Detroit Lions in Minneapolis. The Minnesota Vikings have placed defensive end Danielle Hunter on injured reserve. The move takes one of their most vital players out of action for the season opener against Green Bay and at least two more games after that. (AP Photo/Bruce Kluckhohn, File)

MINNEAPOLIS (AP) — The Minnesota Vikings placed defensive end Danielle Hunter on injured reserve Wednesday, taking one of their most vital players out of action for the season opener against Green Bay and at least two more games after that.

Hunter has not practiced with the team since training camp activities were first opened to reporters on Aug. 14. Coach Mike Zimmer has only described the unspecified injury as a “tweak,” and because Hunter was placed on injured reserve the Vikings didn't have to list the two-time Pro Bowl pick on their initial injury report.

Last year, Hunter, who will turn 26 on Oct. 29, became the youngest player in NFL history to reach 50 sacks. Hunter has never missed an NFL game to injury, with his only absences coming as a rookie in 2015 when he was on the inactive list for two September games. When the Vikings played a meaningless finale against Chicago last season with their spot in the playoffs already clinched and rested almost all of their starters, Hunter took the first snap to stretch his appearance streak to 77 straight games.

“Danielle, he brings a whole other type of game in. It’s going to be hard to replace a guy like that,” linebacker Eric Kendricks said, "but we have guys who are hungry and want to step up, too.”

Revised roster rules for the 2020 season, which is being played during the coronavirus pandemic, allow NFL teams to reinstate players from injured reserve after only three weeks. There's also no maximum amount of players who can come back. Normally, only two players can be designated for return from injured reserve, and they must miss at least six weeks of practice and at least eight weeks of games.

The other softening of this blow for the Vikings was the acquisition of defensive end Yannick Ngakoue in a trade last month with Jacksonville. Ngakoue will essentially replace Everson Griffen, who departed after 10 seasons to sign with Dallas. Ifeadi Odenigbo, who had seven sacks last year, is the next defensive end on the depth chart. Jalyn Holmes has mostly taken Hunter's place with the first team during the portion of practices that have been open to the media.

“He’s a fantastic player,” said Packers quarterback Aaron Rodgers, who has been sacked 5 1/2 times by Hunter in nine matchups. “That’s definitely a loss for their defense.”

After hosting Green Bay on Sunday, the Vikings play at Indianapolis on Sept. 20 and return home to face Tennessee on Sept. 27.