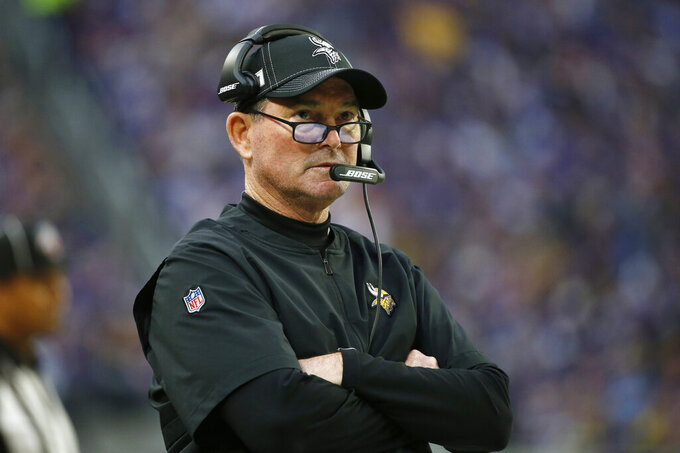 FILE - In this Dec. 8, 2019, file photo, Minnesota Vikings head coach Mike Zimmer watches from the sideline during the first half of an NFL football game against the Detroit Lions in Minneapolis. The Vikings signed head coach Zimmer on Friday, July 24, 2020, to a three-year contract extension through the 2023 season. Zimmer’s record with the Vikings over six years is 57-38-1, plus 2-3 in the postseason. (AP Photo/Bruce Kluckhohn, File)

MINNEAPOLIS (AP) — The Minnesota Vikings signed head coach Mike Zimmer to a three-year contract extension through the 2023 season, finalizing a key piece of business Friday before the beginning of training camp.

Zimmer has a 57-38-1 record over six years, the third-best winning percentage (.599) of the nine head coaches the franchise has had over 59 seasons. The 64-year-old Zimmer trails Bud Grant (.621) and Dennis Green (.610) on the team list, and he's seventh in winning percentage among active NFL head coaches with a minimum of 50 games.

The new deal, which was agreed upon earlier in the week, was hardly a surprise for an organization that has prided itself on stability since owners Zygi Wilf and Mark Wilf took over in 2005. Zimmer also had his contract extended at the commencement of training camp in 2016.

“Coach Zimmer brings an intensity and consistency to the field that our players and fans alike appreciate. He holds his players and staff to a high standard and will continue to guide the Vikings to long-term success,” Zygi Wilf said in a statement distributed by the team.

Zimmer is 2-3 in the playoffs, with an appearance in the NFC championship game after a 13-3 finish in 2017 season the highlight of his tenure. The Vikings have won the NFC North division twice, and they qualified for a wild card spot last year. Their victory on the road over New Orleans in the first round likely secured his status.

Zimmer's son, linebackers coach Adam Zimmer, will serve as co-defensive coordinator with defensive line coach Andre Patterson this year. Training camps are on track to start with a slow rollout next week, after NFL owners and players reached agreement Friday on protocols for the COVID-19 pandemic that limited offseason work to video conference calls.