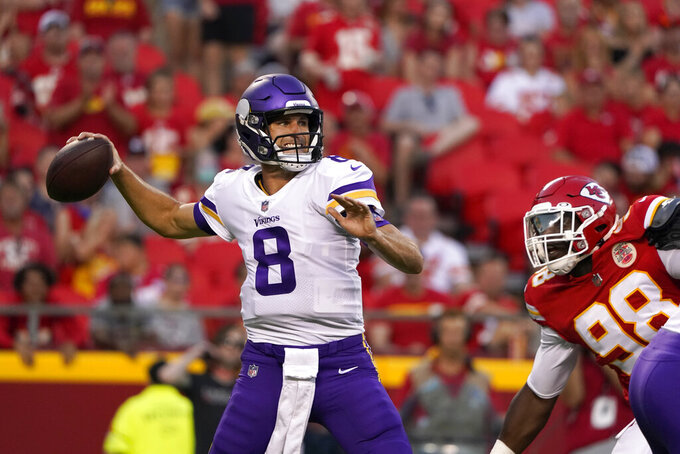 Smith had the procedure done by team physician Dr. Christopher Larson after being injured in the team's last exhibition game Friday at Kansas City. He was in line for a breakout, his third in the NFL, on the heels of the departure of 10-year veteran Kyle Rudolph. Smith had 365 yards and five touchdowns in 13 games last season.

“He’s just a great football player, and there’s no reason to think he wasn’t going to have a great year,” quarterback Kirk Cousins said. “But he’s got a lot of good football ahead of him. I would expect whenever he’s back the same great player that he was.”

The Vikings acquired tight end Chris Herndon in a trade Tuesday with the New York Jets to help reinforce the position. He'll need some time to adjust to a new playbook, so Tyler Conklin is likely to take the lead when the Vikings start the season Sept. 12 at Cincinnati. Both Herndon and Conklin are in their fourth years in the NFL.

Smith had a full repair of the meniscus, coach Mike Zimmer said. That usually means a minimum four-month recovery, so the best-case scenario would be the Vikings making the playoffs and Smith being a fast healer.

The 2019 second-round draft pick from Alabama just turned 23, though, so there's not going to be a rush to bring him back at the risk of future trouble. In fact, Smith opted for the full repair to guard against future arthritis in the joint that could have shortened his career. The meniscus is cartilage that acts as a shock absorber between the femur and tibia, the thigh and shin bones.

“It’s just one of the tough breaks in this game,” Cousins said. “But he’s so young. He’s got a lot of good football ahead of him, so this is just going to be a bump in the road.”

With 11 days remaining before the regular season starts for the Vikings, the roster came more into focus Wednesday, the day after the 53-man cutdown. Smith, rookie running back Kene Nwangwu (knee) and second-year wide receiver Dan Chisena (undisclosed), a special teams ace, were placed on injured reserve. Teams can now use injured reserve as a short-term option, with players only required to miss three games.

Tight end Ben Ellefson, a native of Hawley, Minnesota, who played at North Dakota State, was claimed off waivers from Jacksonville. Brandon Dillon is the other tight end currently on the active roster, and rookie tight end Zach Davidson was among the 14 players added to the practice squad, leaving two vacancies for the time being.

Running back Ameer Abdullah and guard Dakota Dozier were the most prominent names among the 14 players players signed Wednesday to the 16-man practice squad, which has opened to veterans as part of the NFL rules changes to adjust to the volatility of the COVID-19 pandemic.

Defensive end Everson Griffen and long snapper Andrew DePaola were re-signed one day after being released, which deprives the vested veterans of having their base salaries guaranteed for the entire season if they were to be let go again later this year.