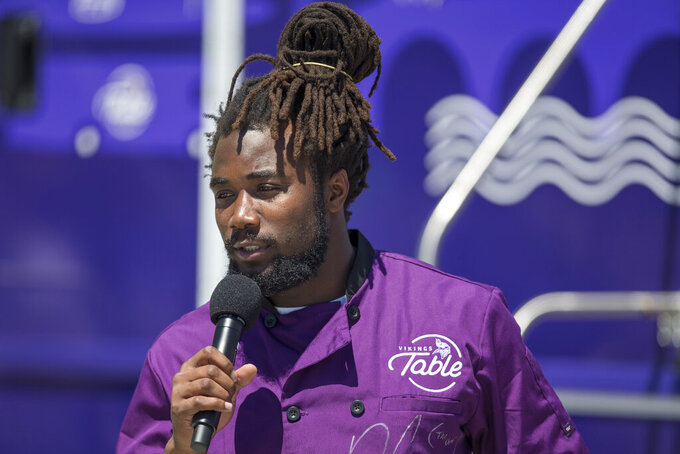 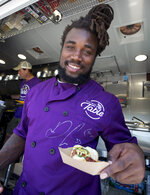 EAGAN, Minn. (AP) — Dalvin Cook's rookie year was dominated by his rehabilitation from reconstructive knee surgery, and his second season included recuperation from a significant hamstring strain. The arduous process of recovery from injuries quickly made the Minnesota Vikings running back realize the necessity of eating right.

When he entered the NFL, Cook could hardly have envisioned spinach as the centerpiece of one of his meals. Now, he's made youth nutrition his chief charitable cause, trying to help kids embrace the value of healthy foods.

"I just started seeing some of the stuff I was eating, and I was like, 'I never would've had this two years ago,'" Cook said. "So just imagine if I was 10 years old? Just to give them a jump-start on how to do things, to get a message out there and show them how it's supposed to be done."

When school is out, especially in the summer, many children in low-income households can find meals harder to come by. The Boys & Girls Club of the Twin Cities works with about 9,000 kids, with 90% of them eligible for free or reduced-price lunch, according to senior director of corporate and public relations Tim Schober.

Vikings chief operating officer Kevin Warren saw his own awareness rise when his daughter, Peri, founded a food delivery business to bring healthy food to underserved residents of the north side of Minneapolis.

"I didn't quite understand the level of it until I helped her deliver food a couple times on weekends," Warren said. "There are people right here in our touchpoint that are really struggling, that don't eat healthy, and it impacts every area of their life."

When the Vikings relaunched their philanthropic arm in 2017, they prioritized childhood hunger, fitness and achievement gaps, with a goal of actively creating their own programs in partnership with local nonprofits rather than the old model of simply issuing grants. The first major initiative was a food truck to serve nutritious meals to needy kids in the area, in conjunction with organizations already addressing food access.

"You think about developing countries having hunger issues, but it exists in our own backyard," said Vikings Foundation executive director Brett Taber. "Food trucks are very popular, so this eliminates some of that social stigma of receiving a free meal."

The association with the local professional football team helps, too.

"With the Vikings being involved, it gives it a different feel," Schober said. "Now, it's a big special event and everyone is participating and you can take some of the potential embarrassment away."

The concept is similar to an "eye mobile" the Eagles Charitable Foundation has deployed in the Philadelphia area since 1996 to offer free eye exams and prescription glasses to needy children .

Boosted by a seven-figure pledge from Xcel Energy, the project also will be funded by sales from the food truck with a separate menu at Vikings games, training camp practices and other events. Profits will be directed back to the summer youth meal service. The back of the truck has an 80-inch monitor to show videos about healthy eating. Local food truck entrepreneurs Tony and Haley Fritz will be operating, maintaining and staffing the truck.

"The hope is to have some kind of an effect on people. It's kind of an event so they want to be a part of that," Haley Fritz said. "We're trying to say: 'Hey, this is cool. The Vikings eat turkey tacos, too.' The hope is that they just keep us overly busy and we just keep feeding as many people as we can."