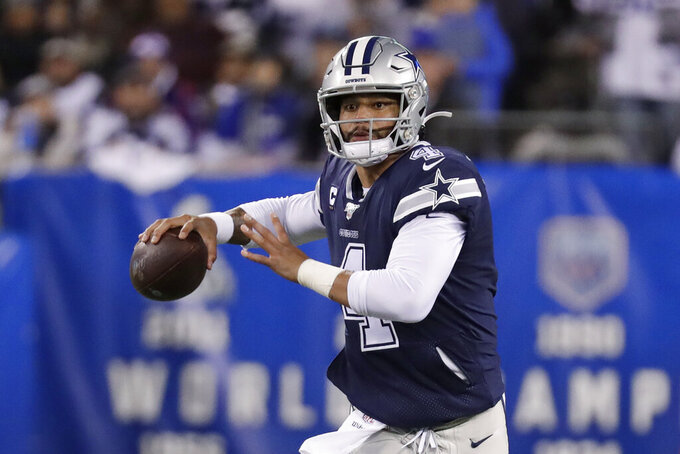 Dallas Cowboys quarterback Dak Prescott (4) rolls out of the pocket to pass during the first quarter of an NFL football game against the New York Giants, Monday, Nov. 4, 2019, in East Rutherford, N.J. (AP Photo/Adam Hunger)

ARLINGTON, Texas (AP) — Ezekiel Elliott doesn't feel the need to declare himself the best running back in the NFL with the two-time rushing champion and the Dallas Cowboys set to face current leader Dalvin Cook and the Minnesota Vikings.

Two months after becoming the highest-paid back by ending a preseason-long holdout and signing a $90 million extension, Elliott is sixth in the rushing race with 741 yards, 153 behind Cook in one fewer game.

Elliott is also on one of his best rolls, looking to match a career best with a fourth straight 100-yard game at home against the Vikings (6-3) on Sunday night, the third straight prime-time game for the Cowboys (5-3).

"I think there have been running backs that have played better this year," Elliott said.

And that suggestion doesn't bother a two-time Pro Bowler who was an All-Pro as a rookie in 2016.

"It just kind of adds a little fuel to the fire," said Elliott, whose 4,789 yards rushing since entering the league are almost 1,000 yards more than anyone else. "I've got some more work to do, that's all."

Cook needs 106 yards to become Minnesota's first 1,000-yard rusher since Adrian Peterson in 2015, when Peterson won the last of his three rushing titles for the Vikings.

"Any time you can be mentioned with a guy like that is awesome," said Cook, who is second in the NFL to Christian McCaffrey with 1,232 scrimmage yards. "It's a guy that's highly recommended in this organization and I'm just proud of being in the conversation."

But for Cook, the conversation is really more about Elliott. Born 23 days after the former Ohio State star in the summer of 1995, Cook came out of Florida State a year later than Elliott and was drafted in the second round.

So next summer, Cook could be going into the final year of his contract because Minnesota doesn't have a fifth-year option on him. The Cowboys had that with Elliott, the fourth overall pick in 2016, so there were two years left on his contract when he held out this past summer.

To Cook's point, the first meeting between the teams since Elliott and quarterback Dak Prescott were rookie sensations in 2016 is important in what is shaping up to be a difficult playoff chase in the NFC.

The defending NFC East champion Cowboys lead Philadelphia by half a game. The Vikings trail Green Bay by a game in the NFC North and currently hold the last playoff spot in the conference. Plus, the offenses and defenses of both teams are all ranked in the top 10.

"This is the toughest test we've had as an offense going against this defense," said Dallas tight end Jason Witten, back for a club record 16th season after a year in retirement as a broadcaster. "So I think it would be foolish to be thinking about something down the road."

Prescott and Minnesota's Kirk Cousins see other for the first time since they were division rivals when Cousins was in Washington. Prescott was 4-0 in those meetings his first two seasons, and Cousins is 1-6 in his career against the Cowboys.

In their last 10 road games against teams with a winning record at the time, the Vikings are 0-9-1. Their last such victory was at Atlanta on Dec. 3, 2017, before Cousins arrived.

The lack of big-game wins has been a knock on the eighth-year quarterback, including last week's 26-23 loss to Kansas City when the Chiefs were without Patrick Mahomes. Beating Dallas, in prime time no less, would be a big lift for more than just Minnesota's postseason bid.

"If you're going to be a playoff team, you have to win tough games in tough environments at some point," Cousins said. "Otherwise you're probably not getting into the playoffs."

Top Dallas receiver Amari Cooper isn't sure he'll be able to play after aggravating a knee injury he sustained in practice the week before Monday's 37-18 win at the Giants. Cooper left during the first series, but came back to catch a 45-yard touchdown.

The Vikings haven't allowed any points off turnovers in five straight games. Cousins has gone three straight games without a turnover, matching the longest streak of his career since he became a full-time starter with the Redskins in 2015.