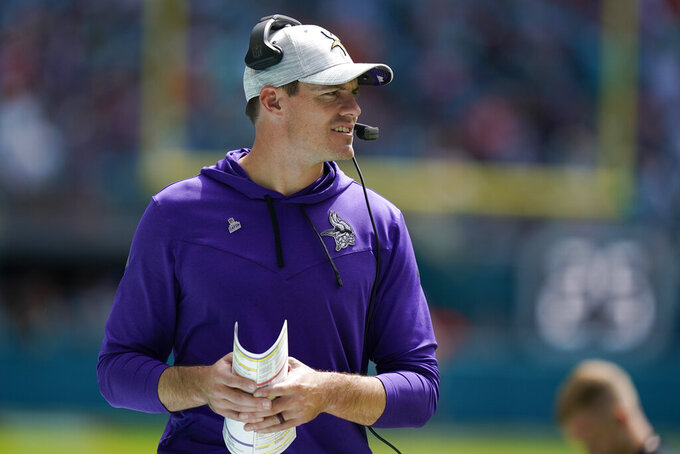 MINNEAPOLIS (AP) — More than one-third of the way through their first season under coach Kevin O’Connell, the Minnesota Vikings have the only two-game lead among the NFL’s eight divisions.

The question about how close this team is to seriously contending for the Super Bowl — with a roster mostly similar to the one that missed the playoffs the last two years — remains unanswered.

With their strong start ahead of an unusually large middle of the pack in the NFC, though, the Vikings have at least set themselves up for some meaningful football down the stretch. This much is clear: Good vibes and hidden strengths go a long way toward success in this sport.

“At the end of the day, we just find a way,” wide receiver Adam Thielen said after the 24-16 win at Miami on Sunday gave Minnesota a 5-1 record entering its bye week.

The Vikings have a plus-33 point differential in the final 4 minutes of either half. That’s the best margin in the NFL through six weeks, according to Sportradar. Last season, they were dead last at minus-73. In 2020, they were third-worst in the league at minus-53.

The previous coaching staff under Mike Zimmer spent plenty of practice time on those vital scenarios, but there’s clearly a winning spirit present with this group that has been missing in Minnesota in recent years. The Vikings have won four straight games, all by one score.

“It comes down to those margins and how can we be good on some plays and situations that maybe don’t always get talked about on Monday morning, but they’re winning plays and winning philosophies for us,” O’Connell said. “Those margins become even smaller, and we’re going to have to be that much better.”

O’Connell and his staff have implemented a curriculum of sorts called “Situational Masters,” one of several pieces of the program he learned and copied from the Super Bowl champion Los Angeles Rams under coach Sean McVay.

Ryan Cordell, who serves as game management coordinator, and Mike Pettine, the assistant head coach, lead the weekly sessions highlighting applicable sequences from around the league that can determine the difference between winning and losing.

“You have to be trained to know the situation,” quarterback Kirk Cousins said.

The Vikings praised cornerback Cameron Dantzler II for his foresight to slide after stripping the ball away from Chicago’s Ihmir Smith-Marsette with a seven-point lead with a little more than one minute left. The Bears were out of timeouts, so ensuring the Vikings kept possession — instead of giving it back after a touchdown or, worse, a fumble during the return — guaranteed they could end the game on their terms.

“You see guys like actually watching other games and learning from them before we even talk about it, which is cool,” Thielen said.

The Vikings have outweighed their No. 25 ranking in the NFL in yardage differential with several other influential factors.

They have taken just 185 penalty yards, the fewest in the league. The Rams (24) are the only team with fewer penalties against them than the Vikings (25). Their turnover margin (plus-four) is the second-best in the NFL. They’re also seventh in the league in third-down defense, allowing a 34.7% conversion rate.

Whether this promising early-season performance by the Vikings is attributable to strategic advancements by the staff, increased confidence for the players that comes from a rejuvenated environment around the practice facility, or simply a healthy dose of good luck, they’re on the right track under the new regime.

Not to be overlooked, either, is the impact of new executive director of player health and performance Tyler Williams, another arrival from the Rams. The sports science techniques being applied by Williams and his staff have paid off with a remarkably low number of soft-tissue injuries. The only starter who has missed a game is safety Harrison Smith, who had a concussion. The Vikings have also navigated a long trip to London and a hot visit to Miami.

The kicking game is another critical piece that can quietly make the difference between an average team and a championship contender, and the Vikings under new special teams coordinator Matt Daniels have been thriving on just about every unit.

They lead the league with an average starting field position differential of 7.5 yards better than their opponent, a telling measure of effective kick coverage and returns.

Rookie punter Ryan Wright had 10 punts for a net average of 43.9 yards that included a 73-yard boomer from his own end zone that sent Dolphins speedster Tyreek Hill backpedaling for a 2-yard loss on the return. Wright was named NFC Special Teams Player of the Week.

“One critical error can literally dictate the win or loss of a game. So for us, the mindset going into it is to have a positive impact on the football game every single time we step out there,” Daniels said.