Virginia, Texas Tech get defensive to move to title game 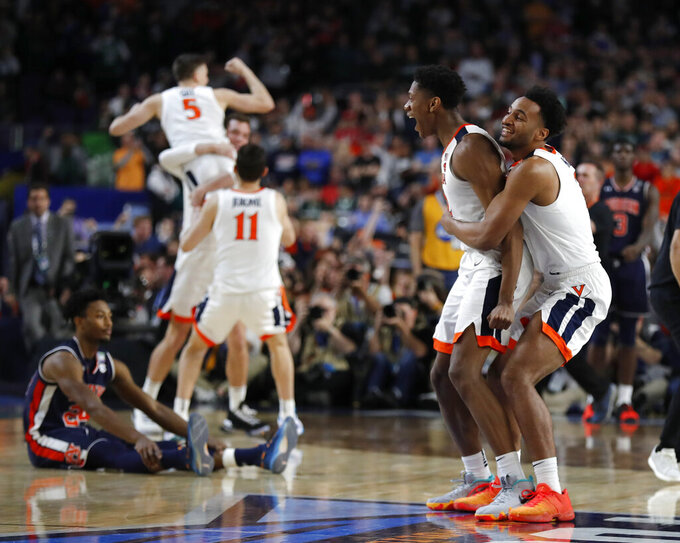 Virginia players celebrate at the end of a semifinal round game against Auburn in the Final Four NCAA college basketball tournament, Saturday, April 6, 2019, in Minneapolis. (AP Photo/Charlie Neibergall)

MINNEAPOLIS (AP) — Slap the floor, bend those knees and get both hands up.

This national championship game is going to be a clinic on defense.

Virginia and Texas Tech are the last two teams alive in the NCAA Tournament, and they're here because they barely let their opponents breathe with the ball.

Two of the three best defenses in the nation will meet for the title on Monday night, the first appearance in the final for each program. So after surviving a low-scoring semifinal on Saturday, here come the Cavaliers and the Red Raiders for another clash of the paint packers and ball hawkers.

"I have a lot of respect for Virginia," Beard said. "I watch them on TV all the time, and we study the things they do defensively."

The Red Raiders are now Ph.D. level defenders, too.

No matter the number of shots made, the trophy will be lifted and the confetti will be dropped either way at U.S. Bank Stadium, where 72,711 fans packed the 3-year-old football facility for the semifinal games. The last time the national title was awarded in Minneapolis was in 2001, when Duke beat Arizona at the Metrodome.

"Hopefully we won't have to have a close game like that on Monday, but if we do, we have experienced it and I feel like we're going to be ready," Virginia's De'Andre Hunter said.

The last big-time sporting event held in this building was the Super Bowl just 14 months ago when the Philadelphia Eagles beat the New England Patriots 41-33 in the second-highest-scoring NFL title game in league history.

The chance of Virginia and Texas Tech establishing a similar feat will be slim at best, considering the record for combined points in an NCAA championship game is 182, when Kentucky beat Duke 94-88 in 1978. The Cavaliers (55.4) and Red Raiders (59.0) entered the Final Four ranked first and third, respectively, in the country in average points allowed per game.

To no surprise, gamblers seized on the under.

The projected scoring total for this NCAA final opened at 121 and bettors quickly drove it down to 117½ within an hour. Virginia opened as a 2-point favorite, and early action tightened the spread to 1 over Texas Tech.

"We just want to continue to be the underdog," Red Raiders backup guard Brandone Francis said.

Virginia has been a fixture in the top 10 of basketball data expert Ken Pomeroy's defensive efficiency rankings since the team's breakout 2014 season under coach Tony Bennett. The Cavaliers entered the weekend fifth nationally with 88.7 points per 100 possessions, a metric factoring out their slower offensive pace and offering a sharper measure of performance than scoring averages depressed by low-possession games.

Texas Tech has made a rapid rise in three seasons under Beard, entering the Final Four with the best defensive efficiency rating (84.0) ever recorded in the KenPom ratings that date back to the 2002 season.

Virginia, the No. 1 seed from the South Region, gives the Atlantic Coast Conference a representative in the championship game for the fourth time in five years.

Even with this six-year run as one of the best teams in the country, the Cavaliers don't have that Duke-North Carolina cachet. They're best remembered for losing to UMBC last season, the only No. 1 seed to ever be beaten by a No. 16 seed. They're also the program guilty of one of the biggest regular season upsets in history, when the Cavs lost to tiny Chaminade in 1982 as the No. 1 team in the Associated Press poll with all-time great Ralph Sampson in the paint.

Bennett beamed next to guards Kyle Guy and Ty Jerome at the podium afterward, recalling the pain of one year ago.

"Now to sit with them here brings great joy to my heart, it really does, because it's good. That's all I can say, and I'm so thankful," Bennett said.

Texas Tech, the No. 3 seed in the West Region, has even less of a hoops history.

"Why not us? We've got good players. We've got a great university. We play in arguably the best league in the country," Beard said, making the argument that, of course, coaches from three or four other conferences would. "We won the Big 12 regular season title. We're a good team."