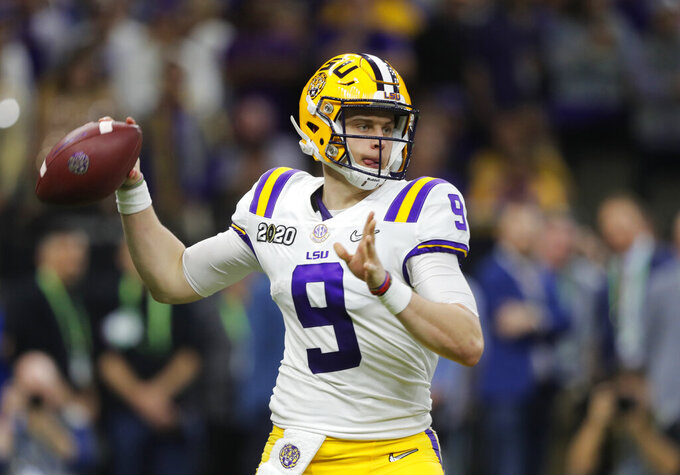 FILE - In this Jan. 13, 2020, file photo, LSU quarterback Joe Burrow throws a pass against Clemson during the second half of the NCAA College Football Playoff national championship game in New Orleans. No. 1 overall pick Burrow and the rest of the rookie class will begin preparing for their first seasons in the NFL at home instead of at minicamps and team facilities this month. (AP Photo/Gerald Herbert, File)

Joe Burrow should be getting ready to report to rookie minicamp this month, then joining the veterans on the Cincinnati Bengals for the rest of the offseason program.

But like everyone else around the NFL, Burrow is left on his own to prepare for the season with facilities shut down because of the COVID-19 pandemic, and unlikely to open until training camp at the earliest.

“You have to find a way to get in your backyard and get reps in,” Bengals coach Zac Taylor said. “Whether it’s telling your girlfriend or mom where to line up, or how many steps to take on each route -- just make sure you know it inside and outside. We’re going to challenge our guys to get creative.”

The best comparison to what the NFL is going through this offseason with no practices, in-person meetings or the usual bonding that happens each spring came back in 2011 when team owners locked out the players until July.

That led to no trades or free agency signings all offseason, then a rushed process to get ready for training camp that summer, with players finding new teams and learning new systems on the fly.

But it wasn’t detrimental to the No. 1 pick that year, the only player before Burrow to win the Heisman Trophy, a national championship and be drafted first overall. Cam Newton won the starting job in Carolina and threw for more than 400 yards in each of his first starts on the way to winning Offensive Rookie of the Year honors.

He wasn’t alone making an early impact. Andy Dalton went from a second-round pick in Cincinnati to a Week 1 starter and led the Bengals to the playoffs. Other rookies such as Von Miller, J.J. Watt, Julio Jones, A.J. Green, Patrick Peterson and Aldon Smith made major impacts.

In all, more rookies started Week 1 that season than in any previous year since the merger. The 47 Week 1 starts for rookies only was surpassed in 2012 and in 2019.

That success story from 2011 didn’t stop executives from taking the lack of a traditional offseason into account in their draft strategy. Raiders general manager Mike Mayock said he wanted to concentrate most of his choices in the earlier rounds where he believed the players were more finished products and would have an easier time getting up to speed.

The Raiders made all seven of their picks in the first four rounds.

“We think there’s a pretty good chance we’re not going to see our rookies in person until maybe training camp,” Mayock said. “If that’s the case, you better make sure your rookies are smart, hardworking and accountable because they’re going to have a shortened period of time to make the team.”

The decisions teams made went beyond draft strategy or trading picks for veterans. It even played a role in free agency and trades. The Bills opted to trade for a proven veteran, Stefon Diggs, rather than draft a rookie in a receiver-rich draft.

With several veteran quarterbacks available on the market to challenge Mitchell Trubisky in Chicago, the Bears opted to deal for Nick Foles in part because he worked previously under head coach Matt Nagy, offensive coordinator Bill Lazor and quarterbacks coach John DeFelippo. Foles would have a more advanced understanding of the offense.

That also played a role in Carolina. New Panthers coach Matt Rhule brought in Teddy Bridgewater as a free agent instead of sticking with Newton in part because Bridgewater and coordinator Joe Brady spent time together in New Orleans.

“In a year like this especially, where we are all in our homes, I think Teddy is a guy who has been in this offense, knows this offense and had great familiarity with Joe,” Rhule said. “It just made sense to us.”

This situation has some key differences from 2011, when coaches were prohibited from communicating with their players. But the players had no limitations on how they would work out. Groups of players on some teams even held their own offseason practices to build chemistry.

Patriots coach Bill Belichick said he plans to use the next few weeks to teach as much as possible so that players will be mentally ready whenever training camp starts.

The Patriots had the advantage in 2011 of having a veteran team with a quarterback, Tom Brady, who had spent more than a decade under Belichick. That won’t be the case this year with Jared Stidham in line to take over after throwing only four passes as a rookie last season.

Ron Rivera also got his start that year in Carolina with Newton and helped the Panthers improve from two wins to six. Now Rivera again finds himself taking over a new team in Washington with a truncated offseason program.

“I’m not overly concerned about it because I’ve gone through it,” Rivera said. “I just think the most important thing is to be prepared and be ready and jump on it when you get the opportunity.”