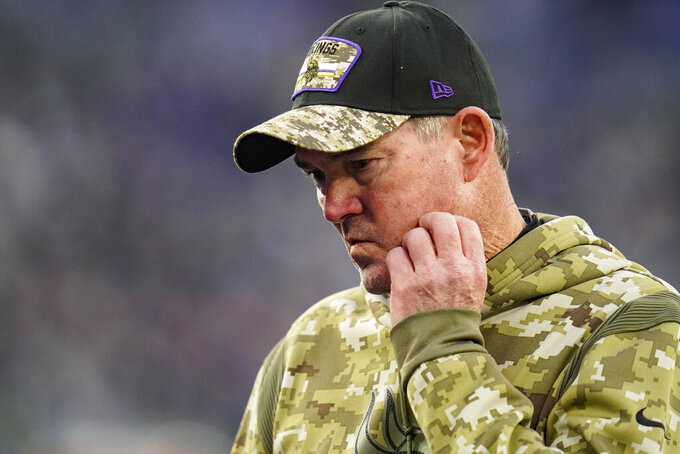 EAGAN, Minn. (AP) — The Minnesota Vikings have been operating this week under the NFL's intensive virus protocols, as five players remained on the COVID-19 reserve list Wednesday and one had to be hospitalized with a breathing trouble.

Coach Mike Zimmer declined to identify the player, whom he said was admitted to the emergency room Tuesday with pneumonia-like symptoms before his condition improved.

“He’s stable now,” Zimmer said Wednesday, "but it was scary.”

According to a person with knowledge of the situation, speaking on condition of anonymity to The Associated Press because the person was not authorized to speak publicly about it, backup guard Dakota Dozier was the player who had to be hospitalized.

Dozier is vaccinated for COVID-19.

“It’s serious stuff,” Zimmer said. "Like 29 guys are getting tested because of close contact, including myself. Just do what we do.”

Smith, Bradbury and Dozier had to sit out the game at Baltimore, which the Vikings lost 34-31 in overtime. Smith, who said this summer he had not been vaccinated, has also been ruled out of the game Sunday against the Los Angeles Chargers. NFL protocols for unvaccinated players who test positive require a minimum 10-day isolation.

On the injury front, defensive tackle Michael Pierce, who has missed four straight games with an elbow injury, did not practice Wednesday, which was just a walk-through for the Vikings.

Cornerback Patrick Peterson, who is on injured reserve with a hamstring injury, can return as early as next week for the game against Green Bay. Zimmer said he's anticipating Peterson being cleared to play against the Packers.

“But we said that about Michael Pierce and ... other guys,” Zimmer said. "You just have to wait and see where we’re at, until we see him run full speed and cover guys.”