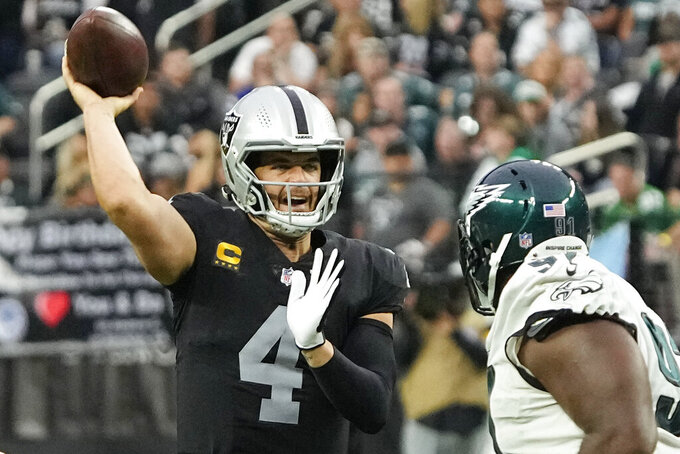 Since stepping in as starting quarterback in Week 1 of his rookie season with the Raiders, Derek Carr has been one of the most prominent faces of the franchise.

But in the early years as he found his voice, Carr could defer to veterans such as Charles Woodson, Donald Penn and Justin Tuck. Then Jon Gruden took over as the marquee name when he arrived for his second stint as coach in 2018.

Now with Gruden gone and Carr entrenched as one of the most experienced starters on the roster, the Raiders have truly become his team.

“When Coach Gruden would walk a room, all eyes are on him,” Carr said. “When we lost that, someone has to fill that void. It’s not only me, but obviously as the quarterback and leader and I’ve been here a while, I was like, I've got to take that part of what I do to another level. ... Now I’m just trying to do everything I can to encourage, uplift and motivate the guys to keep going in every situation.”

Carr and the Raiders (5-2) have negotiated a tricky situation when Gruden abruptly resigned following the release of old emails that had racist, homophobic and misogynistic comments.

Instead of sending the Raiders spiraling like has happened so often during an 18-year run with just one winning season, the team bounced back from consecutive double-digit losses in Gruden's final to games with double-digit wins in the first two under interim coach Rich Bisaccia.

That sent the Raiders into their bye week in sole possession of first place in the AFC West for the first time since heading into the final week of the 2016 season.

“We went through a lot of adversity going through that. It’s a big shock,” left tackle Kolton Miller said. “It starts with coaches first, they double down. We were running with them and we’re all behind Rich Bisaccia. We’ve got a great team and we know that. We've just got to keep making big strides and the trust and faith that we’re rolling with right now is awesome.”

An improved defense and a more aggressive Carr are a big reason for the success so far in 2021. Third-year defensive end Maxx Crosby has emerged as a star and has teamed with free-agent acquisition Yannick Ngakoue to form one of the best pass-rushing duos in the league this season.

That has helped a defense that allowed the most points and second-most yards per play in Gruden's first three seasons take a big step under new coordinator Gus Bradley.

Carr has also been much more willing to push the ball down the field this season, with his average throw traveling a career-high 9 yards downfield, according to Sportradar, and his deep completions per game more than doubling from 1.4 to 3.

That has helped Carr rank second in the league to Tom Brady with 324.1 yards passing per game.

“Football-wise on the field he is tremendous,” Bisaccia said. “He has an incredible understanding of what we are trying to do on offense. We can all see that the relationship that he and Greg Olson have running this offense.”

Bisaccia has also called Carr the “voice of the Raiders.”

But the real test will come after the bye when the Raiders try to avoid a repeat of the late-season collapses that doomed them in 2019 and '20 under Gruden and get back to the playoffs for the first time since 2016.

“We talked about it when everything happened, ‘Guys, we’re going to be 5-2 at the bye. Be 5-2 at the bye, let’s get healthy, and let’s go on a run,'” Carr said. "We did the first part right. We've got to get healthy this week, it’s not just a week off where we just lay on the couch. Guys have to work to get healthy, guys have to work to get better. If we do that and take care of business that way, we should be able to go on a run, take care of business when it comes.”