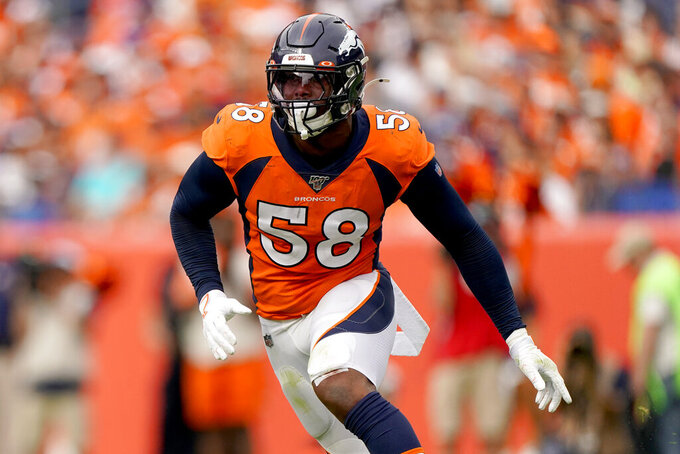 FILE - In this Sept. 15, 2019, file photo, Denver Broncos outside linebacker Von Miller (58) chases a play against the Chicago Bears during the second half of an NFL football game in Denver. Miller's body is buffer, his hair tinted orange on top. The star linebacker says his dramatic offseason transfiguration was a result of his battle with the coronavirus, Kobe Bryant's untimely death and the Michael Jordan documentary. (AP Photo/Jack Dempsey, File)

The Broncos star linebacker on Tuesday revealed four factors that led to his dramatic offseason transformation: his substandard 2019 season, his battle with COVID-19, Kobe Bryant’s death and Michael Jordan’s documentary.

These seemingly disparate factors led Miller to reflect on his leadership and his legacy and ultimately helped him reshape his psyche and physique heading into his 10th NFL season.

“It's never too late to change,” said Miller, 31, who kick-started his offseason training program in San Francisco less than a week after the Broncos' season ended.

Despite failing to reach double digit sacks for the first time in a full season, Miller earned his eighth trip to the Pro Bowl.

Hours before kickoff in Orlando came word that Bryant had perished in a helicopter crash in Los Angeles.

“We were in the locker room and we were talking about it and that kind of started it for me,” said Miller, who went out and bought Bryant's book, “The Mamba Mentality.”

He was particularly inspired by Pau Gasol's foreword and the praise Phil Jackson heaped on the Lakers icon.

Which began with Miller demanding more of himself.

He returned to California to train but retreated to Denver when the coronavirus pandemic hit, scuttling his plans for a busy offseason.

Miller, who moonlights as a fledgling deejay, had grandiose plans for his alter-ego, “D.J. Sauce the Von,” that included club concerts at events such as the Kentucky Derby.

With those plans erased, Miller decided to use his time training harder than ever, “and I just kind of got lost in that.”

He pumped iron at his home gym by day and scratched vinyl by night. Despite wearing a mask in public and socially distancing, Miller contracted COVID-19 in April.

The virus robbed him of his appetite and led to a 15-pound weight loss. It would be a month before he had his wind back so he could start to rebuild his strength and stamina.

During his recovery, Miller watched Jordan’s “The Last Dance” documentary, which triggered another round of self-reflection.

Reading about Bryant, Miller realized he had room to grow despite a resume featuring 112½ sacks, seven All-Pro honors and a Super Bowl MVP trophy.

So, Miller hit the gym even harder.

“I didn’t take any time off, I didn’t take any vacations, I didn’t do anything but work out and grind and reinvest all the time that I would usually spend on like endorsements and all this other stuff,” Miller said. “I just reinvested that time in myself.”

Miller, who suffers from asthma, said he considered opting out of the 2020 season but he concluded any possibility of reinfection with the virus was mitigated by the league’s coronavirus protocols.

Besides, he needed to see through this transformation into a different kind of locker room leader, one that's more star student than class cut-up.

“I tell guys that I love them more," Miller said. “I don’t have a problem with saying, ‘Hey, I love you. I appreciate you.’ Because you never really know and during the times that are going on right now, I feel like it’s mandatory for me to tell guys I love them.”

Miller also decided to spend more time with his general manager when he could.

“Kobe was a legend and I feel like we’ve got a legend here with John Elway," Miller said. "I felt like in years before I kind of shied away because it’s Elway legend and he walks in the room and you’re kind of like, ‘Let me get out of here.'

Even when he was leading the Broncos to their Super Bowl 50 triumph, Miller sat in the co-pilot’s seat beside DeMarcus Ware.

“I kind of shied away from that pressure,” Miller said. “I was like I’m going to lead in my own way and ... I want to be a fun leader.”

Now, he’s embracing that pressure as a privilege, saying, “I’ve got to still lead by example. But at the same time, I’ve got to cut down a little bit on Sauce Von the Don and I’ve got to become more of a leader like Kobe and Jordan were.”