In wake of turnaround, Dolphins believe 2020 will be special 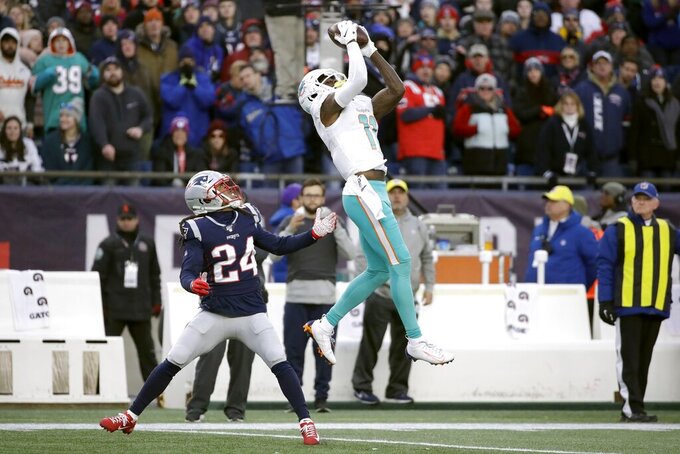 It has been that kind of year for the Dolphins: weird.

A gutting of the roster under rookie coach Brian Flores extended beyond training camp, when Miami traded away two players who went on to the Pro Bowl: Minkah Fitzpatrick and Laremy Tunsil. The Dolphins were outscored 102-10 in their first two games, and lost their first seven. They were out of the playoff race but contenders for Worst Team Ever.

And then .... the roster churn continued. The Dolphins used 84 players, an NFL record. But they won five of their final nine games, and capped the turnaround Sunday when they ended a streak of 10 consecutive losses at New England with a 27-24 upset that cost the Patriots a first-round bye in the playoffs.

Now, armed with three first-round draft picks and $100 million in salary cap space, the Dolphins appear poised to make a leap forward — and perhaps even win a playoff game for the first time in 20 years.

Owner Stephen Ross ordered a rebuild in January, and the subsequent roster dismantling by general manager Chris Grier brought accusations that the Dolphins were tanking in pursuit of the No. 1 draft pick.

Flores made it clear he was out to win, however. He salvaged a season that in late October appeared headed for 0-16, and showed the Dolphins may have finally found a keeper as coach.

“He’s a great mind, and he’s a great dude,” cornerback Nate Brooks said. “He has this program going in a great direction.”

One measure of progress under Flores, a longtime Patriots assistant: In Week 2, they lost at home to New England, 43-0. In Week 17, they won at Foxborough for the first time since 2008.

“The first time, it was a joke,” defensive tackle Christian Wilkins said. “They just manhandled us and destroyed us. We’ve come a long way, clearly.”

If Ryan Fitzpatrick decides to retire, he went out with a flourish, throwing for 320 yards Sunday, including the winning touchdown pass to Gesicki with 24 seconds left.

Fitzpatrick, 37, has said he's undecided about whether to return for a 16th NFL season.

“I will start the ‘One more year’ chant right now if you want,” Gesicki said. “I love playing with him.”

Fitzpatrick is under contract for another season but might have to accept a backup role if the Dolphins draft a potential franchise quarterback.

One star emerged this year: DeVante Parker. The injury-plagued fifth-year pro played in all 16 games for the first time, and he totaled 1,202 yards receiving and nine touchdown catches to rank fifth in the NFL in both categories.

It's remarkable the Dolphins ever played with any cohesion, because they made more than 225 transactions in 2019, almost double the league average. Players often started the same week they were signed as injuries took a toll on a team with little depth. Seven Week 1 starters missed seven games or more.

“People can say whatever they want about not making the playoffs and our record,” Fitzpatrick said. “But to me this was such a successful, great season in the fact that we had so much adversity and overcame it and stuck together.”

Half the roster or more is likely to be replaced this offseason, which puts the onus on Grier to make personnel decisions that accelerate progress made by Flores.

Ross has said the priority is to acquire a franchise QB, and with three first-round picks, including the No. 5 overall choice, the Dolphins will have the wherewithal to do it in the draft. They haven't used a first-round choice on a quarterback since 2012, when they took Ryan Tannehill.

The Dolphins have 14 draft picks in 2020, and at QB and elsewhere, they must start selecting stars. Since 2015, Miami draft picks have a total of one Pro Bowl appearance for the Dolphins.