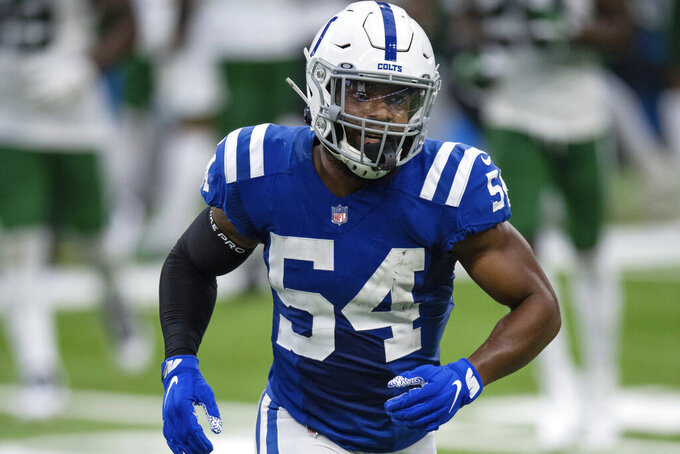 CLEVELAND (AP) — Anthony Walker walked on to Northwestern's campus for his only college visit and knew it was where he belonged.

He felt the same last week when he met with the Browns.

“I thought it was the perfect fit, honestly,” the middle linebacker said Monday. "I was locked in already.”

After four seasons with Indianapolis, Walker signed a one-year free-agent contract with the Browns, a team he knew belonged in the playoffs when he faced them last season and one he now believes has a legitimate chance to win the Super Bowl.

“We play this game to win the biggest trophy in it and that is winning the Super Bowl,” he said. “That is my No. 1 goal. It will always be my No. 1 goal. The next part of that would be to help us become the No. 1 defense in the NFL and whatever that takes.

"Whatever happens after that, it is all gravy. I want to win and that is why Cleveland is the place I chose.”

The 25-year-old Walker was introduced by the Browns on a Zoom call, and it didn't take long to see what they see in him. He was a leader with the Colts, and Walker hopes he can earn the same trust with his new teammates in Cleveland.

Walker said the other signings influenced his decision to join the Browns.

“When you see a team trending in the right direction, you want to be a part of that,” he said. "Seeing them play last year, seeing the pieces they are adding this year, you know they are building something special.”

Walker was a mainstay on one of the NFL's top defenses with the Colts, who played the Browns in Week 5 last season. Cleveland beat Indianapolis 32-24, and the loss had an impact on Walker.

These weren't the same old Browns.

“I knew they were a playoff team,” he said. "I talked to coach (Kevin) Stefanski and I told him, ‘When we played you guys last year, I told the guys in our locker room that is a great football team over there.’ When you can stop the run and run the football, you are going to put yourselves in position to be successful in the NFL.

“The ability to make big plays and limit big plays, I thought they played good complementary football, offense and defense.”

No player made a bigger impression on Walker than Browns quarterback Baker Mayfield. He passed for 247 yards and threw two touchdown passes against the Colts. Walker had studied film on Mayfield and he saw many of the same things in person.

"Honestly, for me, I know he can make every throw,’′ Walker said. “Out of the pocket, in the pocket, we had to make sure we got to him as much as we could with our front four, because obviously the talent at receiver and tight end is really crazy when you talk about the Cleveland Browns.’’

Berry's offseason moves have helped strengthen a defense that trailed behind a Cleveland offense with plenty of playmakers in Mayfield, Pro Bowl running back Nick Chubb and wide receivers Jarvis Landry and Odell Beckham Jr.

Walker said after he signed with the Browns one of his friends joked that he's joining an offensive juggernaut.

“One of my close friends texted me and was like, ‘You are going to play for the (Golden State) Warriors on offense,'” Walker said.

When he finalized his deal with the Browns, Walker also got a text from Mayfield, whom he called an "elite quarterback. Mayfield reached out to several of his new teammates last week and Walker said he appreciated the gesture.

“It’s always nice to get that welcome,” he said.

Walker was beloved by his Colts teammates. After his signing with Cleveland became official, several of them, including All-Pro linebacker Darius Leonard, expressed their gratitude toward him and told the Browns they are getting a special person and player.

“Leaving Indy is not an easy thing to do,” he said.

Cleveland represents a new start, and chance to do something special.

“You talk about a team that is a fourth-and-1 away from beating the Kansas City Chiefs and going on to the next round,” Walker said. "A team that you could say is a couple pieces away or maybe a play or two away from being in talks of playing in the Super Bowl last year.

“You join a team like that with the culture they are building, the team, the camaraderie, all of that stuff. I am a small part of joining a great organization and an organization that is turning in the right direction.”