Ward, Teller practice as Browns get healthier from bye 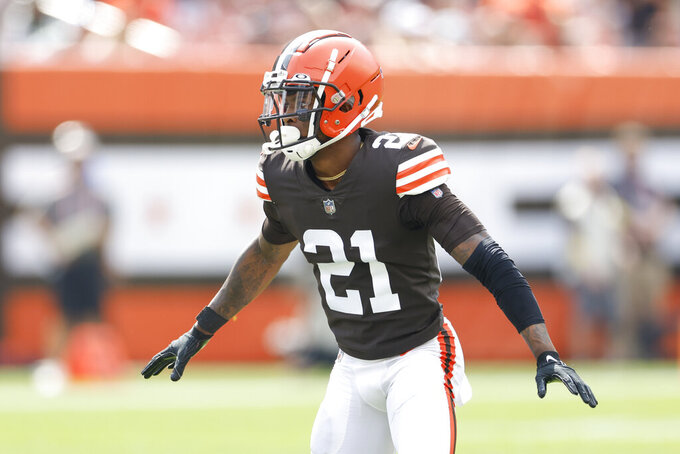 BEREA, Ohio (AP) — The Browns came back from their bye healthier than they've been in weeks.

Ward has been in concussion protocol since sustaining a head injury in the fourth quarter on Oct. 9 against the Los Angeles Chargers. The 25-year-old has had at least three known concussions in his five-year NFL career.

A first-time Pro Bowl selection, Teller missed the past two games with a calf injury.

Stefanski said both Ward and Teller were “trending appropriately.”

The Browns (3-5) visit Miami on Sunday, and Cleveland could use both back but particularly Ward against the Dolphins (6-3) and their speedy receivers, including Tyreek Hill.

The time off also gave defensive ends Myles Garrett (shoulder/biceps) and Jadeveon Clowney (ankle) a chance to further recover from nagging injuries. Garrett's medical issues were sustained when he flipped his car while speeding on Sept. 26.

Garrett and Clowney worked to the side along with tight end David Njoku (ankle) and right tackle Jack Conklin (knee) during the portion of practice open to reporters.

Njoku got hurt on Oct. 23 against Baltimore and sat out the Browns' 32-13 win over Cincinnati before the bye.

Stefanski said the timing of the bye helped players recover while getting focused on the next nine games.

"There were a lot of guys here working and a lot of guys getting better from a rehab standpoint. It's always a good time where the guys can get a little bit of a recharge.”

NOTES: DE Chase Winovich (hamstring) and rookie RB Jerome Ford (ankle) were designated to return from injured reserve. They're in a 21-day window to be activated to the 53-man roster. Winovich was acquired from New England in an offseason trade.