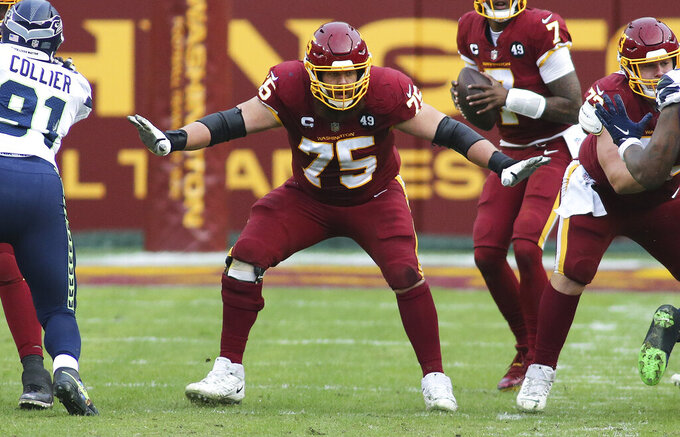 “That's not the last game I ever play with you,” he said.

Moses' prediction is a big step closer to coming true now that Washington has placed the franchise tag on Scherff for a second year in a row. The team announced the move Monday night on the eve of the tagging deadline after the two sides couldn't come to terms on a long-term contract.

Scherff is coming off the first All-Pro season of his NFL career. The 29-year-old started 13 games at right guard and helping Washington make the playoffs for the first time since 2015, Scherff’s rookie year after being drafted fifth overall.

Franchise-tagging Scherff again comes at a price of $18 million, a 20% raise from his 2020 salary. Scherff has started 78 games in his NFL career while developing a reputation for battling through injuries.

“I love it here,” Scherff said on locker cleanout day. “I’m just looking forward to the offseason and hopefully I can sign my name to stay here.”

Keeping Scherff is a major step toward continuity on the offensive line after re-signing center Chase Roullier to a four-year extension in January. Coach Ron Rivera said last month Scherff's status was among the topics being discussed with new general manager Martin Mayhew and executive vice president of football and player personnel Marty Hurney.

But there was little chance Washington would let Scherff walk. A year ago, the team moved on from Trent Williams and is still searching for his long-term replacement at left tackle.