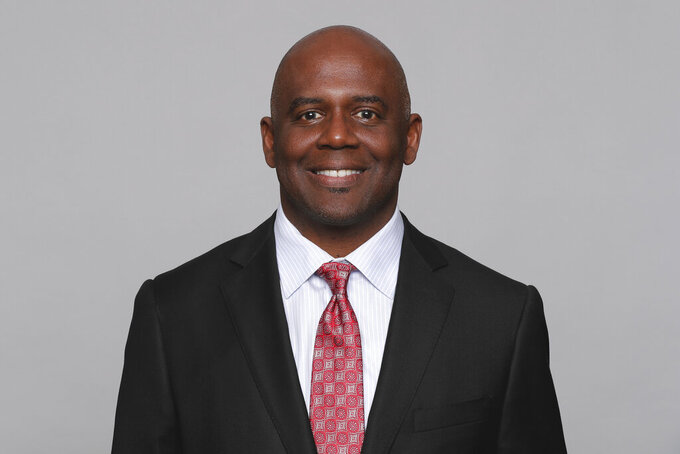 FILE - This is a May 14, 2019, file photo showing Martin Mayhew of the San Francisco 49ers NFL football team. Washington has hired Martin Mayhew to be its new general manager. The hiring of Mayhew makes Washington the only team in the NFL with a Black team president and GM. (AP Photo/File)

Ron Rivera bulked up his front office Friday, hiring Martin Mayhew to be Washington's general manager and Marty Hurney to serve as executive vice president of football and player personnel.

The moves give Rivera two seasoned NFL executives to work with going into his second season coaching and running football operations.

Mayhew joins Washington after four seasons with the San Francisco 49ers. Before that, he spent a year with the New York Giants and was GM of the Detroit Lions for seven-plus seasons.

He and Hurney will report directly to Rivera as part of the organization’s coach-centric front-office structure under owner Dan Snyder. Hurney was widely reported to be the pick as GM this week before Mayhew became the choice.

"I look forward to collaborating with both Marty and Martin in the years to come," Rivera said.

Mayhew drafted quarterback Matthew Stafford first overall in 2009 while in Detroit, a connection that is sure to raise eyebrows given the Lions' regime change and Washington's question mark at the position.

As a player, Mayhew was a cornerback on Washington’s most recent Super Bowl-winning team in the 1991 season. Rivera called the 55-year-old “a man of high character and integrity (who) was part of the rich history and tradition of this great franchise.”

“Martin is a proven general manager who will bring a wealth of knowledge and experience to the organization," Rivera said. "He will be an integral part of running the daily football operations and will allow me the opportunity to focus more on coaching.”

The hiring of Mayhew makes Washington the only team in the NFL with a Black team president and GM. Jason Wright joined the team as president last summer.

Rivera has championed diversity in football throughout his career. The 57-year-old of Mexican and Puerto Rican descent was the first minority to be named full-time head coach in franchise history when he was hired in January 2020.

After playing eight seasons, Mayhew began his path to NFL executive with Washington as a personnel intern in 1999 while attending law school at Georgetown University.

Mayhew was most recently vice president of player personnel for the 49ers, helping first-year GM John Lynch in 2019 with the team that went to the Super Bowl.

“Martin has played an integral role in helping to establish a sustainable, championship culture over the last four years," Lynch said. “His skills as a talent evaluator and his counsel as a trusted advisor have positively impacted me and the 49ers organization. Personally, Martin has always been a loyal teammate and a tremendous friend to me and my family. We are excited for him to take on this new opportunity.”

It's a new opportunity with a familiar face for Hurney reuniting with Rivera, whom he hired in Carolina for his first NFL head coaching job in 2011. Panthers owner David Tepper said upon firing Hurney in December from his second stint as GM with them, “Some of the timing in this decision was out of that respect for Marty to make sure he has the opportunity to look at other places.”

Hurney grew up in Maryland just outside D.C., went to Catholic University and was a sports writer at the Washington Star and Washington Times before transitioning into football. He joined Washington in public relations in 1988 and became assistant GM of the Chargers two years later.

“Marty Hurney is an excellent evaluator of talent and someone whom I trust and have worked with in the past,” Rivera said. “He knows the amount of hard work it takes to operate a successful personnel department. Marty has a proven track record as a successful scout and general manager and will be a vital part of shaping our roster."