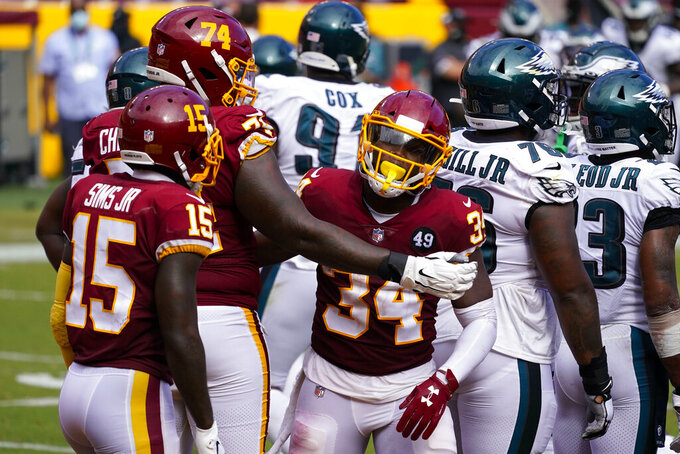 Washington Football Team running back Peyton Barber (34) celebrates his touchdown against the Philadelphia Eagles with teammates Steven Sims Jr. (15) and Geron Christian (74), during the second half of an NFL football game, Sunday, Sept. 13, 2020, in Landover, Md. (AP Photo/Alex Brandon)

ASHBURN, Va. (AP) — Washington is looking to make the most of its all-new backfield. Coach Ron Rivera and his staff can choose from a variety of options depending on the situation.

The new backfield is made up of rookie Antonio Gibson and offseason signings Peyton Barber and J.D. McKissic — not household names, but players who shoulder high hopes and expectations from Rivera.

It's a much different group than last year's rushing leaders for Washington. Derrius Guice, a second-round pick in 2018, was cut after he was charged with assault and felony strangulation. Adrian Peterson, the 2012 NFL MVP with Minnesota, was released prior to the season in what was seen as a surprise move. Chris Thompson left during free agency.

A “running back by committee” strategy is nothing new in the NFL, but it’s a far cry from the security Washington had at that position the last two years, when Peterson tallied 1,042 and 898 yards, respectively.

“Each week, each defense presents a different set of challenges,” new offensive coordinator Scott Turner said. “There are going to be certain things that we like to do against certain teams that we won’t against others. So, their roles might be slightly different each week.”

Washington ran for 117 yards on 23 carries during Washington's Week 2 loss at Arizona — an average of 5.1 yards per carry and an increase from just 80 yards the previous week.

Gibson has been the most intriguing player of the group. A 6-foot-2 third-round pick from Memphis, he played most of his college snaps at wide receiver. Being a full-time back is so new to him that he’s had to remind himself to run with a lower pad level than he did as a receiver.

After just nine touches and 18 offensive snaps in his NFL debut, Gibson jumped to 43 offensive snaps and 55 yards rushing in Week 2. He scored his first career touchdown in the fourth quarter, an 11-yard bruiser off an inside cut.

“Antonio, I think he’s one game more comfortable,” Turner said. “You can see him be more decisive with his cuts. He made a guy miss and he got upfield, whereas in the first game he made a guy miss and then looked for the next guy to make him miss instead of just picking up that 3, 4 yards.”

McKissic, a journeyman playing on his fourth team in five years, may have carved out a role as a change-of-pace runner. He also saw improvement in Week 2, averaging 6.6 yards per touch on eight carries, one game after finishing with negative yardage.

Barber came to Washington in free agency after four solid seasons with Tampa Bay. A power back, he took the bulk of the carries in Week 1 and scored two goal-line touchdowns, then abruptly saw his snaps cut to just one against Arizona.

That philosophy also suits Gibson just fine; he thinks the unit can become a handful for opponents as each player makes progress.

“I don’t know what other people say but I feel like our combination of our skillsets can be a problem,” Gibson said. “In certain games, like the first game, Peyton got most of the carries. I didn’t touch the ball that much in the second half. This game I touched the ball a lot and I feel like that’s just how things are gonna go, depending on the situation and what the team needs, we all step up and contribute.”

There’s also the lingering question of Bryce Love, the former Stanford star who tore his ACL at the end of his college career and missed all of 2019 to rehab. Back to full health, Love is taking good reps in practice, according to Turner and Jordan, but the staff hasn’t indicated when Love will make his NFL debut.

Gibson said he remembers the day at practice he noticed that Love looked like his old self — the dynamic back and 2017 Heisman runner-up.

“I feel like when he’s ready, or whenever they decide to let him go, I feel like he’s gonna help out a lot,” Gibson said.

That would mean one more potential threat for Washington to deploy in an unpredictable but productive rushing attack.