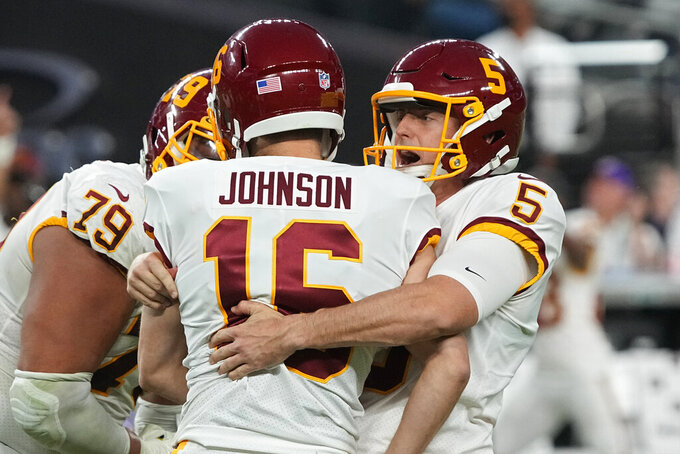 BETTING LINE: Cowboys by 4, according to FanDuel SportsBook.

TURNOVER DIFFERENTIAL: Cowboys plus-7; Washington minus-5

COWBOYS PLAYER TO WATCH: RB Ezekiel Elliott isn’t fully healthy and might not be the rest of the season because of his troublesome right knee. Coach Mike McCarthy hinted at resting the two-time rushing champ against the Saints, but Elliott played. It seems clear the Cowboys are hoping the 10-day break before this game will make a difference. Elliott has gone four consecutive games without reaching 50 yards, the longest stretch of his six-year career.

WASHINGTON PLAYER TO WATCH: CB Kendall Fuller will be responsible for minimizing Cowboys QB Dak Prescott's damage throwing the ball. With or without S Landon Collins, Fuller and CB William Jackson III need to continue playing the way they have during this four-game winning streak, or things could get ugly.

KEY MATCHUP: Washington QB Taylor Heinicke vs. Cowboys CB Trevon Diggs. As much as Dallas wants to get Elliott going along with Tony Pollard, and Washington would like to keep the ball on the ground as much as possible, Heinicke will likely face some important throwing downs against a dangerous Dallas secondary. After ending his interception drought at Las Vegas, Heinicke will try to avoid making a costly mistake the way he did during the three previous victories.

KEY INJURIES: Despite Elliott’s situation and Pollard's foot injury that likely will make him a game-time decision, the Cowboys will be healthier for this game than any since the opener. DE Randy Gregory (missed the past four games with a calf strain) and DT Neville Gallimore (out all season with a dislocated elbow) are expected to play. Barring a setback, the only missing projected starter is S Donovan Wilson (shoulder and chest injuries). WR Cedrick Wilson could miss another game with an ankle injury. ... Washington will be without TE Logan Thomas because of a left knee injury. RB J.D. McKissic (concussion), rookie LB Jamin Davis (concussion) and Collins (foot) remain question marks. Edge rusher Montez Sweat is out after testing positive for the coronavirus going on the NFL's COVID-19/reserve list.

STATS AND STUFF: In the six games before his calf strain, Prescott was fourth in the NFL with a 115.0 passer rating. In the past four weeks (he missed the victory at Minnesota), Prescott is 15th at 89.6. ... Pollard had the longest play for the Cowboys against the Saints, a 58-yard touchdown run. That came a week after his 100-yard kickoff return in a 36-33 overtime loss to Las Vegas. ... With 100 scrimmage yards, WR CeeDee Lamb can join Pro Football Hall of Famer Bob Hayes as the only Dallas receivers with eight games of at least 100 in their first two seasons. ... Dallas is tied with New England for the NFL lead with 19 interceptions after the club’s first four-pick game in almost 11 years against New Orleans. ... With a sack, LB Micah Parsons can become the first rookie to have one in six consecutive games since Jevon Kearse's 10-game run for Tennessee in 1999 on his way to the NFL rookie record of 14½. Parsons leads NFL rookies with 10 sacks, a club record for a first-year player. ... CB Trevon Diggs leads the NFL with nine interceptions and is the first with that many in his team’s first 12 games since Everson Walls had 10 in the first 12 Dallas games in 1981. Walls set the club season record with 11 that year. ... Washington has won four in a row since going into the bye week 2-6. ... The offense has converted a league-best 50% of third-down opportunities during its four-game winning streak. Washington was ranked 27th at 34.7% in its first eight games. ... Heinicke has completed 77.3% of his passes for 881 yards, seven touchdowns and two interceptions over the past four games. He was at 59.6% with three TDs and six INTs during the four-game skid going into the bye. ... RB Antonio Gibson has rushed 52 times for 199 yards over the past two games. He also has 12 catches for 58 yards receiving in that span. ... RB Wendell Smallwood could again spell Gibson if McKissic misses a second consecutive game. ... WR Terry McLaurin has 19 catches for 244 yards and two receiving TDs in three career games against the Cowboys. ... TEs Ricky Seals-Jones and John Bates are expected to get significant playing time with Thomas out. ... The Raiders' three points in the first half were the fewest by a Washington opponent at halftime since Week 7 last year when the Cowboys also scored three. ... DT Jonathan Allen leads the team with 6½ sacks. ... DE James Smith-Williams had four tackles and split a sack with Allen against Las Vegas. ... LB Cole Holcomb led Washington with 10 tackles and had a career-best two passes defensed in the Raiders game. ... K Brian Johnson connected on a 48-yard field goal with 37 seconds left last week. It's his first career go-ahead field goal in the final minute of a game.

FANTASY TIP: Washington WR DeAndre Carter could have a sneaky good day against one of the worst pass defenses in the NFL. Carter returns punts and has become Heinicke's No. 2 target after McLaurin when Thomas does not play.