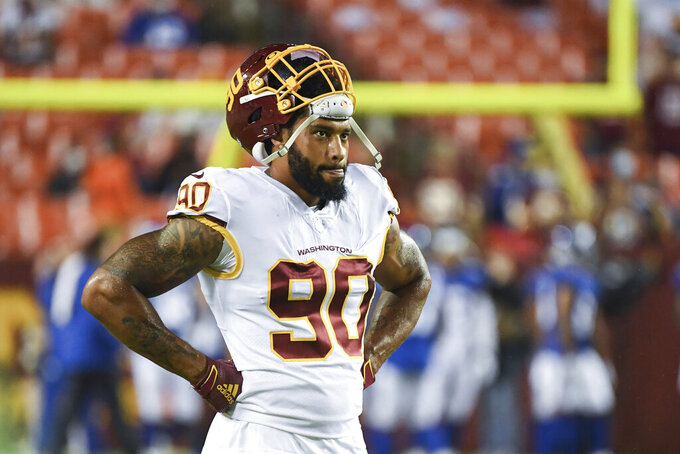 FILE - Washington Football Team player Montez Sweat (90) looks on during pre-game warm-ups before an NFL football game against the New York Giants, Thursday, Sept. 16, 2021, in Landover, Md. Washington has put pass rusher Montez Sweat on the NFL's COVID-19 reserve list. Sweat was expected to return to practice this week and play against the Dallas Cowboys on Sunday after missing the past four games with a broken jaw. Sweat was one of Washington's few unvaccinated players. (AP Photo/Terrance Williams, File)

He was expected to return to practice this week and play against the Dallas Cowboys on Sunday after missing the past four games with a broken jaw. Sweat was one of Washington’s few unvaccinated players and therefore is ruled out of the Cowboys game.

Sweat could return Dec. 19 at the Philadelphia Eagles if he remains asymptomatic. Coach Ron Rivera was optimistic that Sweat's absence would not be long.

“We'll be fine,” Rivera said. “We like our guys, and we'll be ready for Sunday.”

Despite missing the past month, Sweat ranked second on the team with four sacks this season. Washington's pass rush is already without reigning Defensive Rookie of the Year Chase Young, who tore the ACL in his right knee.

Rookie linebacker Jamin Davis joined running back J.D. McKissic in concussion protocol, and neither player practiced Wednesday. Rivera said Davis reported symptoms to the team since the game at the Las Vegas Raiders on Sunday.

Washington put tight end Logan Thomas on injured reserve with a left knee injury from a low hit by Raiders defensive end Yannick Ngakoue. An MRI did not confirm the worst fears of a torn ACL, but Thomas is back on IR after missing six games earlier this season with a hamstring injury and Rivera said the team is awaiting more tests.

The injuries continue to pile up for Washington, which put Khaleke Hudson on IR and signed fellow linebacker Milo Eifler off the Miami Dolphins practice squad Tuesday. Safety Landon Collins, who missed the Raiders game with a foot injury, did not practice Wednesday.