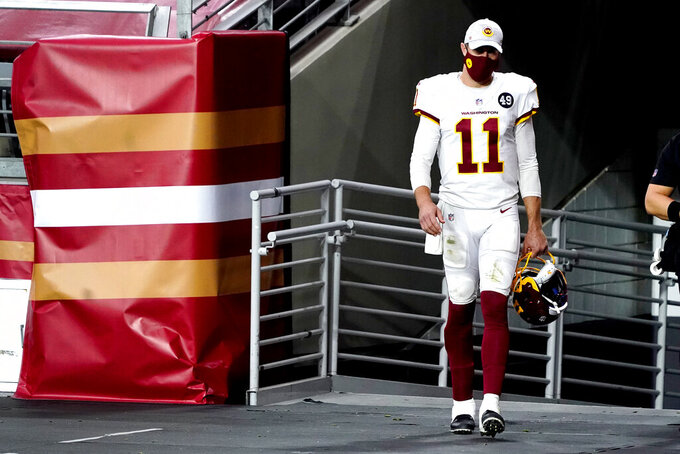 WASHINGTON (AP) — Alex Smith’s strained right calf prevented him from practicing with Washington on Wednesday, so Dwayne Haskins took snaps with the first-team offense, and coach Ron Rivera said he would be OK with waiting until just before the next game to know who will start at quarterback.

“You’d love to be able to practice and go and get all the reps and stuff,” Smith said during a video conference with reporters, “but I’ve played a lot of football.”

With snow and rain in the area, Washington went through drills at its indoor facility in Ashburn, Virginia, and the session was closed to the media. But the NFC East leader announced that Smith stood by while Haskins, the 15th overall choice in the 2019 draft, got the main work.

Asked whether he thought he can play Sunday when Washington (6-7) hosts the Seattle Seahawks (9-4), who are tied for first place in the NFC West, Smith replied: “It would be ridiculous for me to try to say right now, especially with the type of injury it is. There’s no reason at this point to even try to attempt that. There are several days right here to see how this goes. A lot can change day to day.”

Washington has won four games in a row, with Smith starting each one.

Haskins began the season as Washington’s QB, but he was benched after four games and three consecutive losses.

He initially was replaced by Kyle Allen, who then got injured, allowing Smith to take over and start for the first time in two years.

Smith gruesomely broke his right leg in two places during a game in November 2018, then needed 17 operations, some because of an infection.

The calf problem that affected him during Sunday’s 23-15 victory against the San Francisco 49ers is not related “at all” to that previous injury, according to Smith, who left that game just before halftime and Haskins took over.

“I’m going to do everything I can all week from a treatment and rest standpoint, mentally preparing to get ready. Certainly, there is a point obviously here as the week goes on where decisions have to be made,” Smith said. “For me, it’s just about being honest. Either you can or you can’t.”

Coach and QB agreed that sooner is better, naturally, to know who is going to be behind center against Seattle.

They also agreed that a quick decision is not necessary.

Rivera said it wouldn’t concern him if someone such as Smith — a 36-year-old who entered the NFL in 2005 — went a full week without practicing but played anyway.

“A smart football player like that — you usually don’t worry about those guys,” Rivera said. “Those guys will be ready to pick it up and be ready to go.”

And as for the timing of a QB choice?

“When you have a veteran guy that’s a smart football player and knows the game,” Rivera said, speaking generally, “sometimes you ride it all the way to the end.”

NOTES: Rivera eluded a question about who would be the backup QB if Haskins is the starter. ... Leading rusher Antonio Gibson, who missed the game against the Niners with turf toe, worked off to the side with trainers during practice. Rivera said Gibson is making “good progress; I’m pleased where things are headed right now.” ... P Tress Way was selected as NFC Special Teams Player of the Week for the second time this season.