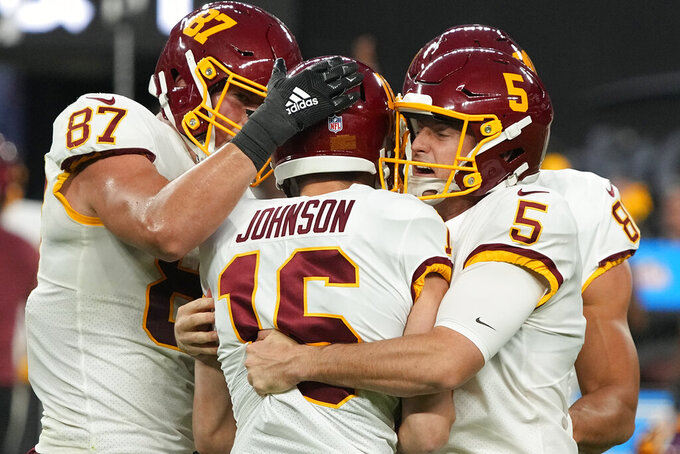 When the NFL schedule came out in May, Ron Rivera loved that Washington finished the season with five games against NFC East competition.

He told players it was an opportunity if they could still be in the playoff race by this stretch. A four-game winning streak has vaulted Washington to 6-6 and right in the thick of the chase for not only a spot but possibly a second consecutive division title.

“We’re at the part where we control it,” Rivera said Monday. “What’s going to happen to the Washington Football Team is now in our hands. We go out and play the way we’re capable of, we give ourselves a chance, and that’s where we wanted to be.”

Washington could be without top tight end Logan Thomas when the team hosts the Dallas Cowboys on Sunday, but Rivera said an MRI did not confirm the worst fears of a torn ACL.

But Washington has dealt with injuries to reigning Defensive Rookie of the Year Chase Young, fellow pass rusher Montez Sweat, linebacker Jon Bostic, safety Landon Collins and center Chase Roullier, so playing down another starter is nothing new.

“I think the coaches have done a really good job in preparation,” he said. “We’ve had good depth. We’ve had players that we’ve been able to plug in and have them play because they’ve been ready to play.”

Part of the success has been a winning formula predicated on running the ball and taking some pressure off quarterback Taylor Heinicke. Washington ran the ball 30 times in the win at the Las Vegas Raiders.

Grinding it out isn’t easy, though. Washington’s past three victories have come by a combined 10 points.

Asked if his team could win a game that’s not chaotic, Heinicke responded: “Trust me, we would like that as well. A win is a win.”

Despite winning four in a row, Washington opened as a 4½-point home underdog against the 8-4, division-leading Cowboys on FanDuel Sportsbook. Beating Dallas once, splitting against Philadelphia and taking care of business against the last-place New York Giants could be enough to get Washington at least an NFC wild-card spot.

The defense is finally living up to lofty preseason expectations after being one of the NFL’s best units in 2020, despite losing Young to a season-ending knee injury. Washington is allowing 17.5 points a game during this winning streak.

It’s nitpicking given how well things are going, but Rivera pointed to offensive penalties as something he’d like to see his team cut down. Washington was penalized six times for 47 yards at Las Vegas, and it was the timing of flags that hurt the most.

“We had a couple penalties that we didn’t overcome, and because of that the drive stalled,” Rivera said.

Kicker Brian Johnson connected from 48 yards for the go-ahead field goal with 37 seconds left against the Raiders. He’s the team’s fourth kicker this season, with the latest change necessitated by Joey Slye’s pulled hamstring, but Johnson has been on Washington’s radar since training camp and could be the one who sticks.

Curtis Samuel was targeted just once by Heinicke in the Raiders game, his second back after missing time with a lingering groin injury. The receiver who was supposed to be a big part of Washington’s offense has not been, and he’s unlikely to be more than a complementary player the rest of the way.

While losing Thomas for some time, Washington could get Sweat, who has been out a few weeks with a broken jaw, and safety Landon Collins, who missed the Las Vegas game with a foot injury, back to face Dallas. Rivera was optimistic about Sweat and Collins practicing this week.

17-15 — Washington beat Las Vegas and Seattle by the identical score, and keeping the points at a minimum is becoming Washington’s style.

“There may be a game where we’ve got to score more than 17 points. I get that,” Rivera said. “You’re in a game and it’s grind-it-out, rock ‘em sock ’em, why would we want to throw the ball 30, 40 times and expose the ball to something bad to happen? The formula is working.”

Rivera and defensive coordinator Jack Del Rio have been able to put together plans that beat Tom Brady, Cam Newton, Russell Wilson and Derek Carr. Now they have to figure out how to slow down Dak Prescott and the Cowboys, who can score in bunches.