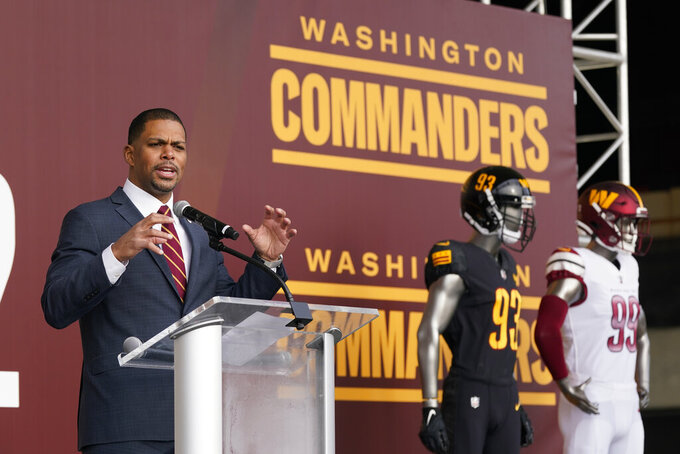 Washington has some new Commanders in town.

The NFL team announced its new name on Wednesday, 18 months after fresh pressure from sponsors helped persuade the once-storied franchise to drop its old moniker following decades of criticism that it was offensive to Native Americans. The organization committed to avoiding Native American imagery in its rebrand after being called the Washington Football Team the past two seasons.

Washington is the latest American major professional team to abandon its name linked to Native Americans, and it was considered one of the most egregious.

Suzan Shown Harjo, who is Cheyenne and Hodulgee Muscogee, called the change “an amazing and a giant step in the maturation of America.” The 76-year-old Harjo has been advocating for sports teams to drop Native imagery and mascots since the 1960s.

While Major League Baseball’s Cleveland Guardians have changed their name, the NFL’s Kansas City Chiefs, NHL’s Chicago Blackhawks and baseball’s Atlanta Braves have said they are not planning to make a change.

“Native mascots are inaccurate and stereotypical depictions of Native culture,” the Pawnee woman said in a statement. "They do not honor or celebrate Native peoples but are rather a tool of white supremacy created to dehumanize and objectify us. Research has shown time after time that Native mascots lead to lowered self-esteem and self-worth, and increases rates of depression, self-harm, and violence against Native youth.

“The Washington Commanders are proof that ending the use of Native American imagery in sports is possible. The Cleveland Guardians are further proof.”

Washington owner Dan Snyder said the change pays “homage to our local roots and what it means to represent the nation’s capital."

“As we kick off our 90th season, it is important for our organization and fans to pay tribute to our past traditions, history, legacy and the greats that came before us," Snyder said. “We continue to honor and represent the Burgundy and Gold while forging a pathway to a new era in Washington.”

President Joe Biden welcomed the name change by posting a picture on Twitter of Commander, his recently acquired German shepherd puppy, in front of the White House.

“I suppose there’s room for two Commanders in this town,” Biden wrote.

Starting in 1933 in Boston until two seasons ago, the team used the name Redskins — which offended Native Americans and others.

“Redskins” is the worst name that Native Americans can be called in the English language, according to Harjo. She said the word hearkens to a time when bounties were paid for the scalps of Native Americans.

While thousands of high schools, colleges and professional sports organizations have dropped Native imagery and mascots, she estimated about 1,000 remain.

“All of this cultural thievery really has to stop,” Harjo said. “What the Washington team and the Cleveland team have done is to remove two of the most grotesque and vile images and names that exist. They provided by example what can be done even if you’re making a fortune doing it.”

“Even if they didn’t think it was 100% wrong, the owners, a whole lot of people did. And so they had to as well. So, good, as long as they can help clear the decks.”

Ray Halbritter, representative of the New York-based Oneida Indian Nation and leader of the Change the Mascot campaign, said the name change is “a victory for all of those around the world seeking to advance inclusivity and respect in our societies.”

“Yet, equally important is how we all choose to remember what was involved in getting the team to finally change its name,” Halbritter said.

As the Commanders, Washington keeps the same burgundy and gold colors that were around for the three Super Bowl championships in the 1980s and early ’90s glory days. It follows the desire of team president Jason Wright and coach Ron Rivera for the new name to have a connection to the U.S. military.

Commanders was chosen over other finalists such as Red Hogs, Admirals and Presidents. Red Wolves, an initial fan favorite, was ruled out earlier in the process because of copyright and trademark hurdles.

The rebranding process had been going on since the summer of 2020, when team officials opted for the temporary Washington Football Team name that lingered into the 2021 season.

The change comes amid the organization’s latest controversy: dozens of former employees describing a toxic workplace culture, which caused Snyder to commission an investigation that was taken over by the NFL. After the investigation by attorney Beth Wilkinson’s firm, the league fined Washington $10 million and Snyder temporarily ceded day-to-day operations of the team to his wife, Tanya, while he focused on a new stadium agreement.

The league did not release a written report of Wilkinson’s findings, a move that sparked criticism. The U.S. House of Representatives Committee on Oversight and Reform is holding a roundtable discussion Thursday with a handful of former team employees to discuss their experiences.

Getting a stadium deal done is next on the agenda for Snyder and his front office. The team’s lease at FedEx Field expires after the 2027 season and momentum is building for an agreement in Virginia, though sites in Maryland and the District of Columbia are still under consideration.