Watched: Beckham says NFL has 'different' rules for him 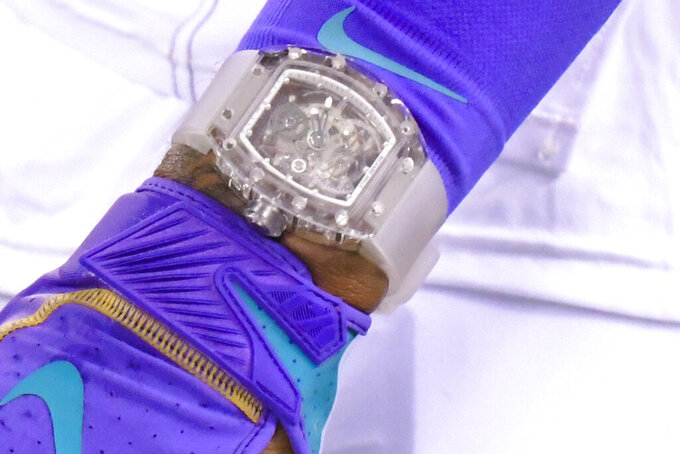 And speaking of watches, football's fashion plate has another new one.

Beckham said Wednesday that he believes the league is holding him to a different standard than other players, pointing to Monday night's game against the Jets as an example of how he's being singled out.

"I don't know if my rule book is specific to the rest of the league," he said. "I think I have a different rule book."

In his first game back in New York since being traded by the Giants, the Browns' polarizing wide receiver was pulled from the field in the first quarter by officials who told him his helmet visor was illegal. Just last week, Beckham caused a minor uproar by wearing a $200,000 Richard Mille watch on the field in Cleveland's opener. The league informed him not to wear it again, but the three-time Pro Bowl said he would do what he wanted.

While he didn't wear one against the Jets, Beckham sported another Mille timepiece during warmups.

But Beckham found it curious he would be disciplined for his visor.

"Same thing I always tell you or whatever I tweeted: If it ain't one thing, it's another," he said. "Being there are people across the league with black visors, tinted visors, reflective visors, and my visor is clear, and you pull me off the field on third down with no warning, no nothing. ... It's not going to stop me. I'm going to take it off, put on another one and hopefully get clearance, 'Mom, am I OK? Like can I go play now? And then I'm gonna do my thing. Nothing's going to bother me. Nothing's going to stop me.

"My mind is clear right now."

Beckham was asked if the league was singling him out.

"I don't even want to get into that," he said. "I'll let you decide. But I mean, just open your eyes a little bit. Like I said, there's people across the league with tinted visors, black visors and it's me on Monday night in New York, la, la, la, and and pull him off the field. ... I feel bad on my part that I let the team down there. But you just learn from it."

Before making his comments about the visor, Beckham said he was done talking about watches, but only after he gave an endorsement to a new business partners.

The 26-year-old has partnered with Swedish watchmaker Daniel Wellington.

The, ahem, timing of the deal was interesting given the publicity Beckham created by wearing the Richard Mille watches.

Beckham smiled when he was asked if it was orchestrated.

"There's always a method to the madness," he said. "The partnership with Daniel Wellington, I'm very happy to do that. But again, I'm just off of the watch topic. I'm going to leave it alone from now on. I'm strictly on football. Now you know, Daniel Wellington. That's just the bottom line. I'm off it. I'm not talking about watches anymore. I'm done."

NOTES: Beckham called Giants quarterback Eli Manning "a brother of mine" and said he "has nothing but love" for his former teammate who has been benched in favor of rookie QB Daniel Jones. ... Starting RT Chris Hubbard (foot) was among several notable players to miss practice Wednesday as the Browns ramped up preparations for Sunday's game against the Rams. Also missing: TE David Njoku (concussion/wrist), LB Christian Kirksey (chest), safeties Damarious Randall (concussion) and Morgan Burnett (quadriceps), DT Larry Ogunjobi (ankle), LB Adarius Taylor (ankle) and backup T Kendall Lamm (knee). ... DE Chris Smith was excused for personal reasons as he continues to mourn the death of his girlfriend killed in a traffic accident last week. ... A person familiar with Njoku's injury said he broke his right wrist and could need surgery. Njoku will visit a specialist before an operation is scheduled, said the person who spoke to The AP on condition of anonymity. ... RB/PR Dontrell Hilliard returned after being sidelined last week with a concussion. ... Rookie P Jamie Gillan was the AFC's Special Teams Player of the Week after his performance against the Jets. He pinned them inside the 20-yard line five times.