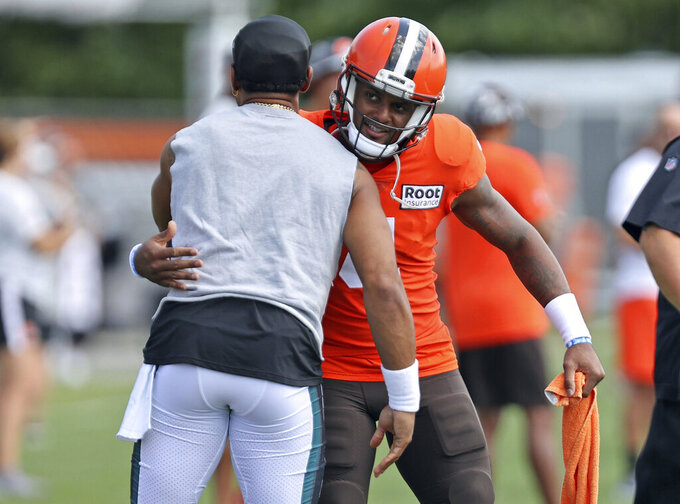 Philadelphia Eagles quarterback Jalen Hurts and Cleveland Browns quarterback Deshaun Watson greet each other during a joint practice at NFL football training camp, Thursday, Aug. 18, 2022, in Berea, Ohio,. Watson has reached a settlement with the NFL and will serve an 11-game unpaid suspension and pay a $5 million fine rather than risk missing his first season as quarterback of the Cleveland Browns following accusations of sexual misconduct while he played for the Houston Texans. (Joshua Gunter/Cleveland.com via AP)

It's always something with the Browns, who have a well-chronicled history of missteps.

Deshaun Watson's acceptance of an 11-game suspension and $5 million fine in a settlement with the NFL over alleged sexual misconduct has left the Browns wondering what will become of a season they believed could be special.

Watson won't be back until December, at the earliest, and only then if the three-time Pro Bowler satisfies the league's requirements that he undergo an evaluation by behavioral experts and follows their treatment program.

The Browns knew there was a strong possibility they'd be without Watson for an extended period. They signed him for five years despite the lawsuits brought by two dozen women in Texas.

And now that they know exactly the time frame for his absence, the question becomes can they survive until Watson is eligible to return on Dec. 4 — against, of all teams, the Texans.

“We still have 17 games to play,” Browns general manager Andrew Berry said Thursday, shortly after Watson's punishment became public. "We think we have a number of talented players and coaches who are in that locker room. Our expectation is still to have a competitive team and go and try to win every game.”

Jacoby Brissett is Cleveland's new starting quarterback, and the 29-year-old has a track record of being a capable replacement. He's done it with New England, Indianapolis and Miami while posting a 14-23 record as a starter.

Not nearly as flashy or dynamic as Watson, he's more of a game manager. His experience is a huge plus — on and off the field. Brissett is a leader, and by all accounts well-liked and respected by his teammates and coaches.

"A pro’s pro, somebody who is going to lead from out in front, works very hard at his craft and just is an outstanding teammate,” coach Kevin Stefanski said, essentially repeating comments he's made about Brissett throughout training camp.

Stefanski believes the Browns, who have had a league-high 32 starting quarterbacks since 1999, can still accomplish their goals with Brissett.

“The guys have trust in each other, and I know they have trust in Jacoby,” he said. "Ultimately, this is the best team game there is.”

Brissett began getting the majority of the snaps with Cleveland's first-team offense earlier this week as the Browns enacted their plan with Watson's suspension imminent.

Brissett threw mostly short passes during the Browns' practice against the Philadelphia Eagles on Thursday, and he'll get more work against them Friday before sitting out Sunday's exhibition game between the teams.

Stefanski plans to treat next week's final preseason game against Chicago as a dress rehearsal for the Sept. 11 opener against Carolina — and probably former Browns starting QB Baker Mayfield.

It might also be something of a final audition for Brissett to prove he's ready to take the reins in the regular season.

With a somewhat soft early schedule, the Browns felt comfortable Brissett could handle subbing for Watson for six games or even eight, if that had been the resolution. But 11 might be asking a lot of him.

In signing Watson for $230 million and fully guaranteeing his contract, Browns owners Dee and Jimmy Haslam have shown they're willing to do whatever's necessary to win, even at the expense of tarnishing their reputations and their team's image.

This Watson move was risky and to this point hasn't paid off.

Now that they know he'll miss 11 games, the Browns could be tempted to make a run at Jimmy Garoppolo, a QB they've considered before and who might be available via trade or when San Francisco waives him later this month.

Garoppolo is appealing on several levels for the Browns. He's 33-14 as a starter and has the playoff experience Brissett lacks. He's also looking to restart his career following offseason shoulder surgery and being displaced as the 49ers starter by Trey Lance.

In the Browns, Garoppolo would be joining a team with a well-rounded roster.

For now, Berry's sold on Brissett.

"No different than any other position on the roster, we will continue to evaluate our team over the course of the camp, but really pleased with Jacoby.”

NOTES: All-Pro Myles Garrett missed his fourth consecutive practice to be with an ill family member. Stefanski said he expects Garrett back “soon.” ... The Eagles and Browns were well-behaved during the practice in which there was no tackling to the ground.