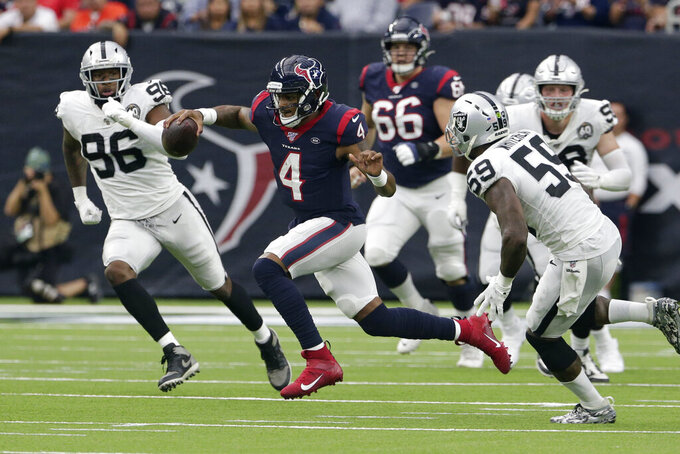 HOUSTON (AP) — Scrambling to make a play, Houston's Deshaun Watson took a cleat above his left eye, adjusted his helmet but still couldn't really see. So he tossed the ball toward the end zone where he expected tight end Darren Fells to be.

"I kind of threw it blind," Watson said. "But I ... assumed where he was going and kind of adjusted and let my arm guide it. I didn't even see the play until after the game. I just kind of laid there and heard the crowd go crazy and knew we scored."

Watson threw for 279 yards and three touchdowns, including the go-ahead score in the fourth quarter to lift the Texans to a 27-24 win over the Oakland Raiders on Sunday in a game where the team lost star defensive end J.J. Watt to a season-ending injury to a pectoral muscle.

There were about 6½ minutes left when Watson connected with Fells on the 9-yard scoring toss to put Houston up 27-24 for its first lead of the game.

"You see him do it time and time again," coach Bill O'Brien said. "That's who he is, he's a winner. We're thrilled he's on our team."

Oakland coach Jon Gruden was asked about how Watson was able to complete that play.

"You see Michael Jordan, you see some of the great athletics plays in any sport, you've got to tip your hat to the guy," Gruden said. "We had him three times, and then he makes an unbelievable throw."

Houston (5-3) forced a punt on the next drive when Gareon Conley, who was traded to the Texans from Oakland this week, knocked down a pass to Tyrell Williams on third down.

Derek Carr had 285 yards passing with three touchdowns as the Raiders (3-4) lost for the second week in a row.

"This one hurt my heart so much," Carr said. "We only had three possessions in the second half ... and got points on two of them. The third one ... I felt like we should still be on the field."

The Texans had a chance to take the lead early in the third quarter, but Watson was sacked on third-and-11 from the 12 and they had to settle for a field goal that cut the lead to 14-13.

Carr found Williams on a 46-yard touchdown pass later in the third to make it 21-13.

Houston got within 21-20 when Watson threw a 4-yard touchdown pass to Fells on the last play of the third quarter.

Carr hit Hunter Renfrow on a short pass and he evaded a tackler and dashed 65 yards for a touchdown to put the Raiders up 7-0 with about four minutes left in the first quarter.

The Texans tied it later in the first when Watson threw a 12-yard touchdown pass to Duke Johnson.

Darren Waller put the Raiders back on top when he grabbed an 8-yard reception for a touchdown with 9½ minutes left in the second quarter. Waller celebrated the score with a nod to Houston by impersonating Rockets star James Harden. He faked a between the legs dribble before mimicking Harden's signature step back, taking an imaginary shot and finishing by doing the NBA star's stirring the pot celebration.

The Texans cut the lead to 14-10 at halftime with a 33-yard field goal late in the second quarter.

Watt was injured in the second quarter and tweeted afterward that he was done for the season.

His tweet said : "This game can be beautiful and it can also be brutal. Absolutely gutted that I won't be able to finish the season with my guys and give the fans what they deserve. I truly love this game and can't stand letting you guys down. Thank you for all of the thoughts & well-wishes."

That tweet came after he retweeted a video of him making a tackle for a loss. The caption on the tweet read: "Look out for No. 99," and he added the comment: "Shoulda told my pec to look out lol."

Watt had three tackles, including one for a loss, and swatted down a pass before he was injured.

Texans: Face the Jaguars in London next Sunday.

an hour ago
By Pat Graham 3 hrs ago
By Arnie Stapleton 7 hrs ago
By W.g. Ramirez 10 hrs ago
By Brett Martel 12 hrs ago