Welcome back: Berry returns to Browns as NFL's youngest GM 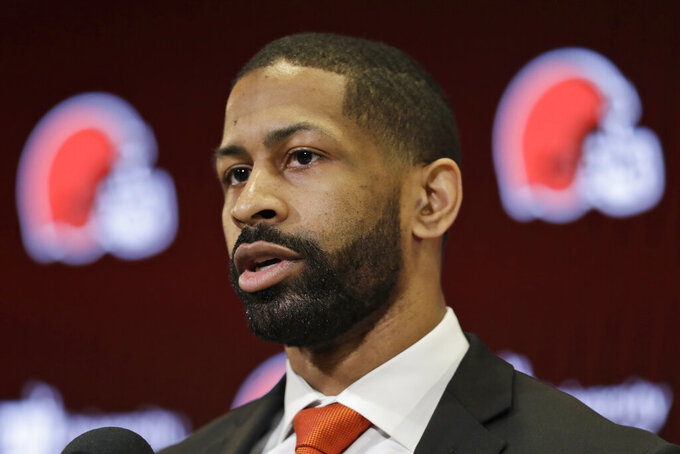 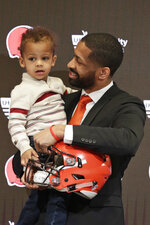 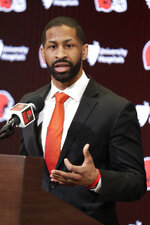 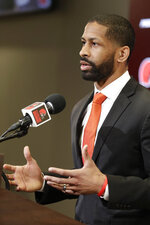 BEREA, Ohio (AP) — As Andrew Berry waited to be welcomed back as Cleveland's new general manager, his baby son, Kairo, let out a couple of cranky cries before settling down for a nap.

Later, his 2-year-old son, Zion, asked Berry if he could wear a helmet.

The Browns have turned to youth in their front office. Maybe this will work.

At just 32, Berry is believed to be the youngest GM in NFL history and he's returned to Cleveland after one season in Philadelphia to encounter some familiar problems with the Browns, who remain unstable, underachieving despite a talented roster and without a playoff appearance since 2002.

Berry said he returned to the team in part for a chance to work with new coach Kevin Stefanski, who was hired last month after 13 seasons in Minnesota. Stefanski's only 37, giving Cleveland a fresh, young duo of decision-makers the Browns hope can grow and thrive together for years.

“I am much older than Andrew,” Stefanski quipped, adding he missed his own kids after seeing Berry's.

Berry joked he didn't receive an upgraded parking space upon his return to Cleveland, where he was vice president of player personnel from 2016-18 under GM Sashi Brown. During that span, the Browns went 1-15, 0-16 and only made minimal improvement because of some poor drafts.

The team was often accused of “tanking” to get high draft picks and they used the No. 1 overall selections in 2017 and 2018 on star defensive end Myles Garrett and quarterback Baker Mayfield, respectively.

Berry isn't hiding from his role in not making the Browns much better, but he's determined to get things right this time around.

“That stretch is a very painful period for our fans, for the city and for everybody internally in the organization,” he said. "I can assure you that all of us that were there during that time period were equally disappointed with the results during that time. Now, the one thing I can say is that the team and the organization is at a much different state than it was heading into that 2016 season, whether it was the foundation of the roster or the overall strategy.

“There is no secret that the strategy at the time was to accumulate assets, whether it was cap space, picks and players, that would lead to a foundation of long-term success, but I can assure you that winning is at the forefront of everyone’s minds in the organization.”

Berry is just the second current African-American GM in the NFL, joining Miami's Chris Grier. He's proud to follow in the footsteps of black executives like Ozzie Newsome. Berry's sensitive to the league's poor track record with minority hiring, and remains hopeful others will get the same opportunity he's been given by the Browns.

“Part of this is exposure," said Berry, who was joined at the news conference by his wife, Brittan, his parents and brother. "There are tons of talented executives across the NFL that fit different demographic profiles, whether it is age or race or quite honestly even for gender at this point in time. I think certainly part of it is just increasing awareness because listen, there are a ton of talented executives across the league already.”

Berry's first week on the job has been focused on getting aligned with Stefanski on their vision for the Browns before digging into other areas. Berry did address some other key issues:

— He's confident Mayfield will rebound after struggling in his second season. Berry had a hand in drafting the 2018 Heisman Trophy winner and his view of him hasn't wavered.

“Still have a lot of belief in Baker as a quarterback, his talent and what we think he can become in the NFL,” he said. "Looking forward to seeing what Kevin, (offensive coordinator) Alex (Van Pelt) and his staff do with Baker this spring and into the fall. We are really excited about his future, and I am really excited about the work that Kevin is going to do with him.”

— Berry eased the concerns of some Browns fans who worried the team was going to become more reliant upon analytics as the basis for decisions.

“We will be a scouting-centered front office because I have always believed and I continue to believe scouting to be the lifeblood of roster building in the NFL,” he said.

— He's hopeful Garrett will be reinstated by Commissioner Roger Goodell, who suspended the sack specialist indefinitely after he struck Pittsburgh quarterback Mason Rudolph with a swung helmet in the final seconds of a game on Nov. 14.