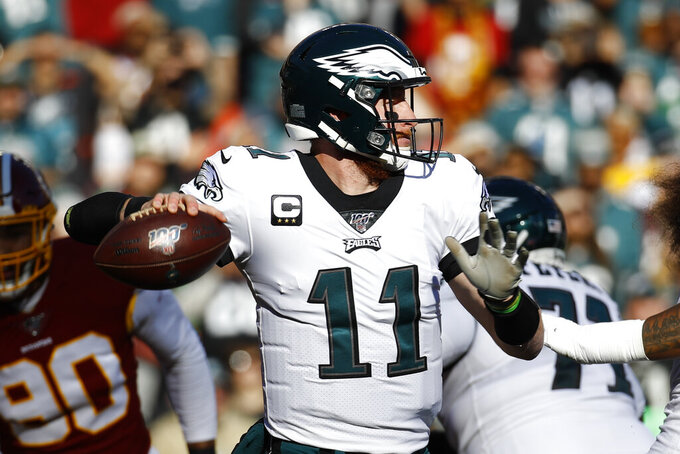 Philadelphia Eagles quarterback Carson Wentz (11) passes the ball against the Washington Redskins in the first half of an NFL football game, Sunday, Dec. 15, 2019, in Landover, Md. (AP Photo/Patrick Semansky) 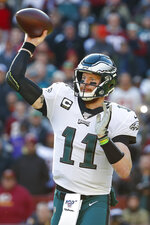 PHILADELPHIA (AP) — Carson Wentz has been clutch when the Philadelphia Eagles needed him most.

Now he has to do it again.

Wentz engineered his second consecutive comeback win, setting up a battle for the NFC East title when the Eagles (7-7) host Dallas (7-7) this week.

Wentz completed 30 of 43 passes for 266 yards and three touchdowns in a 37-27 win at Washington on Sunday. His 4-yard TD toss to Ward put Philadelphia ahead with 32 seconds remaining.

"He's doing some really nice things for us," Eagles coach Doug Pederson said of Wentz. "He's understanding the offense and where everybody is and spreading the ball around. Of course, our running attack has helped that. The screen game has helped that, and that just comes from me calling more of those plays for him and helping him be successful there.

"He's just maturing that way and it's really good to see. He's understanding the game, and it takes time. With young quarterbacks and young players in this league, it takes time, and that's where he's headed and it really has been good to see the last couple weeks."

Ward, who played quarterback at the University of Houston and converted to receiver after being undrafted, spent the 2017 season on the Eagles' practice squad. He played for San Antonio in the Alliance of American Football earlier this year and returned to Philadelphia's practice squad this season. Injuries to DeSean Jackson. Alshon Jeffery and Neslon Agholor gave him an opportunity. He's made the most of it.

Ward had seven catches for 61 yards and his first career score. No other wideout caught a pass against Washington.

"We're excited that (we) had a chance to bring him up," Pederson said. "We know the type of player he is, and he's proven that on the field."

The running game produced 157 yards with rookie Miles Sanders gaining a career-high 122. The Eagles are 22-2 under Pederson when they rush for more than 120 yards as team.

A wide receiver other than Ward has to make a catch. The Eagles only had three active wideouts for the second straight week. Rookie second-round pick J.J. Arcega-Whiteside had two targets and couldn't hang onto a ball in his hands in the end zone for a touchdown. Robert Davis played only 16 snaps and got no targets.

Ward made his first career catch in Week 12 against Seattle. He has quickly become the team's top wideout and someone Wentz trusts in important spots. Five of his receptions against the Redskins came in the fourth quarter, including three in the final two minutes. STOCK DOWN

Arcega-Whiteside, the 57th overall pick, played 71 snaps and didn't make a catch. He has just eight catches for 130 yards and one TD despite playing 424 snaps.

Pederson said four injured starters are "trending in the right direction." Right tackle Lane Johnson is day to day with a high ankle sprain that forced him to miss the game. Running back Jordan Howard has sat out the past five games with a stinger. Agholor has missed the past two games with a knee injury. Defensive end Derek Barnett didn't play because of an ankle injury.

69 percent — The Eagles converted 11 of 16 third downs, including three on their two TD drives in the fourth quarter. They dominated time of possession, controlling the ball for 36:57.

The division is on the line against the Cowboys. Dallas has won the last four meetings, including the last two in Philadelphia but one of those was a meaningless matchup to end the 2017 regular season. The Cowboys routed the Eagles 37-10 on Oct. 20.