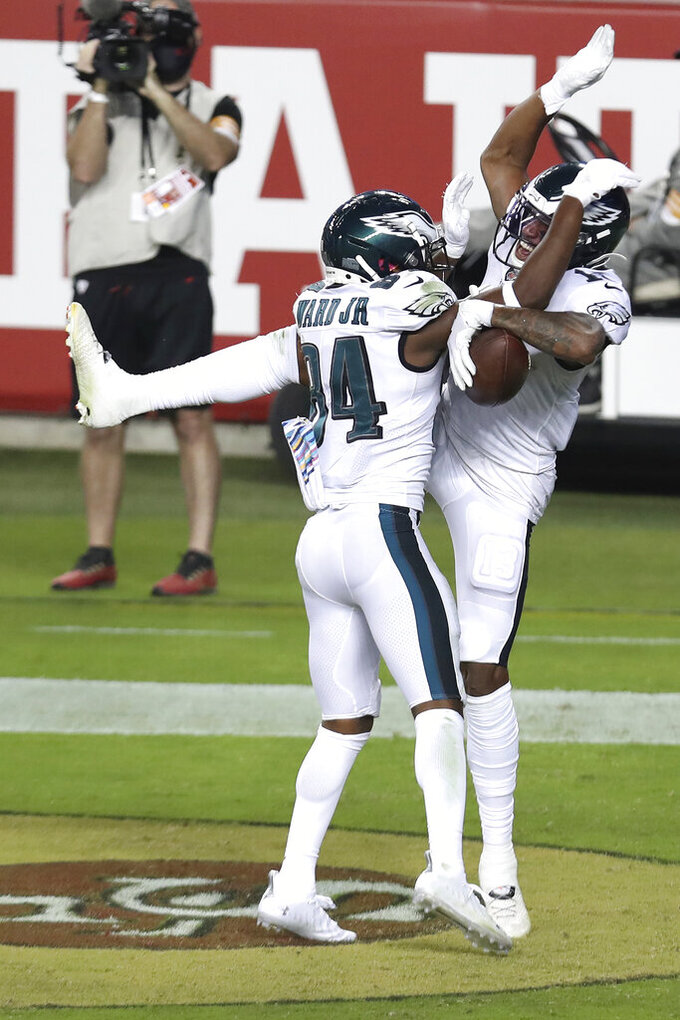 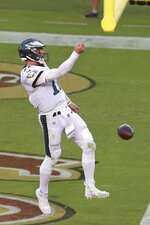 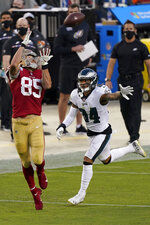 SANTA CLARA, Calif. (AP) — A couple of unlikely players helped deliver the Philadelphia Eagles their first win of the season.

Travis Fulgham caught a go-ahead 42-yard touchdown pass from Carson Wentz with 5:50 remaining and Alex Singleton returned an interception for a score to lift the Eagles to a 25-20 win over the San Francisco 49ers on Sunday night.

“It’s a huge relief. Big team win," Wentz said. “It’s fun to see these young guys step up and make plays in big moments like this.”

With the Eagles (1-2-1) missing their top three receivers and No. 2 tight end Dallas Goedert, the little-known Fulgham, who came into the game with no career catches, delivered the play of the game for Philadelphia.

The Eagles were backed up with a second-and-18 from the 42 after Jalen Hurts botched a shotgun snap. But Fulgham got past backup cornerback Dontae Johnson and Wentz delivered a perfectly placed pass for the score that gave Philadelphia an 18-14 lead.

“After we broke the huddle, Carson said: ‘Be ready,’" Fulgham said. "At first, I lost the ball, but since Carson gave me a great throw, I was able to locate it and caught in the bread basket.”

Nick Mullens then threw an interception that Singleton returned for a TD on the next drive for the 49ers (2-2), who were sent to their second loss in as many home games. Singleton had played only 11 defensive snaps coming into the game.

Mullens committed three turnovers, including losing a fumble on a strip sack by Cre’Von LeBlanc that Malik Jackson recovered to set up the go-ahead score.

Mullens went 18 for 26 for 200 yards and one touchdown before being replaced by C.J. Beathard following his third giveaway.

“We had plenty of opportunities. I really just didn’t execute," Mullens said. "The way I’m feeling is pretty black and white right now. I just didn’t execute. That’s what it comes down to. Three turnovers, 14 points off turnovers. That’s really about it.”

Beathard led a late TD drive and got the Niners to the Eagles 33 before his desperation heave fell incomplete in the end zone on the final play.

“After this game, we wanted to be dog tired," defensive back Jalen Mills said. "We had to give everything we had to get this win.”

The Niners are hoping to get starter Jimmy Garoppolo back next week from an ankle injury that has sidelined him for two games.

Rookie Brandon Aiyuk hurdled his way to a 38-yard touchdown run on a lateral from Mullens, and George Kittle had a career-high 15 catches for 183 yards and a score to lead the Niners.

Wentz came into the week with the lowest passer rating and most turnovers in the NFL. But he ran for an 11-yard TD and threw for 193 yards and a score to move the Eagles into first place in the hapless NFC East with their first win of the season.

“First place sounds really good, but we have a long way ahead of us," coach Doug Pederson said. “Only the first quarter of the season is done. We got a long road ahead. These guys don’t quit. It’s a resilient group.”

The Eagles got their first defensive takeaway of the season thanks to a poor decision by Mullens. With the Niners in the red zone, Mullens threw a ball up for grabs while under pressure and Rodney McLeod came up with it. They added two more in the fourth quarter. Philadelphia’s only takeaway coming into the game came on special teams.

Wentz threw his NFL-worst seventh interception on Philadelphia’s second drive of the game. His pass was deflected by Javon Kinlaw and picked off by Azeez Al-Shaair. The seven interceptions equal Wentz’s total in each of the past three seasons and are his most since he had 14 as a rookie in 2016. The last Eagles quarterback with at least seven picks in the first four games was Ron Jaworski in 1982.

49ers: DL Ezekiel Ansah left the game in the first half with a biceps injury that coach Kyle Shanahan fears could be season ending. ... CB K'Waun Williams left with a knee injury in the fourth quarter.

5 minutes ago
By Pat Graham 2 hrs ago
By Arnie Stapleton 6 hrs ago
By W.g. Ramirez 9 hrs ago
By Brett Martel 10 hrs ago