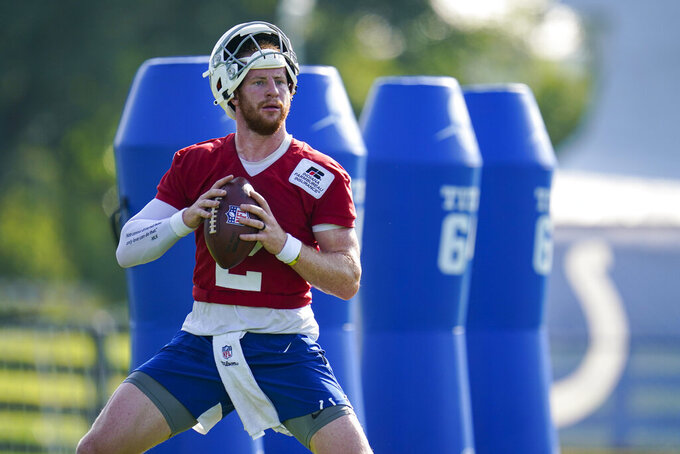 Coach Frank Reich planned to use this week to test Wentz and Nelson, who both had foot surgery to remove a bone fragment. Both did limited work three straight days last week and were cleared for full action this week.

That won't happen now — at least not for Wentz, who already missed three weeks because of the injured left foot.

Pascal has been the Colts most consistent receiver the past two seasons when they were hit hard by injuries.

It’s unclear whether Kelly, Pascal or Wentz tested positive or were close contacts to someone who did.

The loss of Wentz is the toughest blow because of his limited amount of work with his new teammates. Reich remains hopeful Wentz, who was acquired from Philadelphia in a March trade, will start the Sept. 12 season opener against Seattle. If he can't, second-year quarterback Jacob Eason would likely make his NFL debut.

“Jacob’s handled himself like a pro," Reich said Sunday. “I think his bright spots have really been throwing the ball down the field, making some nice chunk plays down the field and I think the other bright spot for Jacob was that it wasn’t too big for him. He got in there and looked comfortable, looked like he belonged."

COVID-19 has been a concern for the Colts, who have consistently ranked near the bottom of the league in vaccination rates. Reich's most recent update was that about 75% of players had been vaccinated.

The absences have hit hard.

Now three more are on it.

Wentz is one of several Colts players who declined to answer questions about vaccination status, calling it a personal decision. He did wear a mask while helping teammates on the field during his previous absence.

“We all feel that sense of we have to respect it and make good decisions to — like I said — do nothing to derail this season," he said after the first camp practice. “Everybody is in this together one way or the other and we all have to do our part to keep everyone safe.”