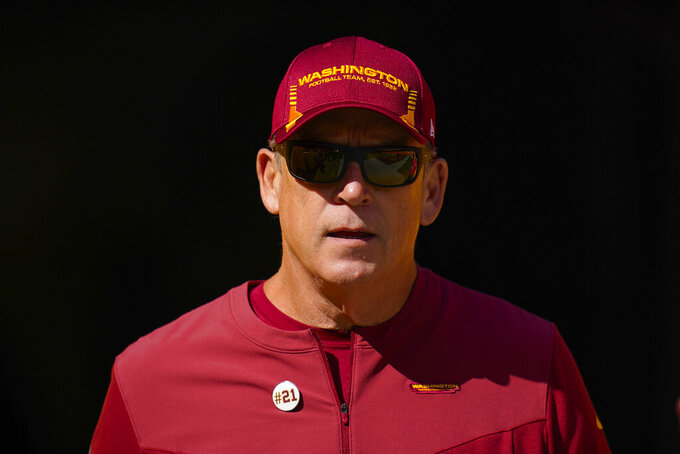 Washington Football Team defensive coordinator Jack Del Rio takes the field prior to the start of the first half of an NFL football game against the Kansas City Chiefs, Sunday, Oct. 17, 2021, in Landover, Md. (AP Photo/Patrick Semansky)

ASHBURN, Va. (AP) — Asked about the head coaching vacancy at the University of Southern California that he previously expressed interest in if it ever existed, Jack Del Rio joked about Mike Tomlin's answer to the same question earlier this week.

Washington's defensive coordinator did not go nearly as far as the Pittsburgh Steelers coach did, calling it a “joke” that he'd take a college job and adding, “Never say never.”

But Del Rio expressed appreciation for his current gig when USC came up.

“I’m gonna channel some Mike Tomlin right now," Del Rio said Thursday. "Did he shut it down, or what? Mike’s beautiful. So, yeah. I feel really good about being the defensive coordinator in the NFL, and I like my job.”

Del Rio in 2019 told ESPN Radio, "If and when there was ever was anything, yeah I would be interested.” At the time, he expressed support for coach Clay Helton, who was fired earlier this season.

Del Rio was an All-American linebacker at USC in the 1980s. He has coached exclusively in the NFL since 1997 and is in his second season with Washington.

He previously served as head coach of the Raiders and Jaguars.