What now? Steelers with more questions as Hodges stalls 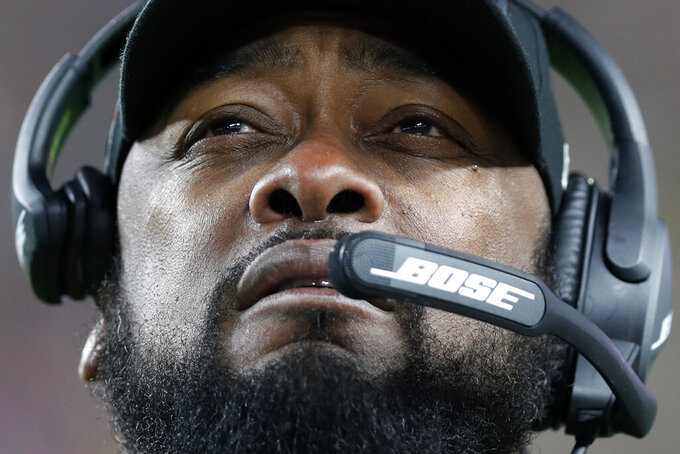 Pittsburgh Steelers head coach Mike Tomlin walks the sideline during the first half of an NFL football game against the Buffalo Bills in Pittsburgh, Sunday, Dec. 15, 2019. (AP Photo/Keith Srakocic)

PITTSBURGH (AP) — The ride was fun while it lasted.

Hodges has etched his name in team lore no matter how his story turns out, but his abysmal four-interception performance in a loss to Buffalo on Sunday night exposed all the shortcomings the team had done a good job of hiding during his previous five appearances. The leading passer in Football Championship Subdivision history at Samford wasn't drafted because there were concerns about his arm strength, concerns that came to light as the Bills tracked down floater after floater.

Steelers coach Mike Tomlin had stressed he would determine the starting quarterback on a week-by-week basis when he opted to replace Mason Rudolph with Hodges before a game against Cleveland two weeks ago. Still, it seemed as if the popular Hodges had locked down the gig for the rest of the season after leading the Steelers (8-6) to wins over the Browns and Arizona.

Hodges earned the job because, as Tomlin put it, “he didn't kill us.” On Sunday night, Hodges did kill Pittsburgh's chances at leapfrogging the Bills for the top wild-card spot in the AFC by taking the kind of risks he'd largely avoided in his earlier starts.

“Usually you can learn from these types of games more than you can a win and a better performance," Hodges said. “So, just go in there learn, get better, and shake it off and go."

Tomlin declined to name a starter for next weekend's visit to the New York Jets. The same coach who earlier gave Rudolph a do-over after a four-pick game against the Browns seems unlikely to pull Hodges after a similar outing. Whoever the quarterback is, he would benefit from better play in front of him and behind him.

The Bills sacked Hodges four times, forced him to fumble once and in general gave him little time to throw. Pittsburgh largely abandoned the running game despite the return of James Conner from a shoulder injury. The Steelers gained just 51 yards on 15 carries and relied almost exclusively on the air to move the ball in the second half, a move that backfired against one of the NFL's best defenses.

The defense continues to give Pittsburgh chances to win despite the team's offensive limitations. The Steelers have held each of their past five opponents to 300 yards or fewer and lead the NFL in both sacks and turnovers. The unit's consistency has been remarkable. It will need two more massive performances against the Jets and the Ravens if Pittsburgh wants to finish off an improbably playoff run.

The wildcat formation revived Pittsburgh's dormant running game during a victory over the Bengals in late-September. The Steelers have been unable to find similar success in the intervening weeks and the botched handoff between Conner and Diontae Johnson late in the first half Sunday cost Pittsburgh at least three points and maybe seven. Time to put it away for good.

Is it possible that T.J. Watt is now the best Watt brother in the NFL? The third-year linebacker is the first player in franchise history to have 13 sacks in more than one season, heady territory considering Pittsburgh's lineage of pass rushers. STOCK DOWN

Punter Jordan Berry's pretty solid season took a nosedive against the Bills. His 22-yard punt set up Buffalo's first score and he struggled to find anything resembling consistency.

Conner appeared no worse for the wear after playing for just the second time in seven weeks. Wide receiver JuJu Smith-Schuster likely needs to take a significant step forward this week if he wants to play again in 2019. His comeback from a knee injury hit a bump when he aggravated it in practice last Thursday.

18-5 — Pittsburgh's record against the New York Jets, including 4-1 in their past five meetings.

Trying to make sure old friend Le'Veon Bell doesn't play spoiler when the Steelers visit the Jets. Bell made three Pro Bowls for Pittsburgh from 2013-17 before sitting out all of 2018 after refusing to sign his franchise tag. He landed a lucrative deal with New York, but has been largely ineffective for a team heading to another losing season.