When NFL needed change, Paul Tagliabue was choice in 1989 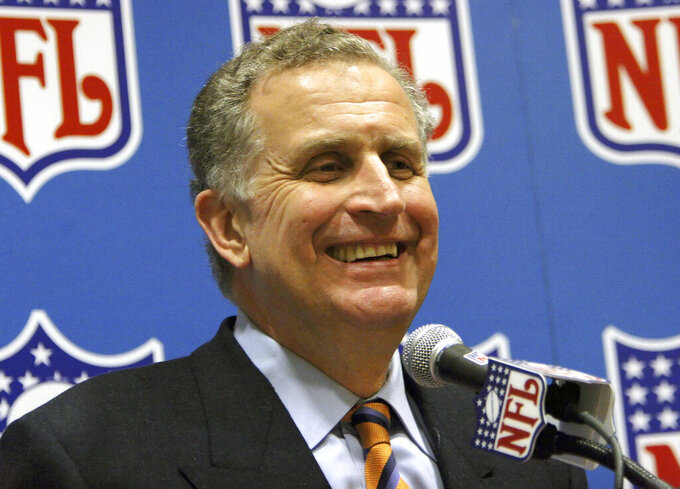 FILE - In this March 8, 2006, file photo, NFL Commissioner Paul Tagliabue smiles while addressing the media to detail terms of a six-year deal approved at the NFL owners meeting in Grapevine, Texas. NFL team owners knew in 1989 they needed a leader who was going to bring the league out of the dark decade of the 1980s, when litigation, labor troubles and stagnant TV ratings dramatically slowed the growth of the league and hastened Pete Rozelle's departure. They chose Tagliabue. (AP Photo/D.J. Peters, File)

The NFL needed a change.

And team owners knew one thing in 1989 when they sought a successor to Pete Rozelle: They wanted a commissioner who was going to bring the league out of the dark decade of the 1980s, when litigation, labor troubles and stagnant TV ratings dramatically slowed the growth of the league and hastened Rozelle's retirement.

In Paul Tagliabue, they found someone who could guide them through a projected legal and labor jungle while keeping the profits flowing.

While Rozelle didn’t hide his dissatisfaction with the path the job was taking, his retirement surprised many owners, who fell into two factions.

The old guard led by Wellington Mara, Art Modell, Lamar Hunt and Ralph Wilson, favored Jim Finks, a longtime executive with three franchises. The newer bloc of owners, including Jerry Jones, Alex Spanos and Pat Bowlen, pushed for Tagliabue, then an outside NFL counsel and close adviser to Rozelle.

“He has taken a very low profile in this league,” Finks told the Minnesota Star Tribune that year, “so he wasn’t very well known by the owners. But he was very well known to me. I knew, for at least 20 years, that every major decision Rozelle was faced with, (Tagliabue) advised the commissioner.”

As one of his first decisions, Tagliabue reached out to the players' union, then run by Gene Upshaw, a former star player for Al Davis' Raiders. Tagliabue had insisted he be directly involved in all labor negotiations, basically rendering useless the Management Council of club executives that had handled such duties for nearly two decades.

It was a wise decision: During Tagliabue’s 17-year tenure, there were no labor stoppages.

"When Paul was named commissioner after that seven-month search in 1989, that's when the league got back on track," says Joe Browne, who spent 50 years as an NFL executive and was a confidant of Rozelle and Tagliabue.

"Paul had insisted during his negotiations for the position that final control over matters such as labor and all commercial business dealings had to rest in the commissioner's office. The owners agreed and that was a large step forward toward the tremendous rebound we had as a league — an expanded league — in the '90s and beyond.”

Tagliabue's relationship with Upshaw, a Hall of Fame player, was unique. Unlike the loggerheads of previous years between the league and the NFLPA, Tagliabue and Upshaw kept the negotiations respectful and centered on what would benefit both sides. Compromise was a key ingredient, Upshaw always said — although the union often was criticized for being too accommodating.

Tagliabue also oversaw a myriad of new stadiums; initiated new on-field player safety rules; negotiated television contracts that added billions of dollars to the league's bank account; expanded the league from 28 to 32 teams; implemented a substance abuse policy that is considered among the strongest in pro sports; mentored his eventual successor, Roger Goodell; and put together a committee that established the "Rooney Rule," which requires all teams with coaching and front office vacancies to interview minority candidates.

But he certainly had his detractors, notably over concussions. The issue has plagued the NFL for decades and probably has kept Tagliabue from induction into the Pro Football Hall of Fame in which his predecessors are members.

In 2017, Tagliabue apologized for remarks he made decades ago about concussions in football, acknowledging he didn’t have the proper data at the time in 1994. He called concussions "one of those pack-journalism issues" and contended the number of concussions “is relatively small; the problem is the journalist issue."

"Obviously," he said on Talk of Fame Network, "I do regret those remarks. Looking back, it was not sensible language to use to express my thoughts at the time. My language was intemperate, and it led to serious misunderstanding. I overreacted on issues which we were already working on. But that doesn't excuse the overreaction and intemperate language.

"Bottom line, it sounded like I was shooting the messenger, which was the concussion issue. My intention at the time was to make a point which could have been made fairly simply: that there was a need for better data. There was a need for more reliable information about concussions and uniformity in terms of how they were being defined in terms of severity."

Like Rozelle, Tagliabue faced a wrenching decision after a national tragedy. While Rozelle allowed games to be played on the weekend after President Kennedy’s 1963 assassination, Tagliabue postponed all Week 2 games after 9/11, moving them into January and delaying the Super Bowl by one week.

He was universally praised for that action, as well as for many others as commissioner.

“After my coaching career was over,” says Hall of Fame player Art Shell, the NFL's first modern-day African-American head coach with the Raiders, "I had the privilege of working directly with Paul in the league office. His philosophy on almost every issue was, 'If it's broke, fix it. And if it’s not broke, fix it anyway.'

“He always challenged us to find better ways of doing things. Paul never lost sight of his responsibility to do what was right for the game. He was the perfect choice as NFL commissioner."