While teams seek next McVay, he begins playoff run with Rams 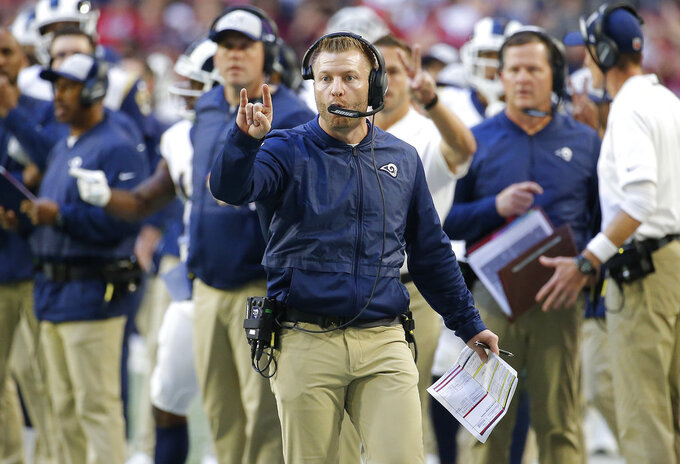 FILE - In this Sunday, Dec. 23, 2018 file photo, Los Angeles Rams head coach Sean McVay makes a call against the Arizona Cardinals during the second half of an NFL football game in Glendale, Ariz. Two years to the day after McVay became the youngest head coach in modern NFL history, he will attempt to earn his first playoff victory Saturday night when the Rams (13-3) host the Dallas Cowboys (11-6) for a trip to the NFC championship game. The Rams already have won 24 games and two NFC West titles under McVay, and they’re just two more victories away from their first Super Bowl trip in 17 years. (AP Photo/Rick Scuteri, File)

THOUSAND OAKS, Calif. (AP) — Most NFL teams with a head coaching vacancy this winter seem to be looking for the next Sean McVay.

The original is still hard at work for the Los Angeles Rams, hoping to justify his enormous influence on the football world with a big postseason run.

"I'm too young to have a coaching tree," the 32-year-old McVay said with a laugh Tuesday.

Maybe so, but McVay has put down impressive roots in just two seasons, and his Rams could blossom this month.

Two years to the day after McVay became the youngest head coach in modern NFL history, he will attempt to earn his first playoff victory Saturday night when the Rams (13-3) host the Dallas Cowboys (11-6) for a trip to the NFC championship game.

The Rams already have won 24 regular-season games and two NFC West titles under McVay, and they're just two more victories away from their first Super Bowl trip in 17 years.

McVay is invariably modest about his accomplishments with the Rams, but his success represents a blueprint that other franchises are following.

With Matt LaFleur and Kliff Kingsbury landing top jobs in the past two days alone, practically every owner and general manager seem to be seeking an energetic young coach on the cutting edge of offensive thinking to transform their franchise.

"It's certainly humbling and flattering," McVay said. "But I think, like anything else, it's a reflection of everybody that's been a part of this. That's what you love so much about football. I'm put in a better position to succeed ... based on the people that are around you here."

A direct personal connection to McVay himself clearly doesn't hurt, either: Green Bay and Arizona have proved it this week by hiring coaches who fit McVay's mold and have personal ties to him. LaFleur was on McVay's staff with the Rams last year, while Kingsbury is a good friend and like-minded offensive innovator.

"I don't laugh, I get it," Rams center John Sullivan said. "Look at how fast the turnaround was here. Look at the job (McVay) has done so far. I don't blame teams. I think it is perfectly logical to try to look for a guy in his mold."

LaFleur was a longtime quarterbacks coach until McVay hired him as his offensive coordinator in 2017. He parlayed that position into the offensive coordinator job in Tennessee, where he got to call plays — and just one year later, he reportedly landed one of the NFL's highest-profile head coaching jobs with the Packers.

McVay spoke with LaFleur shortly before his interview in Green Bay.

"Matt, obviously, he's one of my closest friends," said McVay, who worked alongside LaFleur on the Redskins' offensive staff. "To see that for him, you couldn't be more excited. He's a great football coach. Got a great understanding of offensive football. ... When you see those types of things, you can't do anything but just be really happy for a close friend."

Kingsbury is coming off three consecutive losing seasons as the head coach at Texas Tech, but he improbably landed right next to McVay in the NFC West as the Arizona Cardinals' head coach. Although McVay and Kingsbury haven't coached together, their similarities are obvious.

"I know he'll do a great job," McVay said. "We'll try to get after him twice a year, but other than that, I'm excited for Kliff. ... He's a great coach. Great communicator. Great understanding of how to apply pressure to a defense."

Kingsbury is tasked with fixing the worst offense in the NFL, which is exactly what McVay did. With a mature leadership style and cutting-edge offensive ideas, McVay transformed a franchise with 13 straight non-winning seasons and 12 consecutive non-playoff seasons into division champions at 11-5.

McVay didn't rest after an opening-round playoff loss to Atlanta, either. The Rams finished this season with the NFL's best record at 13-3, and McVay unveiled innumerable variations and innovations on his own offensive schemes, keeping defenses largely befuddled.

McVay steadfastly avoids taking sole credit for the Rams' achievements, constantly crediting his assistants and support staff when asked about any successes. And as he has probably already told LaFleur and Kingsbury, any offensive mastermind's ultimate success probably hinges on his defensive coordinator.

"If the last two years have taught me anything about being in this role, it's (that) you'd better surround yourself with a lot of people that are better than you, so that you can learn every day," McVay said.