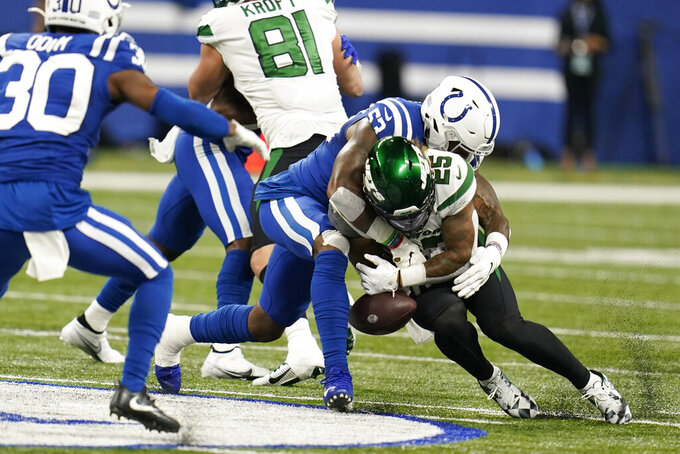 New York Jets' Ty Johnson (25) fumbles while being tackled by Indianapolis Colts' Darius Leonard (53) during the first half of an NFL football game, Thursday, Nov. 4, 2021, in Indianapolis. (AP Photo/Michael Conroy)

Then, the defense collapsed.

The combination led to yet another dreadful prime-time performance as the New York Jets lost 45-30 at Indianapolis. But the bigger concern is whether the Jets can again find solutions before they return to action Nov. 14 against Buffalo.

The good news is White's injury, initially described as being to his right forearm, does not appear to be long term. White explained he left after two of his fingers went numb and he couldn't grip the ball.

“He started to get some feeling back in the middle or late in the fourth quarter, but it was too late," coach Robert Saleh said. “We feel good about him getting healthy over the weekend and next week.”

With White watching the final three quarters from the sideline four days after making a historic starting debut with 405 yards passing and three touchdowns in a surprise win over the Bengals, the Jets (2-6) weren't the same.

Josh Johnson, White's replacement, led the Jets to one score — a short field goal — before he finished the game by throwing three TDs in the final 18 minutes to make the score more respectable.

Johnson established single-game career highs for TD passes and yards with 317, but was upset after throwing a late interception deep in Colts territory. Another touchdown would have made it a one-score game.

“We had some tough situations early," he said. “I missed some reads in the first drive and I was upset about that. A lot of guys haven’t been in the huddle with me. Once I got in a rhythm, we did some positive things.”

The more significant problem was seeing the league's No. 7 run defense fail to play up to its billing. Indy rushed for 260 yards, the highest total allowed in any NFL game this season, and averaged 8.7 yards on 30 carries.

“We have to focus on our job and what we need to do," linebacker C.J. Mosley said. “We have to swallow our tough pill and get ready for next game."

But that wasn't even the worst part of the night.

While the Jets can rebound against Buffalo after an extended break and Saleh remains hopeful White and rookie Zach Wilson (knee) will practice next week, New York may have starting safety Marcus Maye to a season-ending injury.

He hobbled off the field and went straight to the locker room with what appeared to be a non-contact injury in the third quarter. Saleh said the fear is Maye hurt his Achilles tendon.

“Losing Marcus will be a big loss, especially his leadership," Mosley said.

And despite Johnson's strong finish, the Jets also know they can't afford to keep losing quarterbacks, either.

“It was frustrating, especially when the first two drives went well," White said. “It’s not the end of the season. I think I’ll be able to play if my number is called again."

38 minutes ago
W.g. Ramirez an hour ago
By John Wawrow 3 hrs ago
By Steve Megargee 4 hrs ago
By Josh Dubow 4 hrs ago