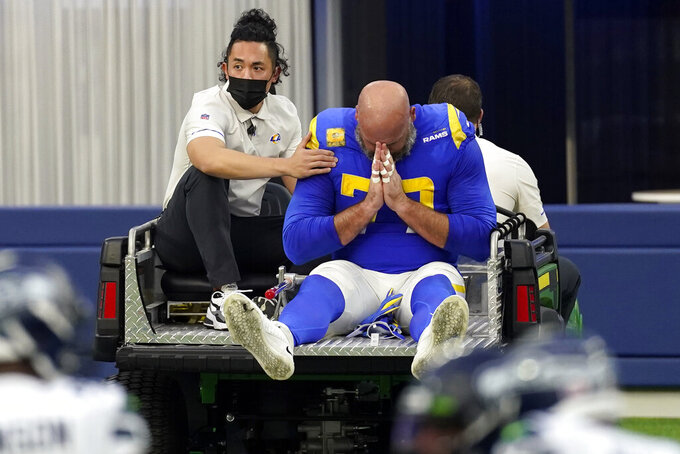 Los Angeles Rams offensive tackle Andrew Whitworth reacts as he leave the game with an injury during the second half of an NFL football game Sunday, Nov. 15, 2020, in Inglewood, Calif. (AP Photo/Ashley Landis)

Los Angeles Rams veteran left tackle Andrew Whitworth was consoled by several teammates as well as Seattle Seahawks quarterback Russell Wilson before he was taken off the field on a cart with an injured left knee late in the first half Sunday.

In New Orleans, Drew Brees missed the second half of a 27-13 victory against the San Francisco 49ers with a rib injury. He was hurt when he was sacked by San Francisco’s Kentavius Street, who was flagged for a personal foul for landing most of his body weight on the 41-year-old quarterback.

Brees was replaced by Jameis Winston at the start of the second half. Brees stood waiting with his helmet on while Winston and Taysom Hill took warmup snaps.

“When I came out in the second half and started throwing the ball (to warm up), it became really apparent that I wasn’t going to be effective,” Brees said. “I’m not sure what tomorrow holds, but you can know I’m going to do everything I can to be as effective as I possibly can for next week.”

It's unclear who will start at quarterback when the Saints face Atlanta next weekend.

Whitworth, a 15-year NFL veteran and the cornerstone of the Rams’ offense under Sean McVay, was injured when K.J. Wright accidentally hit the side of Whitworth’s leg.

As Whitworth was being helped to the cart, Wilson, wearing a mask, came over and shook his hand. Other Seahawks as well as Whitworth’s Rams teammates consoled the 38-year-old lineman.

Whitworth had played every snap this season and 99% of last season’s snaps for the Rams. Whitworth, who began his career with 11 seasons in Cincinnati, hasn’t missed a game due to injury since 2013.

Joe Noteboom, who returned from injured reserve this week, took over for Whitworth. Noteboom usually has played guard for the Rams when healthy. Also for the Rams, safety Taylor Rapp injured his knee in the first half and didn’t return and kicker Kai Forbath injured his ankle in the third quarter, during which he missed an extra point.

Carolina Panthers quarterback Teddy Bridgewater left in the fourth quarter with a right knee injury after throwing for two touchdowns and running for another in a 46-23 loss to the Tampa Bay Buccaneers. P.J. Walker finished up at quarterback and was not effective.

— Packers running back/kick returner Tyler Ervin left with a rib injury in the first half against Jacksonville.

— Giants right guard Kevin Zeitler came out of the game against the Eagles with a concussion.

— Bengals cornerback Mackensie Alexander left the game against Pittsburgh with a concussion.

— Raiders running back Jalen Richard left a game against Denver with a chest injury after a hard hit on a kickoff return. X-rays were negative.