Who was Cowboys' best 1st-round pick? Let the debate begin 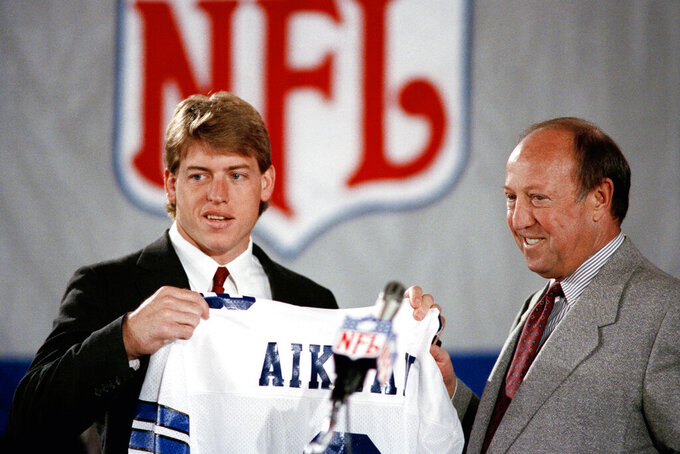 BEST FIRST-ROUND DRAFT PICK: QB Troy Aikman. The first overall pick out of UCLA in 1989 might have not won three Super Bowls without NFL career rushing leader Emmitt Smith, taken in the middle of the first round a year later. “The Triplets” included another Pro Football Hall of Famer drafted in the first round, WR Michael Irvin in 1988. The debate doesn’t stop there. Three other first-rounders are in Canton: DTs Bob Lilly (the team’s first-ever choice in 1961) and Randy White (1975) and RB Tony Dorsett (1977).

BEST SECOND-ROUND DRAFT PICK: OL Larry Allen. This is another tough call because DB Mel Renfro still holds the club record for interceptions with 52 after being drafted as a running back out of Oregon in 1964. But Allen was an All-Pro six times to once for Renfro; both are Hall of Famers. Taken in 1994 out of Sonoma State, Allen made 10 Pro Bowls in 12 seasons with the Cowboys. He was on the last of the three Super Bowl-winning teams of the 1990s.

BEST LATE-ROUND DRAFT PICK: QB Roger Staubach. Drafted in the 10th round in 1964 after winning the Heisman Trophy at Navy, the Hall of Famer’s career was delayed while he served four years of active military duty. Staubach led the Cowboys to four Super Bowls, including their first two wins. While his passing stats have long since been overtaken by Aikman and Tony Romo, Staubach led the NFL in passing four times. And “Roger the Dodger” is still the franchise leader in yards rushing for a QB.

WORST FIRST-ROUND DRAFT PICK: RB Bill Thomas. The former Boston College back never had a carry for the Cowboys, who took him 26th overall in 1972. Meantime, another running back taken in the second round that year, Robert Newhouse, played 12 seasons for the Cowboys and won a Super Bowl. Thomas followed his one season in Dallas with a year apiece in Houston and Kansas City, finishing his career with 13 carries for 36 yards.

WORST SECOND-ROUND DRAFT PICK: CB Dwayne Goodrich. The former Tennessee standout was the Cowboys’ top pick in 2000, when they had traded their first-round choice to Seattle for receiver Joey Galloway. Goodrich played just 16 games over three seasons before getting convicted in a hit-and-run accident that killed two men trying to help someone trapped in a burning car on a Dallas freeway. Goodrich spent six years in prison before his release in 2011.

BEST DRAFT TRADE: Seven months after Jerry Jones bought the team, made himself general manager and hired Jimmy Johnson as coach in 1989, they engineered a deal to send Herschel Walker to Minnesota. The complicated trade had perhaps the biggest impact of any in NFL history, maybe all of sports. The picks set the path toward three Super Bowl titles in four years. Smith was the headliner, but the deal also led to 1991 No. 1 overall choice Russell Maryland and other key pieces of the title teams.

WORST DRAFT TRADE: The Cowboys traded two first-round picks for Galloway in 2000. He tore a knee ligament in his first game and never had a 1,000-yard season in four years with the Cowboys. Dallas had three straight 5-11 records after the trade. The second-round picks in those two drafts ended up being known more for legal problems than anything else: Goodrich and QB Quincy Carter.

DID YOU KNOW THEY ONCE DRAFTED?: Billy Cannon Jr., a linebacker out of LSU, was Dallas’ first-round pick in 1984. His father was LSU's only Heisman winner before Joe Burrow won it last year. The late Billy Cannon won the award in 1959. The younger Cannon played eight games as a rookie before a neck injury ended his season. He retired the next spring on the advice of doctors.