Who’s left? Steelers running out of players and time 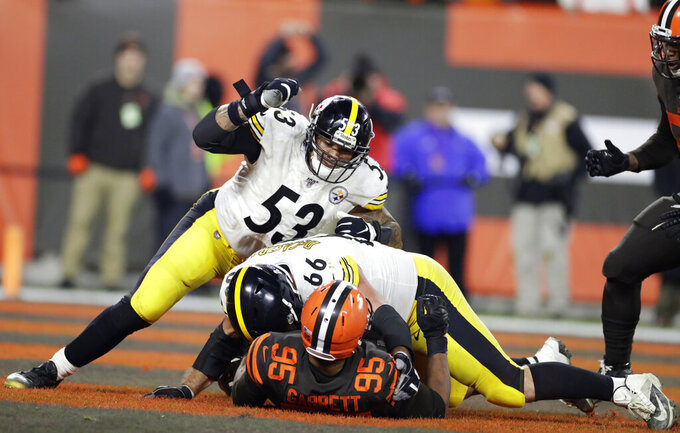 PITTSBURGH (AP) — The chaotic ending will live on in infamy. The carnage that came before it, however, could have just as significant an impact on the Pittsburgh Steelers’ season.

The ugly confrontation between Cleveland defensive end Myles Garrett and Steelers quarterback Mason Rudolph on the final play of the Browns’ 21-7 victory last Thursday— an altercation that culminated with Garrett drilling Rudolph in the head with Rudolph’s own helmet, a swing that resulted in Garrett being suspended indefinitely by the NFL — provided a chilling flashpoint that reverberated far beyond the 120 miles that separate the longtime AFC North rivals.

Rudolph insisted in the aftermath that he’s fine. Maybe, but the Steelers (5-5) most certainly are not.

Not with wide receivers JuJu Smith-Schuster and Diontae Johnson both dealing with concussions sustained following illegal helmet-to-helmet hits by Cleveland defensive backs. Not with running back James Conner aggravating a shoulder injury that could keep him out an extended period. Not with center Maurkice Pouncey facing a three-game ban for punching and kicking Garrett while attempting to retaliate for Garrett’s swipe at Rudolph.

Even when healthy, Pittsburgh’s offense has been a mixed bag with Rudolph under center after Ben Roethlisberger was lost for the season in September because of a right elbow injury. Now the Steelers face the prospect of moving forward without their top running back, two of their top three receivers and one of the best centers in the league.

“Just injuries wearing us down a little bit,” guard David DeCastro said. “That’s part of the game when you’re losing guys and stuff. It’s a player-driven league, it really is. I wish I had a better answer for you. Injuries are tough.”

And, for the Steelers this season, relentless.

Smith-Schuster and Johnson are both in the concussion protocol, their status for Sunday’s visit to winless Cincinnati (0-10) uncertain. Conner’s setback could be potentially longer term, another staggering blow to an offense that ranks in the bottom 10 in the league in both points and total yards. Yet just as troubling, however, is the play of the offensive line.

Save for a concussion that cost veteran guard Ramon Foster two games last month, Pittsburgh’s line has been relatively healthy. While the group had done a solid job protecting Rudolph before the Browns took him down four times — the Steelers entered the game having allowed the fewest sacks in the league — it has struggled to generate any significant push in short-yardage situations.

Seven times against Cleveland the Steelers faced a third or fourth downs with 2 yards to go or less. They only converted one of them, a 2-yard quarterback sneak by Rudolph. The other six plays featured five incompletions and a 1-yard loss by running back Trey Edmunds, who began the season on the practice squad but now finds himself second on the depth chart.

“We’ve just got to execute,” running back Jaylen Samuels said. “When they send pressure on third downs, we’ve got to pick it up with our pass protection. Receivers have got to make tough catches. Mason’s got to make good throws. Everybody’s got to execute. That’s the main thing.”

Having healthy, capable and eligible bodies would help. There haven’t been many to go around of late, and Pouncey’s absence will only make things more difficult. The seven-time Pro Bowl’s appeal on his suspension will be held Tuesday. While there’s a chance it may be reduced, the odds of it being lifted are practically nonexistent.

“Hopefully we can get him back soon,” DeCastro said.

B.J. Finney will likely start until Pouncey returns. Finney’s filled in capably at several offensive line spots, including center, during his four-year career. Yet for a team with limited playmakers, losing a player with Pouncey’s capabilities only further decreases Pittsburgh’s margin for error, one that may be nonexistent if Smith-Schuster and Johnson aren’t cleared in time to face the Bengals.

If neither can go it means only one receiver who began the season on the two-deep depth chart — James Washington — will be available. The Steelers cut Donte Moncrief late last month and placed Ryan Switzer on injured reserve last week. Rudolph ended the Cleveland game throwing to Washington, Johnny Holton and practice squad graduate Tevin Jones, who caught two passes in his NFL debut.

The Steelers added some depth in the wake of the injuries, signing rookie wide receiver Deon Cain and rookie running back Kerrith Whyte Jr. to the 53-man roster and placing wide receivers Quadree Henderson and Amara Darboh and running back Ralph Webb on the practice squad. Combined career total yards from scrimmage: 123 yards.

Cain — who was on Indianapolis’ practice squad — wasn’t surprised when his phone rang with an offer from the Steelers. He caught the Browns’ game. It wasn’t hard to put two and two together.

“Once I watched the game and kind of seeing everything that went down, I was like, ‘OK. You guys do need a little bit of help around here,’” Cain said.

Maybe more than a little bit. Pittsburgh’s schedule down the stretch remains user-friendly — only two of its final six games are against teams with winning records — but considering the ever-expanding injured list, nothing is guaranteed.

“They’re in a run to get into the playoffs,” Cain said. “So they need some immediate playmakers. That’s definitely me. I just want to come in here and show them what I’ve got.”