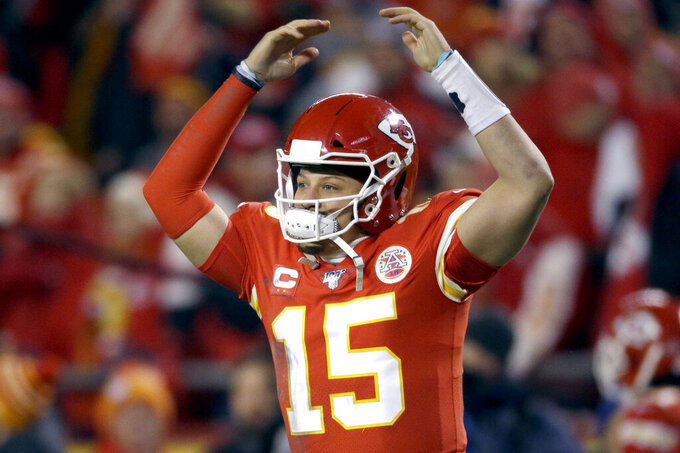 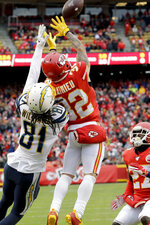 The Titans haven't been to the Super Bowl since 2000. That's barely a blip on the football history screen: The Chiefs haven't been there since 1970. One of them is headed for the big game in Miami. Here's how they match up for the AFC championship:

WHEN TENNESSEE HAS THE BALL

Run. Then run again. Derrick Henry (22) has been sensational in the postseason after leading the league in rushing. Powerful and fast, elusive enough and versatile, he's a defensive nightmare. The Titans will stick with him until the Chiefs prove they can slow him down, something they never did in Week 10. That onus will fall on a D-line led by Chris Jones (92) and Frank Clark (55), LBs Anthony Hitchens (53) and Damien Wilson (54) and, likely, safeties Tyrann Mathieu (32) and Daniel Sorensen (49), who had a huge game last week.

The Chiefs like to go with five defensive backs, but they might need more bulk on the field against Henry. Dealing with a blocking unit paced by LT Taylor Lewan (77), who is a stud when he isn't collecting far too many penalties, veteran LG Rodger Saffold (76) and RT Jack Conklin (78) will be a chore for KC.

QB Ryan Tannehill (17) is 2-0 in the postseason despite barely throwing the ball. When he has — he led the league in passer rating at 117.5 — Tannehill has been effective enough, including two TD throws vs. Baltimore.

Also intriguing will be the Chiefs' vastly improved secondary against a group of somewhat obscure wide receivers led by rookie A.J. Brown (11). Tannehill plays no favorites and also targets any of his three tight ends. He needs to watch out for ball-hawking Mathieu, while the loss of rookie safety Juan Thornhill (22) could damage KC's coverage.

WHEN KANSAS CITY HAS THE BALL

Expect fireworks. Maybe not the kind that led to 41 consecutive points against Houston after the Chiefs fell behind 24-0, but some explosiveness for sure.

The catalyst, naturally, is QB Patrick Mahomes (17), who was slowed by injuries early and midway in the season. Now that he's healthy, Mahomes is looking like the 2018 league MVP who tore up the NFL.

Given time — and Tennessee has not displayed an overwhelming pass rush — Mahomes can pick apart any defense, even one as resilient as the Titans. His symbiosis with TE Travis Kelce (87) keys the attack, but he also has game-breaking WRs Tyreek Hill (10) and Sammy Watkins (14) and lightning-fast rookie Mecole Hardman (19).

Damien Williams (26) handles the bulk of the run game, and Tennessee has been formidable against the rush. Not just stopping fourth-and-1 plays, either. The Chiefs' best blockers, RT Mitchell Schwartz (71) and LT Eric Fisher (72), need to control the trenches against underrated DT Jurrell Casey (99) and his chums, who never backed down against the Patriots or Ravens.

Harold Landry (58) led the Titans with nine sacks and Kamalei Correa (44), who had five, has a quick burst to the quarterback, while Tennessee might have the league's top secondary with safeties Kevin Byard (41) and Kenny Vaccaro (24) and cornerbacks Logan Ryan (26) and Adoree' Jackson (25). It will definitely be tested Sunday. Ryan was a busy guy with 113 tackles, four picks and four forced fumbles this season.

Titans All-Pro Brett Kern (6) is the league's best punter, kicking them high and far. But don't ask about PK Greg Joseph (7) because he hasn't attempted a field goal since joining the team in December.

The Titans didn't have a touchdown on any kick returns, nor did they yield any. They did block the Chiefs' sixth field-goal attempt to clinch a November game victory. Joshua Kalu said that after seeing Kansas City try so many field goals, it gave him a chance to time up the snap thanks to a head bob by the long snapper.

Kansas City, though, started its comeback against the Texans when Hardman broke free on a kickoff run-back. He had a 104-yarder in the regular season. Hill fumbled a punt return that led to an easy score for the Texans last week.

Harrison Butker (7) is a reliable placekicker with good range. He did miss three extra points, one fewer than his misses on field goals.

Veteran punter Dustin Colquitt (2) had a kick blocked by the Texans for a TD. He's generally reliable.

Andy Reid has something close to a Hall of Fame resume, and a second trip to the Super Bowl — he lost with Philadelphia in 2005 — certainly would enhance that.

Reid has been masterful in his handling of Mahomes and the schemes that make KC's offense as dangerous as any. He was wise enough to bring in an aggressive defensive coordinator after last year's debacle on that side of the ball cost the Chiefs a shot at the NFL title. It took a while before Steve Spagnuolo's system took hold, and it didn't look too great in last week's victory over Houston. But it's far more formidable than in 2018.

Mike Vrabel has created a no-fear culture in Nashville. That has been most evident in the past three weeks, when the Titans would have been done with a loss. Offensive coordinator Arthur Smith is wise enough to stick to the run game, but funky enough to come up with things such as Henry's jump pass for a touchdown at Baltimore.

The Chiefs haven't been to a Super Bowl since 1970. Yes, a half-century. That's incentive enough.

Also take into account how close they came last year, with an overtime coin toss and penalty by ex-linebacker Dee Ford playing a huge role in their falling short of the Super Bowl.

Tennessee has never won an NFL championship, whether living in Music City or in Houston. The Titans also are a sixth seed, which means they're the underdog each week.

Not that it's mattered so far.