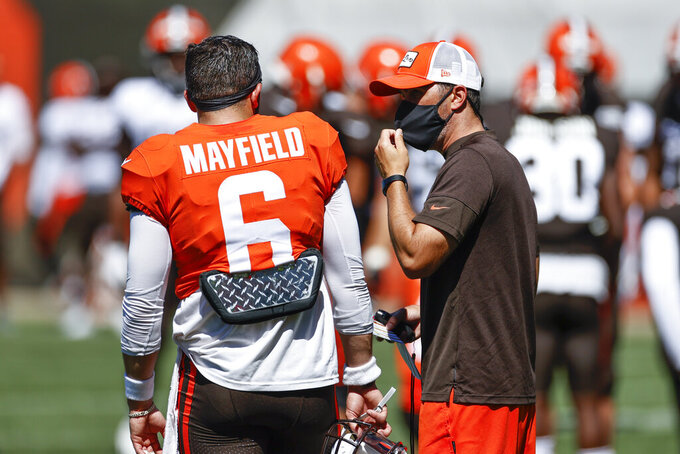 FILE - Cleveland Browns head coach Kevin Stefanski, right, talks with quarterback Baker Mayfield, left, during practice at the NFL football team's training facility Wednesday, Aug. 19, 2020, in Berea, Ohio. Teams with new coaches or new quarterbacks could limit their playbooks early in the season because they missed valuable practice time in the offseason due to the coronavirus shutdown. Mayfield is learning his third offense in three seasons. (AP Photo/Ron Schwane, File)

Teams with new coaches or new quarterbacks could limit their playbooks early in the season because they missed valuable practice time in the offseason due to the coronavirus shutdown.

If so, they're not telling.

Even Tom Brady has found it challenging to learn a new system and he’s a six-time Super Bowl champion.

“I really haven’t had to do that in 19 years, so you forget, ‘Man, that’s really tough,’ like all of the different terminologies,” Brady said early in his first training camp with the Tampa Bay Buccaneers.

Brady and Bucs coach Bruce Arians early on had conversations about the concepts that make him most comfortable.

“His biggest thing was learning what we do, learning our language,” Arians said. “Then he and I sat down a while back (and discussed) what were his favorite concepts. We probably had most of them already in our offense, we just called them something different. That’s been a good collaboration so far, but that took place way back.”

In Cleveland, Mayfield is learning his third offense in three seasons.

“I would not say we have simplified it,” Browns first-year coach Kevin Stefanski said. “There are some things in the spring that you try out that are new to what you have done and you are putting in the laboratory, so to speak. I would say we did not do that this year, but I would not go as far as to say we simplified things.”

Mayfield is making more critical evaluations in practice as the season opener draws near.

Like Mayfield, Jones has had to learn a new offense each of his first two seasons in New York.

“I’ve been focused on and just trying to pick up the plays and the system and how he wants things to be run,” Jones said of Garrett, the former Dallas Cowboys coach. “I’ve enjoyed working with him. I think the detail to what he wants and how he wants it to be done is something I’m continuing to focus on and try to learn from.”

The Cowboys have a new coach, Mike McCarthy, but offensive coordinator Kellen Moore was retained. McCarthy is sticking with much of what Prescott did best and giving Moore play-calling duties.

“The individual that’s had to learn the most has been me,” McCarthy said earlier this month.

Rivers joined a new team after 16 seasons with the Chargers, but he has plenty of familiarity in Indianapolis. Colts coach Frank Reich and offensive coordinator Nick Sirianni previously worked with Rivers in San Diego.

“The techniques and the way we run routes is the same as I’ve been used to since 2013,” Rivers said. “That’s been very helpful that I know how the route is being taught here, so we’re not speaking any different language.”

“The beautiful thing is there’s a lot of similarities in the offense from my Philly offense,” Foles said. “So I feel right back at home, whether it’s the run game, the pass game, there are similarities. It’s been a year since I was in that offense, but it’s nice to have that verbiage and have that feel and understand why we’re doing it.”

Haskins is learning his third offense in three season, going back to his final year at Ohio State. Washington coach Ron Rivera brought former Panthers quarterbacks coach Scott Turner with him to serve as offensive coordinator.

“The concepts are the same (as the 2019 playbook), the reads are the same, just told differently,” Haskins said of the offense.

Carolina is the only team with both a new coach, Matt Rhule, and new starting quarterback, Bridgewater.

“I think we are completely up to speed in terms of what we know and what we are good at,” Rhule said. “Our time on task on things is way less than having it done it for the last four or five months. I think we will have to be smart about what we do and making sure we do things the right way."