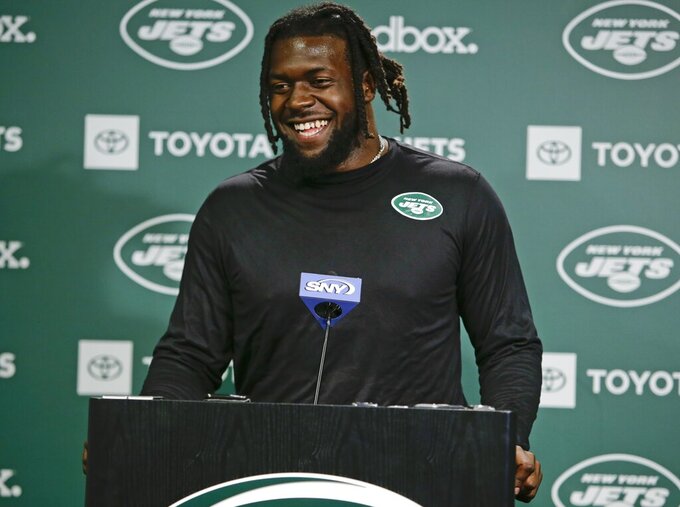 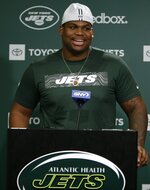 FLORHAM PARK, N.J. (AP) — Quinnen Williams stepped through the doors of the New York Jets' training facility for the first time and couldn't help but get a bit starstruck.

The No. 3 overall draft pick looked around and saw his new NFL teammates — guys he once knew only from watching TV and playing video games.

It might seem wacky right now, but Williams knows he certainly belongs — even without video game controllers in his hands.

The playmaking defensive lineman was considered by many to be the best overall talent available in this year's draft, arguably the safest pick a team could make.

Now, he's going to be a 6-foot-3, 303-pound building block in coordinator Gregg Williams' defense. The former Alabama star was a stubborn run stuffer and punishing pass rusher for the Crimson Tide, and will likely be asked to fill similar roles for the Jets while lining up at different spots on the line.

"Wherever they put me, I'll play," Quinnen Williams said, flashing a mouthful teeth covered by braces. "If they put me on kickoff returns, I'll go crazy. They can put me at anything, and I'm going to try to dominate."

He joins a defensive line that includes Leonard Williams, Steve McLendon, Henry Anderson and Nathan Shepherd. So, adding another player to one of the team's strengths wouldn't seem to have been a priority entering the draft.

But when Quinnen Williams was still sitting there at No. 3 and the Jets found no acceptable trade options to move down in the first round, New York couldn't resist.

"Any time you have a guy that we see as a really talented player, a guy that put a lot of good tape out there his last year in college, and add that to the group we already have, I think it's really going to be something that could help our defense, especially up the middle," coach Adam Gase said. "The push up the middle is going to be big for us, especially in this division."

That, of course, mostly means getting to Tom Brady and trying to end New England's 10-year reign atop the AFC East.

Speaking of the Patriots quarterback, Quinnen Williams was asked if sacking Brady would be a sweet moment in his young career.

"It's crazy because Tom Brady started playing in the NFL before I was born," said the 21-year-old lineman.

Well, not quite. Quinnen Williams was born in 1997 and Brady broke into the league in 2000 — but you get the idea.

"To sack him, it would be amazing," he said. "Just to get a sack and just being in the NFL is amazing, so just to get a tackle in the NFL, a tackle for loss, just to play a down, it's a dream come true for me because I get to play at a high level. So, getting a sack will be like icing on the cake."

While he was considered a sure-thing prospect entering the draft, Jachai Polite was anything but.

The outside linebacker was a force at times for Florida, a mix of speed, athleticism and power coming off the edge that had some considering Polite a potential first-rounder.

But then came some up-and-down performances, a hamstring injury that hampered him at the NFL combine in February — and some shaky interview sessions and perceptions that he was immature.

"It just opened my eyes to the real world," Polite recalled. "It was just a humbling experience."

Polite slid to the third round, and that's where the Jets pounced. And, he's eager to prove they made the right call.

"They took a chance on me," he said. "I'm surrounded by great people, so I have no choice but to change and be great."

The Jets were well aware of the questions surrounding Polite, but met with him and felt comfortable that he could come to New York and thrive — on and off the field.

"I don't think a lot of us had it all figured out at 21," Gase said. "Whatever happened in the past is irrelevant to me. Moving forward, it's just going to be on him to do the right things and worry about what he can control, which is show up every day, be on time, know what you need to do, go out there and practice hard.

"He does that, it'll be smooth sailing for him."

And, perhaps not so much for opposing quarterbacks.

Polite also was asked who would be the first quarterback he'd like to sack in the NFL.

"The first one we play," the rookie said with a chuckle.

In that case, Josh Allen and the Buffalo Bills better be ready when the regular season opens Sept. 8.

Polite enjoyed watching Dwight Freeney as a kid, particularly how the star pass rusher would zip past blockers on his way to taking down quarterbacks.

"I liked the spin move a lot," Polite said before being asked to grade his own move. "It's all right. It's not like his — yet. It's going to get there."

NOTES: Gase reiterated that he's not concerned Bell hasn't taken part in voluntary workouts but said the running back told him he'd be with the team for mandatory minicamp next month. "We know where he is," Gase said. "He's working out. Every year that he's played, he's been ready to go." ... Gase rebuffed recent reports that there was tension between him and GM Mike Maccagnan. "Unless I say it, it's really irrelevant to me," Gase said. "It kind of (ticks) me off a little bit, because we have discussions on everything. That's our job."