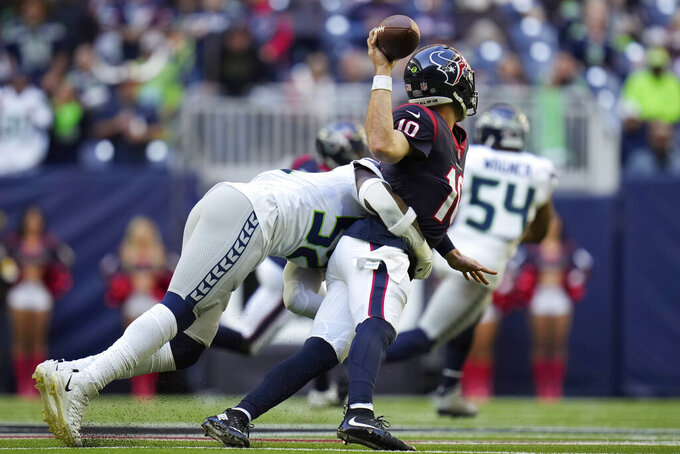 Houston Texans quarterback Davis Mills (10) is hit by Seattle Seahawks defensive end Darrell Taylor (52) as he tires to pass during the second half of an NFL football game, Sunday, Dec. 12, 2021, in Houston. (AP Photo/Eric Christian Smith)

HOUSTON (AP) — Seattle’s Tyler Lockett and Hall of Famer Steve Largent share a birthday and were both born in Tulsa, Oklahoma.

The pair now has another thing in common after Lockett’s big game Sunday helped the Seahawks (5-8) to a 33-13 win over the Houston Texans (2-11).

Lockett had 142 yards receiving to give him 1,023 yards this season. He joins Largent as the only players in franchise history to have at least 1,000 yards receiving in three straight seasons.

Russell Wilson threw for 260 yards and two touchdowns to help the Seahawks win consecutive games for the first time this season. It was Wilson’s 89th game with two TD passes or more, passing Dan Marino (88) for second-most such games in a player’s first 10 NFL seasons. Hall of Famer Peyton Manning is first with 92.

Seattle coach Pete Carroll earned his 150th regular-season win a week after the Seahawks (5-8) beat San Francisco 30-23. He did it in front of a sparse crowd that appeared to have more Seattle fans than Houston followers. Neon green shirts peppered the stands and chants of “Seahawks, Seahawks,” echoed through the stadium throughout the game.

“It felt like a home game,” said left tackle Duane Brown, who was traded to Seattle in 2017 in his 10th season in Houston.

Wilson threw a 55-yard TD pass to Lockett in the second quarter and his 1-yard pass to Gerald Everett and 2-point conversion to Lockett made it 27-13 with about 7½ minutes left.

Carroll was effusive in his praise for Lockett.

“This was another masterpiece today,” Carroll said. “The body control, the explosiveness ... just such a graceful, beautiful athlete.”

Carroll likened Lockett to Lance Alworth, who had a Hall of Famer career with San Diego and Dallas from 1962-72. Wilson weighed in on the comparison.

“I don’t think there’s anyone like Tyler Lockett," he said. “He’s a smaller player, but he plays big. (Our) connection is really remarkable."

Rashaad Penny ran for a career-high 137 yards with two touchdowns. He scored Seattle’s first touchdown on a 32-yard run in the first quarter and his 47-yard scamper extended the lead to 33-13.

“We’re so happy to see that," Carroll said. “We’ve been waiting. Thrilled to see he really got loose."

Rookie Davis Mills threw for a career-high 331 yards and a touchdown starting in place of Tyrod Taylor, who was benched after the Texans (2-11) were shut out 31-0 by the Colts last week. He looked great early, completing his first 14 attempts to set a franchise record.

But he struggled after that, completing 19 of 35 passes to fall to 0-7 as a starter as the Texans were shut out in the second half.

“He took care of the ball. That’s what he’s supposed to do," coach David Culley said. “Unfortunately, we weren’t able to get the ball in the end zone in the second half, and that’s what we have to do better. Not just him, but our entire offense has to be able to do that."

Mills put the Texans up early when he found rookie Brevin Jordan on a 5-yard touchdown pass on the first drive.

The Seahawks were down 7-3 when Penny's first touchdown gave them the lead. Justin Reid was in position to tackle him, but Penny stiff-armed him and dashed to the end zone.

Houston tied it with a field goal midway through the second quarter, and there was less than a minute left in the second quarter when Wilson threw his strike to Lockett. Jason Myers' extra point was no good to leave Seattle up 16-10.

Lockett landed face down on the turf after his score and remained there for a few seconds acting as if he was swimming to celebrate.

Seahawks: DT Bryan Mone sprained his knee in the second quarter and didn’t return. ... CB Gavin Heslop was carted off the field late in the fourth quarter with a left leg injury. Carroll said the injury was serious and he is expected to spend the night in Houston. ... Carroll said DB D.J. Reed has a bruised chest.

The Texans cut the lead to three at halftime when Kaʻimi Fairbairn set a franchise record with a 61-yard field goal as time expired in the first half. The kick bested 57-yard field goals made by both Kris Brown and Neil Rackers. Fairbairn’s previous career-long field goal was 55 yards.

Seahawks: visit the Rams next Sunday.