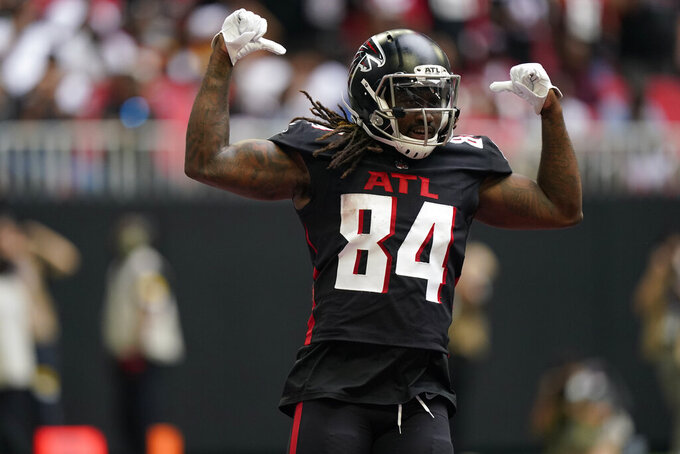 Atlanta Falcons running back Cordarrelle Patterson (84) celebrates his touchdown against the Washington Football Team during the first half of an NFL football game, Sunday, Oct. 3, 2021, in Atlanta. (AP Photo/Brynn Anderson)

OPENING LINE: Atlanta by 3, according to FanDuel SportsBook.

TURNOVER DIFFERENTIAL: Jets minus-6; Falcons minus-2.

JETS PLAYER TO WATCH: Zach Wilson. The rookie quarterback is coming off his best all-around game as a pro, going 21 of 34 for 297 yards with two touchdowns and an interception, which came when a receiver slipped on a route. Wilson got off to a rough start in the Jets’ first three games, but certainly showed flashes last Sunday of why he was the No. 2 overall draft pick. His 53-yard touchdown pass to Corey Davis made all the highlight reels as he scrambled to his right, pointed and waved for Davis to go deep – and then hit him in stride. It was a coming out party for Wilson, who can really start feeling good about himself if he can build on that performance.

FALCONS PLAYER TO WATCH: Kyle Pitts. The Falcons will be limited at wide receiver with Calvin Ridley held out due to a personal matter and Russell Gage sidelined with an ankle injury. The shortage at wide receiver opens the way for Pitts, the rookie tight end who was the No. 4 overall selection in the NFL draft, to receive more targets. Pitts has 15 catches for 189 yards and no touchdowns. His 26 targets are second on the team to Ridley.

KEY MATCHUP: Jets WR Davis vs. Falcons secondary. Davis has an opportunity to show off in front of Falcons coach Arthur Smith, his former Titans offensive coordinator. Davis has three of the Jets’ four TD catches. The Falcons’ already vulnerable secondary just lost nickel back Isaiah Oliver to a season-ending knee injury and also could be without starting safety Erik Harris, who has a calf injury.

SERIES NOTES: The Falcons have won three of the last four against the Jets. New York’s only win in the series in this century came in 2013. ... The Jets have fared better as the visiting team, winning three of six games, than as the home team, losing four of six. ... Atlanta won consecutive games in 2005 and 2009. ... Ryan passed for 254 yards and two TDs and DT Grady Jarrett had a career-high three tackles for losses in the 25-20 win in 2017 in New York.

STATS AND STUFF: While the Jets rank 32nd with their average of only 11.8 points scored, the Falcons rank 32nd while allowing 32 points per game. ... The Jets won their previous trip to London, beating Miami 27-14 at Wembley Stadium in 2015. ... Jets chairman Woody Johnson served as the U.S. ambassador to the United Kingdom from 2017-21 under President Donald Trump. ... Smith interviewed with the Jets for their coaching vacancy last offseason before New York hired Robert Saleh. ... Wilson has completed 11 passes of 25 or more yards this season, tied for the fourth most in the league. He’s the only rookie quarterback to complete 10 or more such passes this season. ... The Jets had seven sacks last week against Tennessee, giving them 13 for the season. That ties New York with Minnesota for fourth in the league – one behind Carolina and Cleveland, and two behind league-leading Chicago. ... DL Quinnen Williams had two sacks last week, while older brother Quincy, a LB, had one – making them the first pair of brothers on the same team to each get a sack in the same game. ... The Jets’ defense has a league-high 1,029 snaps from rookies or second-year players, including CB Bryce Hall (271), CB Michael Carter II (182), DL Bryce Huff (148), CB Javelin Guidry (147) and CB Brandin Echols (138). ... This will be the Falcons’ second game in London, following a 22-21 loss to Detroit at Wembley Stadium in 2014. ... Cordarrelle Patterson last week became the first Falcons running back with three TD catches in a game. ... Ryan had his 13th career game with at least four TD passes last week, passing Hall of Famers Dan Fouts, Fran Tarkenton and Sonny Jurgensen on the NFL list. ... LB Foye Oluokun has had at least 12 tackles in back-to-back games. ... Pitts leads rookie tight ends with his 15 catches for 189 yards.

FANTASY TIP: Despite having the three TD catches, 82 receiving yards and 34 rushing yards, Patterson was overlooked in the fourth quarter last week. Smith said he trusts RB Mike Davis but acknowledged second-guessing some play-calling decisions. That may mean Patterson has a good opportunity to bolster his status as a fantasy breakout this week. He’ll be looking for his third consecutive game with at least 100 scrimmage yards and fourth consecutive game with at least five catches.