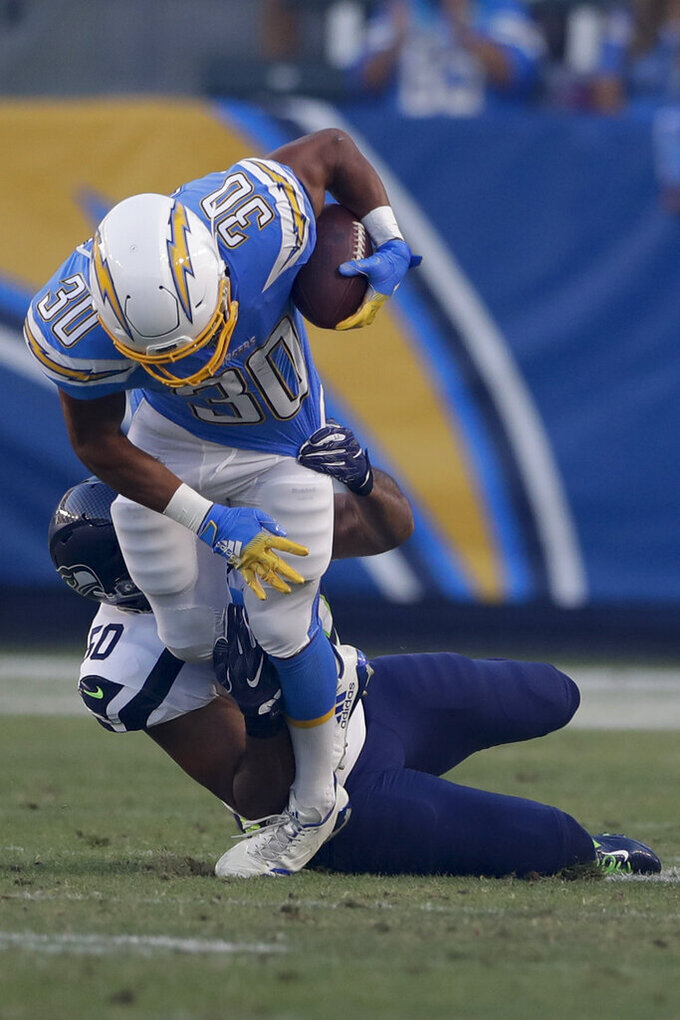 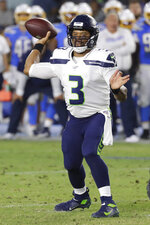 Seattle's eight-year veteran led a pair of first-half touchdown drives and accounted for 104 yards, helping the Seahawks to a 23-15 victory over the Los Angeles Chargers on Saturday night.

"I think we feel great. We executed everything we wanted to do," said Wilson, who completed 6 of 9 passes for 73 yards and had 31 rushing yards. "We ran the ball really well and got some balls down the field."

Wilson has directed the Seahawks to a pair of TDs and a field goal in five possessions in two preseason games. It is unlikely that he will play in Thursday's preseason finale against Oakland as Seattle opens the regular season on Sept. 8 against Cincinnati.

"We've been ready to go. I'm glad these two games were on the road and get that feeling of the rush and what that feels like," Wilson said.

Seattle's rushed for 125 yards and averaged 6.0 yards per carry during the first half. C.J. Prosise (5 carries, 32 yards) and Rashaad Penny (8 carries, 22 yards) scored touchdowns while Chris Carson had 23 yards on three attempts on the first drive.

"We really wanted to run the football and be efficient," Seattle coach Pete Carroll said. "The running backs did a real nice job and that's a tribute to the system."

The Seahawks (2-1) were at their own 38 to start the second quarter when Wilson connected for 20- and 30-yard completions to Tyler Lockett. On fourth-and-1 from the Los Angeles 3, Penny barreled into the end zone to put Seattle up 7-3 with 11:30 remaining.

Wilson, who had 31 yards rushing on three carries, took advantage of a short field on the next possession after the Chargers turned it over on downs. He threw an 18-yard pass to Jaron Brown on second-and-18 to move Seattle to the Los Angeles 31. Four plays later, Prosise went up the middle from a yard out to extend the lead to 13-3.

Philip Rivers and Keenan Allen did not suit up for a third straight game, with Chargers coach Anthony Lynn sticking to his pre-training camp plan of resting his veterans. With Melvin Gordon continuing to hold out, the running game struggled as Austin Ekeler and Justin Jackson combined for 23 yards on nine carries.

The offensive line also continued to have its difficulties. Tyrod Taylor was on the run most of the time, finishing 6 of 9 for 61 yards in three possessions. Taylor also was the Chargers' leading rusher with 34 yards on six carries.

"For three quarters there wasn't a whole lot to be excited about in my opinion," Lynn said. "We did not do a good job of containing their quarterbacks."

Easton Stick led the Chargers to a pair of scores in the fourth quarter to get them within eight.

The fifth-round pick had an 8-yard strike to Andre Patton with 9:26 remaining. Stick then ran around right end from 4 yards out on the next drive to get the Chargers within 23-15.

"I started looking left and just didn't see anybody open. Andre did a good job separating from his guy and made a play," Stick said about his pass to Patton.

Los Angeles (0-3) had the ball late in the fourth but the drive stalled on its 48 when a wide-open Justice Liggins slipped on a pass on fourth-and-10.

Former Charger Geno Smith was 11 for 18 for 117 yards as he battles Paxton Lynch for the Seahawks' backup spot. Smith also ran for a 9-yard TD during the third quarter to put Seattle up 23-3. Lynch did not play after taking a helmet-to-helmet hit in the last game at Minnesota.

Cardale Jones and Stick are competing for the Chargers' third spot. Jones, who was 4 of 5 for 50 yards, has played well the last two games while Stick bounced back after struggling last week against New Orleans.

"They are competing. It very well could," said Lynn when asked if the last QB spot could be the final roster decision.

The teams combined for three missed extra points. Los Angeles' Ty Long was 0 for 2, going wide left and having another blocked.

Lynn has tried to give his beleaguered offensive line some confidence by going for it on short yardage on fourth down in two preseason games, but it has backfired. The Chargers went for it twice against the Seahawks and came up empty as Seattle converted the missed opportunities into nine points.

"I'm going to watch the tape before I decide if it was a lack of execution tonight, but it surely has been that in the past," Lynn said. "I expect us to get the job done and we did not get that done."

Seahawks: Conclude the preseason by hosting Oakland on Thursday night.

Chargers: Travel to San Francisco on Thursday night for their preseason finale.

This story has been corrected to show that Wilson is an eight-, not nine-year veteran.